The quarries and the wedges -- here we go again 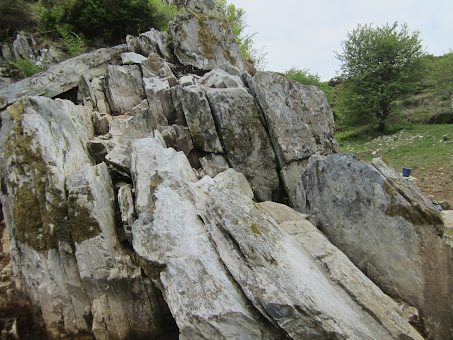 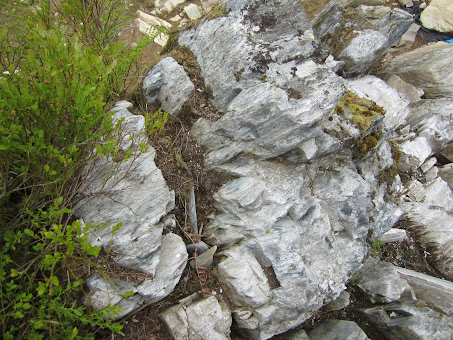 Rhosyfelin -- every fissure is packed with detritus.  Were some of the fragments put there and used as wedges in the process of quarrying?  Let's see the colour of the evidence.......
More fun and games:
Reconstructing extraction techniques at Stonehenge’s bluestone megalith quarries in the Preseli hills of west Wales,
Mike Parker Pearson, Richard Bevins, Nick Pearce, Rob Ixer, Josh Pollard, Colin Richards, Kate Welham
Journal of Archaeological Science: Reports, Volume 46, 2022, 103697,

Excavations at two of the sources of Stonehenge’s bluestones in Mynydd Preseli, west Wales, have led to the discovery of stone tools associated with megalith quarrying in the final centuries of the fourth millennium BC, shortly before the suspected date of the bluestones’ erection at Stonehenge, 240 km away. Among the most plentiful of these tools are stone wedges, three of which were found in situ at the rhyolite bluestone quarry of Craig Rhos-y-felin. Two of these were positioned in the joints of a rhyolite pillar adjacent to a recess left by a removed pillar. Geochemical analysis reveals that these and the third wedge are of compositions different to the rock on either side of the cracks into which they had been driven, confirming their identification as quarrying tools. This research sheds new light on the methods used to extract the stones for Stonehenge.
We have been here before, with reports of soft shale wedges in cracks and crevices at Carn Goedog and with mentions of "tools" at Rhosyfelin as well.  We have all seen abundant debris in cracks in the foliated rhyolite crag, derived from rockfall material and also from glacial and fluvioglacial deposits brought in to the site during the last glacial episode.
But let's see the evidence before assessing the reliability of the claims being made.  Unfortunately the article is behind a paywall, so I have not been able to read it.  Perhaps somebody will be kind enough to send me a PDF........ 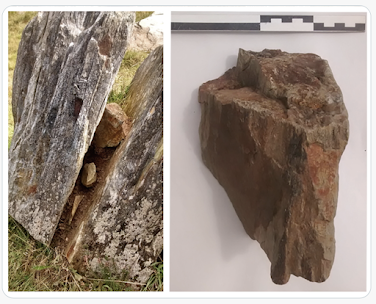 One of the fissures near the tip of the spur at Rhosyfelin, and one of the so-called stone wedges.
Courtesy Tim Daw and Twitter. 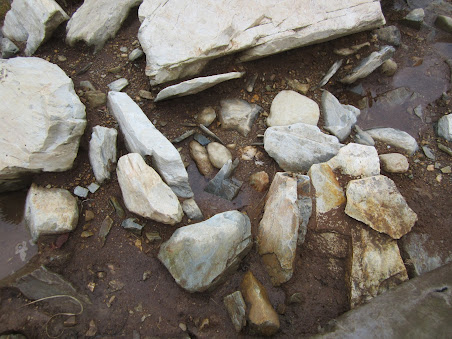 Glacially transported clasts and detached rhyolite blocks near the tip of the spur.  Note that some of the clasts are wedge-shaped........
==========================
PS.  We have had some previous discussion about wedges here:
https://brian-mountainman.blogspot.com/2018/08/more-from-megalithic-quarrymen-3.html