Darvill on the Waun Mawn myth 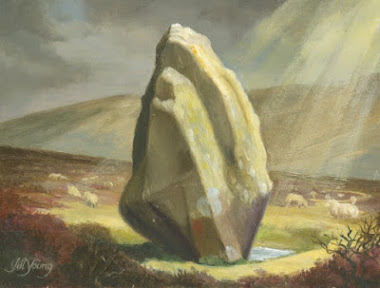 Waun Mawn -- a place of small and unremarkable stone settings in an unexceptional Neolithic landscape........ and let's just forget about the mythology.
I have been taking a closer look at Tim Darvill's article about Waun Mawn and the interpretations of it by Parker Pearson and his colleagues.  First, the details:

Darvill, T. (2022). Mythical rings? Waun Mawn and Stonehenge Stage 1. Antiquity, 4 November, pp 1-15.
https://www.cambridge.org/core/journals/antiquity/article/mythical-rings-waun-mawn-and-stonehenge-stage-1/2F089B76AA2411BB09DBAFE79060101F
ABSTRACT
In a recent Antiquity article, Parker Pearson and colleagues (2021) presented results from excavations at Waun Mawn in south-west Wales, interpreting the site as a dismantled stone circle and source for some of the Bluestone pillars used in the Aubrey Holes at Stonehenge. Here, the author examines the evidence, showing that alternative interpretations are possible. Waun Mawn is argued to represent a series of smaller stone settings, typical of ceremonial sites in south-west Wales. Meanwhile the Aubrey Holes are shown to reflect a well-established regional sequence in which post circles are followed by pit circles. A Welsh ‘source-circle’ for Stonehenge cannot be excluded but, the author argues, the claim is unsupported by the current evidence.
Well, that's all very polite, but the essential takeaway is that MPP and his colleagues are accused of myth-making both at Waun Mawn and Stonehenge and of building an unsupportable narrative on the basis of very flimsy field evidence.
Darvill starts by questioning the evidence of sockets or stone-holes, suggesting that many of them never did hold monoliths or were even designated to hold monoliths that failed to arrive.  The so-called sockets are not regularly spaced or accurately placed and appear -- if they mean anything -- to be simply small independent settings fairly typical of the neighbourhood and indeed of other parts of the British Isles.  Quote:  "..... at the proposed Waun Mawn circle, long stretches of the circumference are completely lacking in stones or empty sockets, the few stones and putative sockets that are recorded are irregularly spaced and of different shapes and sizes, and there is no entrance setting."  He suggests that the "lost circle" is a figment of the imagination, and that the evidence thrown up in three digging seasons is inadequate to support the hypothesis.  The wide gap in the NE quadrant of the assumed circle is quite inadequate to support the assumption that this was an astronomically aligned "entrance".
Darvill also questions the highly selective use of radiocarbon and OSL dates, and suggests that "Waun Mawn saw considerable activity over a long period of time; it was a persistent place within a wider landscape rich in prehistoric remains."  That matches my interpretation and the interpretations of others.
He also argues that some of the shallow pits in the ground surface are simply stone removal hollows associated with "field clearance" or with stone settings that had nothing to do with the excavated Waun Mawn site.
Quote:  The excavated evidence, taken together with that of other monuments documented in the vicinity, suggests that Waun Mawn was a small but long-lived ceremonial site. It probably developed a special meaning long before 5000 BC, and one or more standing stones might have been set up at that time. By the later fourth and early third millennium BC, the complex comprised one or perhaps two short stone rows and a stone pair. These lay at the focus of a wider ceremonial landscape that included a stone pair at Tafarn y Bwlch, 180m to the south-west, a standing stone, 200m to the west, and ring-cairns and hut-circles a similar distance to the north. During the late second and first millennium BC, elements of these focal structures fell or were robbed, leaving the remains much as we see them today.
I think that's a reasonable and conservative interpretation of what we see on the ground today and of the evidence that emerged during and after the 3 digging seasons.
Then Darvill gets onto the proposal that the Aubrey Holes once held bluestone monoliths.  Quote:  The suggestion that Bluestones from west Wales once stood in the Aubrey Holes around the inner edge of the inner bank is an intriguing one but is not supported by the currently available evidence.
Quote:  "None of the Aubrey Holes excavated during the twentieth century contained Bluestone in either their primary or secondary fills."   I'm not sure about that, because even in the most careful of analyses of the Aubrey Hole evidence (in Cleal et al, 1995) many occurrences of bluestone fragments in awkward positions are explained away because of the prevailing belief that there was an "arrival date" for the bluestones!  I have covered this in earlier blog posts........
Anyway, I will not get into the Aubrey Hole debate in any detail, because that's outside my territory.
I will also part company with Darvill over his belief that the Stonehenge bluestones were "imported from West Wales", since there is actually not a shred of evidence to support that contention.
Finally, the last paragraph of the article Darvill draws attention to the inadequate nature of the geological work relating to Waun Mawn -- something I have repeatedly pointed out on this blog.
All in all, this is a very measured and civilised assault on the Waun Mawn myth, drawing attention to "over-simplification and the need for caution" and stating that the claims made by MPP and his colleagues "do not stand up to close scrutiny."  Waun Mawn is re-interpreted as the location for a relatively minor stone setting in an interesting but unexceptional Neolithic landscape that had nothing whatsoever to do with Stonehenge.
Posted by BRIAN JOHN at 13:19

I am very inclined to now correspond with Professor Tim Darvill at Bournemouth University, first of all to thank him for citing Brian's Greencroft Working Paper on Waun Mawn, and secondly to ask him to consider seriously Brian's firmly - held contention that the recently rediscovered "Newall 1924" boulder excavated at Stonehenge,is clearly glaciated (see the Blog Posts dated shortly after our visit together to Salisbury Museum on June 14th, where the Director, Adrian Green, gave us the opportunity to examine and photograph this cone - shaped boulder).