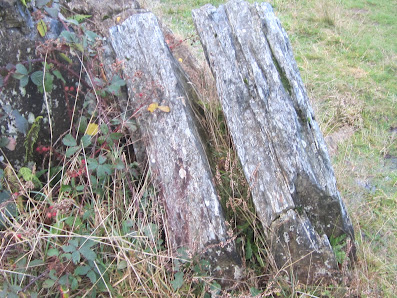 The small slab near the tip of the spur, split into two slices.  In the gap between the two, the geologists claim to have discovered two stone wedges and a hammerstone.  The complete slab was probably separated from the main rock outcrop long before any human occupation of this site.  Neither of these small slices would have been of any use as a standing stone.

It was very pleasant down at Rhosyfelin today, in between the showers.  More on the latest paper from the Rhosyfelin quarrymen.....

I have been taking a look at the places at Craig Rhosyfelin from which the "quarrying wedges" were taken for analysis by Richard Bevins and his colleagues.  You will recall that they were claimed by Parker Pearson et al to be wedges used to force cracks or crevices apart by percussion with "soft hammers" -- with the object of obtaining monoliths for use in stone settings.  But then they also claimed to have found at least one stone with percussion damage on it, which presumably means it was a hard hammer.  And why would one bother to use wedges, levers and hammers (either soft or hard) to extract large bits of rock from the rock face when there are scores of slabs, boulders and pillars of all shapes and sizes lying around in the rockfall debris, ready to be picked up and carted away?

There are several issues here.  I can't argue about the evidence on the so-called wedges, because they have been taken away -- except to say that I see no difference (in the photos) between them and a multitude of other bits and pieces found in cracks and fractures across the whole width of the rock cliff exposure.

The crack from which stones 133, 134 and 135 were taken was filled with debris which was cleared away by the geologists.  This debris is simply referred to as "the same sediment as that formed around the Neolithic hearth."  That's not good enough.  There is a strong probability that the sediment was the same rockfall debris as that found in many other cracks in the vicinity, and that it had nothing whatsoever to do with the hearth. According to Fig 7 and Fig 9 in the article, stone wedges 136 and 137 (each broken into two parts) were found in cracks and contained in an assortment of rockfall debris and humus-rich soil quite typical of this site. One crack is parallel with the foliations, and one is transverse.  We don't know how much sediment has been removed and thrown away by the geologists. There is nothing exceptional about rockfall fragments being broken or splintered; that is what happens when rockfalls occur. 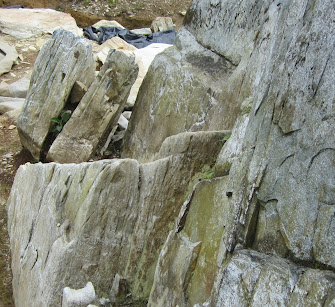 Top left in this photo taken during the dig:  the detached block, split in two, with the "stone wedges" visible.  It is NOT a bedrock outcrop. 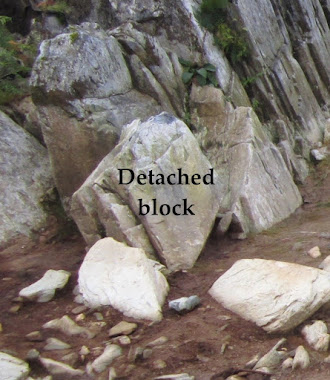 Another image of the detached block, with its bottom corner embedded in sediment.

2.  The "pillars" that were supposedly targetted by the quarrymen.

Actually one of them (adjacent to which wedges 134 and 135 and hammerstone 133 were found) is not a pillar at all, but a detached slab that has been split into two.  It is embedded in sediment, and probably fell off the crag many thousands of years ago.  The geologists involved in this article knew that this was a detached block rather than a bedrock outcrop, but they refer to it on p 4 as "a joint in the bedrock".  Then they refer to it as "a boulder."  Very confusing. There is no reason why it should have been considered a desirable piece of rock, since there are plenty of other smallish flat slabs littering the surface in the neighbourhood.  Its dimensions are about 1m x 1m x 30 cms -- of no value whatsoever if Neolithic quarrymen were looking for orthostats. 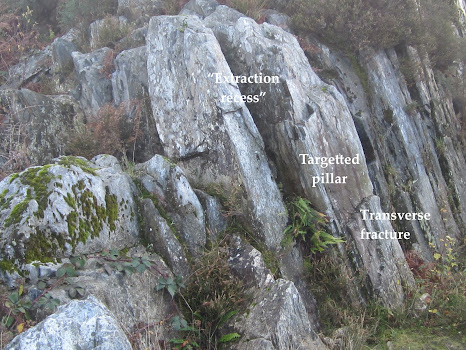 The massive "targetted pillar" -- estimated to have been at least 3m long and to have weighed close to 8 tonnes. If it had been levered away from the rock face, it would have broken into two.  The "extraction recess" is too shallow to have ever contained a bluestone pillar; but fracture scars show that a number of small blocks have broken away from here, probably in association with Quaternary erosional episodes. 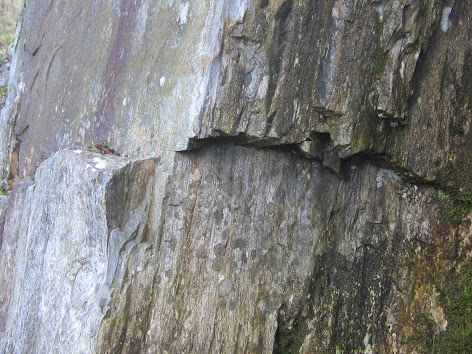 The transverse crack running across the massive pillar that the Neolithic quarrymen are assumed to have desired.  The pillar could never have been levered away from the rock face without
breaking into two.

The crack adjacent to what MPP has referred to in the past as "the monolith extraction" point is even more problematical.  In it, wedge 137 was found, suggesting to the authors of the paper that a large pillar was deemed suitable for levering away from the parent rock, supplemented by another wedge (136) in a deep crack on the top of the ridge, in a position suitable for levering the putative pillar away from the face. They suggest that a pillar 2.6m x 1m x 60cms was the "target" -- but that the quarrymen gave up maybe because they failed to "set it free."  This makes no sense either.  Having examined this block, I can say that it is almost as big as the 8 tonne "picnic table" which has attracted so much attention at Rhosyfelin.  That's far bigger than anything used in standing stone settings in West Wales -- except for some cromlech capstones that were used more or less where they were found.  That stone could never have been levered away from the face without first dislodging a smaller "pillar" to the north of it, at the point referred to by Parker Pearson as the "stone extraction recess."  (That recess is, in any case, a product of a fertile imagination, because it is only about 20 cms deep, and because there is evidence that  several distinct blocks (as distinct from an elongated pillar) have fallen away from it during a number of quite widely spaced episodes.  The fracture scars associated with these episodes can still be seen.)  And there is a compounding problem in that this massive block of stone has a transverse or crossing fracture about 1.8 m from its top, which means that it could never have been levered from the rock face intact;  it would have broken into two, again rendering it useless for any planned stone setting.

Even if the bits of stone so grandly referred to as "stone wedges" were indeed used as hypothesised by the authors of this article, they would have been completely useless as standing stones.

The whole idea of quarrying at this site is preposterous, and no matter how many "learned papers" the geologists produce in support of it, they still have not come up with any hard evidence that makes any sense.  All of the features at this site are natural, and I suspect that conclusion is not going to change.