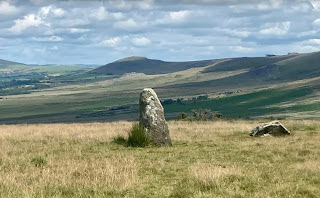 I've been saying it for five years or more, but now a senior archaeologist is saying it too, on the record:  the Waun Mawn "lost circle" promoted so heavily by MPP is simply not supported by the evidence.  In an article published in "Antiquity" journal Prof Tim Darvill effectively dismantles the hypothesis which has garnered vast media attention simply by pointing to the facts and separating them from the speculations.  It's all terribly polite, of course -- but make no bones about it -- this is pretty devastating stuff.
And since "Antiquity" is the journal that has invested so heavily in promoting the lost circle myth, losing a huge amount of credibility in the process, it's no surprise that they have given MPP and his colleagues the right to reply.  They do their best, as one would expect (since reputations are on the line here), but their response suffers from exactly the same fundamental deficiency as all the other papers they have written -- they cannot separate out facts from speculations, and cannot resist telling us what to believe instead of simply letting us see the evidence so as to draw our own conclusions.
Here are the two papers, which are open access:
Darvill, T. (2022). Mythical rings? Waun Mawn and Stonehenge Stage 1. Antiquity, 1-15. https://www.cambridge.org/core/journals/antiquity/article/mythical-rings-waun-mawn-and-stonehenge-stage-1/2F089B76AA2411BB09DBAFE79060101F
Parker Pearson, M., Pollard, J., Richards, C., Welham, K., Kinnaird, T., Srivastava, A., . . . Edinborough, K. (2022). How Waun Mawn stone circle was designed and built, and when the Bluestones arrived at Stonehenge: A response to Darvill. Antiquity, 1-8.
https://www.cambridge.org/core/journals/antiquity/article/how-waun-mawn-stone-circle-was-designed-and-built-and-when-the-bluestones-arrived-at-stonehenge-a-response-to-darvill/5678888DF6FEE308A55BA0AA5BB41CF2#.Y2U-QMHffKg.twitter
I'll do a more detailed analysis of the two papers in due course, but initially I would say that Darvill's paper is cautious and somewhat understated, whereas the paper by MPP and 14 of his colleagues makes me think of a group of drowning mariners desperately clutching at straws.
It'g good to see that Tim Darvill cites my paper called "Waun Mawn and the search for “proto-Stonehenge” (Greencroft Working Papers 4).   I'm grateful to him for taking it seriously, and for citing some of the evidence it contains.  (In contrast, MPP and his merry gang steadfastly refuse to cite anything inconvenient relating to Waun Mawn or any of the other sites they have built into their ever more imaginative narrative.)
https://www.researchgate.net/publication/345177590_Waun_Mawn_and_the_search_for_Proto-_Stonehenge
This  may only be a Researchgate working paper, but it has been looked at by 5,669 researchers, so it clearly serves some useful purpose.
Tim still cannot bring himself to accept that the bluestones at Stonehenge were probably carried by ice, referring to them instead as "imported from west Wales."  I'll forgive him for that.  One thing at a time, and the dismantling of the "lost circle" myth is enough to be going on with.......
Posted by BRIAN JOHN at 10:45

It may have just been " One Small Step" for That Man Tim Darvill to take, in citing Brian's Paper called Waun Mawn and the search for " proto - Stonehenge " ( Greencroft Working Papers:4).....but it was One Giant Leap on behalf of Senior Stonehenge Archaeologists' Commonsense!!!!