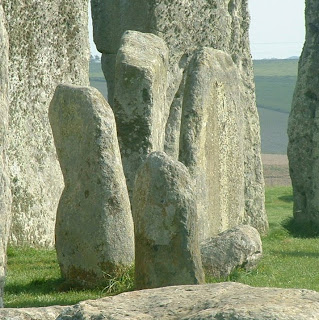 Some time ago I was in correspondence with Geoff Kellaway, the first man to bravely stick his head above the parapet on the glacial transport theory for the bluestones.

He sent a paper in which he argues that the bluestones were never described as BLUE stones by the early visitors to Stonehenge, but that in the Middle Ages (ie around the time of Geoffrey of Monmouth and later) they might have been referred to in Ango-Saxon as BLAU stones — with the word “blau” meaning striking, different, or of unusual or striking appearance. This is interesting — I hadn’t come across this idea before!! Is anybody else familiar with it?

Of course, this would make sense, since the stones are not actually blue at all — they are not that different in colour from the sarsens. But it’s intriguing to think that from an early stage people might have recognized them as simply DIFFERENT.
Posted by BRIAN JOHN at 22:16 No comments: