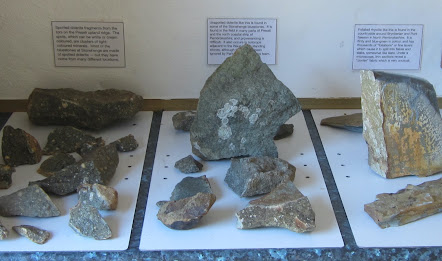 It's been quite an education, welcoming people to my little Bluestone Museum and talking to them about what they believe and do not believe.  One of the most striking things about the conversations is the number of people who have at some stage studied archaeology (including professional archaeologists) and who are seriously worried about the myth-making activities of certain senior professors.  They cheer me on and say "Thank God somebody is highlighting some of our concerns."  Then there is another group -- far larger -- of people who know nothing about archaeology or geomorphology and whose beliefs are based upon banner headlines in the press and on TV programmes introduced by our old friend Alice Roberts, among others. They are not stupid, and I prefer to think of them as intelligent people who are misinformed!   Day after day I get statements like these:

"The geologists know exactly where all the bluestones at Stonehenge have come from."

"It's scientifically proved that there were bluestone quarries at Rhosyfelin and Carn Goedog."

"They now know exactly which route was followed by the people who moved the bluestones."

"They have found the precise places from which bluestone pillars were extracted in the quarries."

"At Waun Mawn they have found the exact sockets in which the Stonehenge bluestones once stood."

It's all nonsense, of course, but I have been surprised by just how influential that appalling programme involving Alice Roberts and MPP in the rain has been;  it has been shown at least four times over the past 18 months, and those who know nothing about Stonehenge or archaeology think it's just wonderful!  That probably makes Mike and Alice, and the BBC and English Heritage, very happy indeed.

But there is a darker side to all of this.  Occasionally, and against my better judgment, I dip into discussions on Twitter or Facebook about bluestones and the prehistoric archaeology of West Wales, and when I seek to correct some of the misunderstandings some people are instantly enraged.  Myths have turned into articles of faith, and they are accepted and followed with quasi-religious fervour by many thousands of people.  As Magister Kurdling said to pupil Molesworth back in the 1500's:  "Boy, take six of the best!  How dare you seek to destroy the ignorance of a lifetime?"

Some people are so furious with me that they become very aggressive, and one or two "discussions" are turned very nasty by torrents of personal abuse pouring in my direction.

So we come to the cause of all this aggravation -- the promotion of rather wild fantasies and the creation of myths by archaeologists and geologists who should know better. They get cheap publicity and even something we might call "fame" because of the manner in which their ideas are promoted via press releases and the media and in TV documentaries promoting fantasies dressed up as the established truth.

Every now and again we see articles in the literature about "responsible archaeology", and indeed archaeologists are much more sensitive than they used to be about local cultures, languages and beliefs -- and about the ownership of artifacts.  That is something to be applauded.  But there is much less emphasis on the need for archaeologists to be careful and truthful, and to promote only those hypotheses that are well supported by field evidence.  And hardly anybody talks about the need for academic restraint.  When that restraint is abandoned, evidence is not properly scrutinized and "impact" becomes the only thing that matters.  Both the media and the public are enticed away on a wild goose chase into territory that becomes more and more bizarre.

If there is one thing that upsets me it is the willingness of certain well-known archaeologists to announce earth-shattering finds (linked to Stonehenge, of course) based on the flimsiest of evidence, and to then spend years searching for, and even creating, confirmatory "evidence".  Certain journals are complicit in this, publishing articles that should never have seen the light of day.  And I am upset too by the manner in which inconvenient evidence relating to geology, landforms and sediments is simply ignored on the basis that the glacial hypothesis is "dead in the water."  MPP and his team of maybe twenty researchers refuse even to admit that any of their ideas are disputed in the literature; that is not just bad manners, but a clear sign of academic malpractice.

When are archaeologists going to take this issue seriously and call out those responsible for this descent into the gutter?  To continue with the metaphors, most academics appear to be scared to death of making ripples on the water or poking their heads above the parapet.  But Gordon Barclay and Kenny Brophy have made a start by flagging up the "interpretative inflation" that goes with the aggrandization of Stonehenge, and to their credit they do not seem to be deterred by the vicious personal attacks that have been aimed at them by certain very angry individuals.

If archaeology is on the way out as a university discipline, it has only itself to blame. 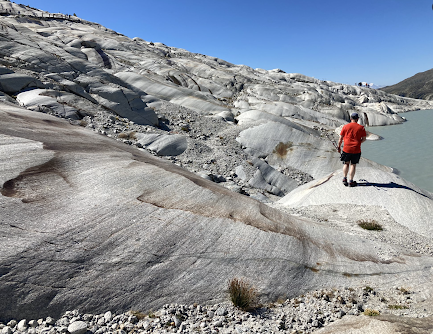 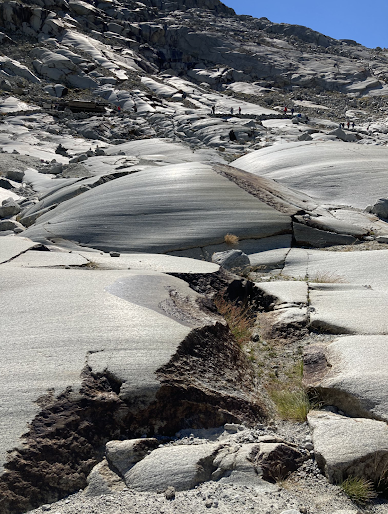 Prof Simon Cook publishes some superb images on his Twitter page.  Here are two stunning images of polished and striated bedrock close to the Rhone Gletscher in Switzerland.  Classic small whaleback forms, with roches moutonnee fracturing on the down-glacier flanks of some of them.
Posted by BRIAN JOHN at 10:25 2 comments: 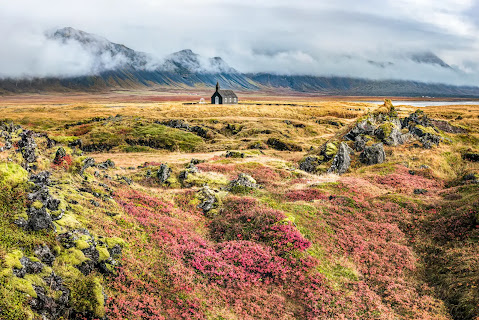 I couldn't resist posting this image of a small church lost in the vastness of one of the huge glacier outlet troughs of Vestfirdir -- the NW fjords of Iceland.  That low cloud base hovering halfway up the trough side is absolutely typical -- brings back happy memories of the field seasons spent up there in days of yore........
Posted by BRIAN JOHN at 23:11 No comments:

How to build a cromlech 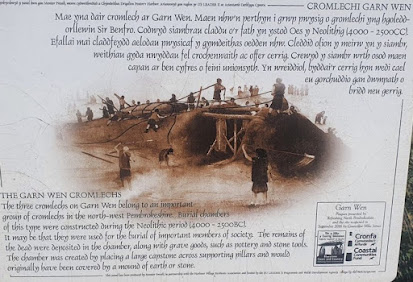 This is a nice illustration from the information panel at the Garn Wen "cemetery" near Fishguard, showing how the capstones of the local burial chambers were put in place.  Seems perfectly reasonable to me -- but while a mound of this size was probably needed at Pentre Ifan and some of the other rather spectacular megalithic structures, the Garn Wen cromlechs are so small and crude that hardly any mounds at all would have been needed in order to slide the capstones into position.  Maybe they were just lifted and then moved sideways with levers and packing stones? 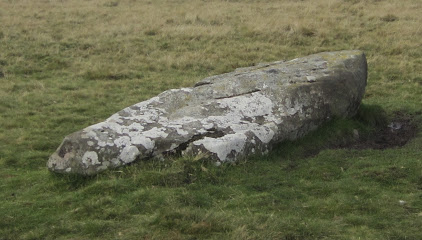 The commentary on the original "Lost Circle" article in Antiquity (Feb 2021) has been overtaken by events, and so I have provided an update based on the Interim Report for the 2021 dig and on the two geological articles recently published.

It can be accessed on Researchgate -- no paywalls or other access issues, and it should be possible for everybody to read it and send me comments if they like.

I am becoming increasingly disenchanted with certain peer-reviewed journals like Antiquity which seem to apply less and less scrutiny to articles that are submitted, and which allow into print material which is so unscientific that it should never have seen the light of day.  Journal editors can of course choose "friendly" referees if they really do want to publish a particular article,  and it's common practice nowadays to allow the authors of papers to suggest the names of experts who can be reliably expected to go easy on the critical comments and suggest acceptance and publication.  Nice and cosy.  I can understand why authors do not want their papers to be refereed by people who are blatantly hostile to their hypotheses, but sometimes the quality of refereeing is pretty appalling.  And I'm not the only person saying that.......

How to move a bluestone 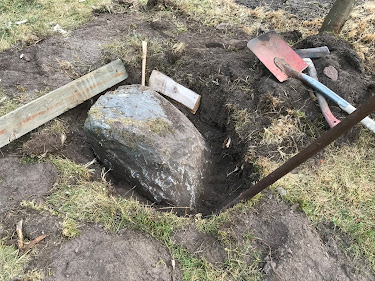 What do I do when I am in Sweden?  Well, for some of the time I move boulders which are in inconvenient positions.  This one was a danger to traffic, on a turning circle where it could have damaged tyres and wheels. So it had to go.  It wasn't actually bluestone -- it was a typical bluish schist as found all over the Stockholm Archipelago.  I reckon it weighed about 800 kg.  I have moved bigger ones in my time, but this was quite enough effort for an old codger like me........  Seriously hard work.
What you need is a spade, a strong crow-bar so thick that it will not bend (this is your lever), and loads of smaller stones and bits of wood which will be used as packing materials as the stone rises, bit by bit, very slowly, from its original embedded position until it can be rolled away from the hole.  You have to lever the stone up from all sides, sometimes just a few cm at a time, to get it out of the hole. 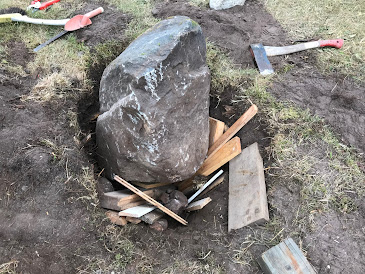 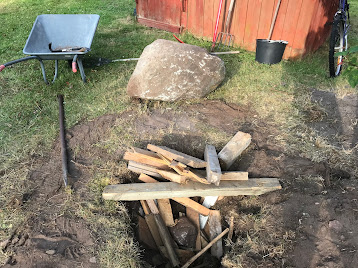 I hate to think how difficult an operation like this must have been before the invention of iron bars and metal spades.  A standing stone 2m high would have involved a much deeper pit than this, and I imagine that the "backfill" would have consisted mostly of smaller boulders back in the Neolithic, or bits of wood that have since rotted away, or a mixture of both.
With regard to the supposed sockets at Waun Mawn (at least eight of them, according to MPP), I did not see anything to convince me that any of the slight depressions ever did hold a standing stone.  Mike Pitts was quite right to question the "lost circle" research as being fundamentally flawed on this basis alone.
The only positive thing I can say about these hollows is that some of them might have held embedded erratic boulders which were taken away to be used somewhere else. 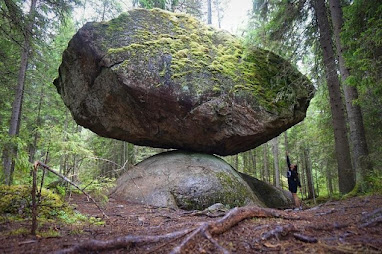