Apparently the Stonehenge bluestones have been reassessed, and have been found to weigh 40 tonnes each -- ie far more than the sarsens.  Or maybe it's just a misprint.  Or maybe it's not.  Anyway, it's amazing what people will do to drum up a bit more business....

Feel like a day trip from Bath on a Razorcat?  It's a sort of three-wheeled motor bike in which two passengers sit behind the driver. Apparently, in exchange for £260, the driver will take you from Bath on a nice day trip to Stonehenge, although I doubt you'll get the chance of roaring round half a dozen circuits of the ancient monument on the Razorcat........

Visit Britain's most iconic site on a Razorcat trike...
Leave your daily routine behind and take a thrilling ride on board our exciting three-wheeler. Feel the exhilaration of the wind in your face and enjoy the freedom that only a Razorcat trike ride can give you.
Not only will you have a fantastic ride on our Razorcat trike but you will also experience the famous World Heritage site that has just got to be seen. On a spiritual level, it attracts people from all over the world. From an engineering point of view, it will astound you when you realise it was built over 3500 years ago and some of the stones weigh more than 40 tons – and came from Wales.

When you take a ride on a Razorcat trike, YOU become the centre of attention.

"The stones of Stonehenge were placed in such a way that they increase in size towards the centre and alternate in shape between tall, thin pillar-like stones and stones of a tapering obelisk shape.  Two types of stone were used for the construction of Stonehenge - the 'bluestones' which weighed almost forty tons and were brought from 240 miles away, and the 'Sarsen' stones which had a height of about eighteen feet and weighed twenty-five tons."
Posted by BRIAN JOHN at 09:03 1 comment: 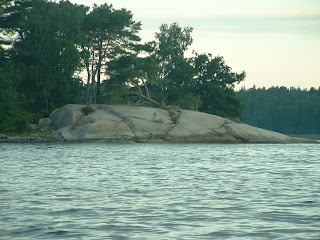 Still in the Stockholm Archipelago, I did a long paddle in the kayak today (25 kms) around the whole of the island of Blido, and was reminded yet again just how many ice streamlined forms there are.  There must be thousands of roche moutonnees in the whole archipelago, of many sizes from miniature to much larger than the one shown here.  Not much doubt about the ice direction here -- it was streaming pretty well exactly from the north towards the south, as shown by gouges,  striations, whalebacks and those ubiquitous roche moutonnee forms......

Sorry about the dim light -- I passed this particular feature at 5.30 in the morning!
Posted by BRIAN JOHN at 18:23 2 comments:

I'll be doing a talk for holidaymakers in Newport on 18th August --  hope for a good turnout!  here is the info from the town web site: 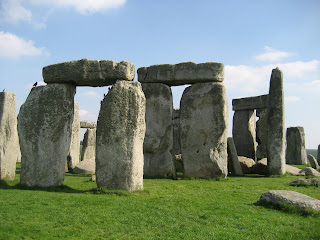 Join us for a fascinating illustrated talk from novelist and local historian Brian John, writer of the "Angel Mountain" saga, on Thursday 18th August at 7.30pm.

Brian will delve into the past and bring to light some of the amazing recent discoveries relating to the Stonehenge bluestones, many of which are from North Pembrokeshire.  He will challenge some of the established theories about Stonehenge, and will put forward a new theory of his own which is in tune with what we now know about the Ice Age in Britain.  With refreshments available, this will be a stimulating and informative event, suitable for all ages.
Posted by BRIAN JOHN at 20:01 3 comments: 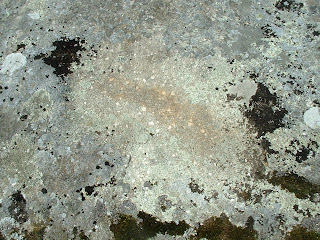 What's this?  A picture of an exploding galaxy a thousand light years away, taken by the Hubble telescope?  No, it's a close-up of the surface of an exposure of spotted dolerite at Carn Meini.  If you look closely at the rock surface you will see that there are at least four different surface textures.  In the centre of a slight hollow there is an iron-stained area, then outside that an area where the rock looks remarkably fresh and clean, then outside that a darker coloured weathered surface, and then finally patches of lichen-covered rock.  How do you sample for cosmogenic dating on rock surfaces such as this?  I was chatting to my old friend David Sugden about this a couple of weeks ago, and he confirmed how difficult it is to get reliable dates, given the huge variations in cosmic ray bombardment even within small areas such as this.  Standing water, temporary lichen growths, intermittent snow banks, intermittent peat or grass cover, spreading heather and gorse -- they can all protect a rock surface for decades, centuries or millennia from cosmic rays.  No wonder that the cosmogenic dates obtained by Danny McCarroll and colleagues for North Pembs seem to make no sense at all.......
Posted by BRIAN JOHN at 21:50 4 comments: 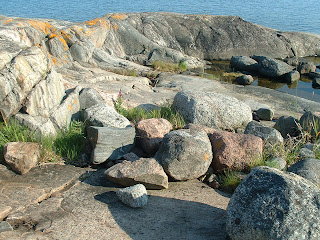 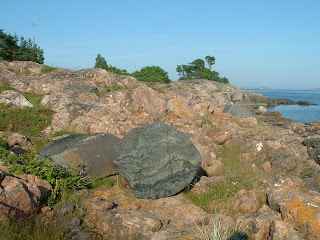 More pictures from the Stockholm Archipelago -- these glacial erratics are sitting on "washed" surfaces of Precambrian Shield rocks, which have been eroded by aerial scouring and which have emerged from the sea in the last few centuries as a result of isostatic recovery.  The erratics are very spectacular.  In the top photo we see a jumble of erratics of various types -- there are at least five different rock types represented, each one different from the pinkish granite bedrock.  I estimate that they are up to 3 tonnes in weight.   In the bottom photo the boulders are even more obviously erratic -- grey banded schists sitting on a bright red granite bedrock.  Goodness knows how far these erratics have travelled -- maybe hundreds of kilometres, and maybe from just over the brow of the hill to the north.....

Click to enlarge the photos -- you should be able to see great detail.
Posted by BRIAN JOHN at 21:36 No comments:

I have just made a new visit to the outer islands of the Stockholm Archipelago in Sweden, where many detailed observations were made more than 40 years ago prior to the publication of the text called Glaciers and Landscape.  Once again, I have been mightily impressed by the vast range of glacial erosional features in an area that lay right at the heart of the Scandinavian ice sheet every time it expanded and moved southwards towards Denmark, Germany, Poland and the other southern Baltic lands. 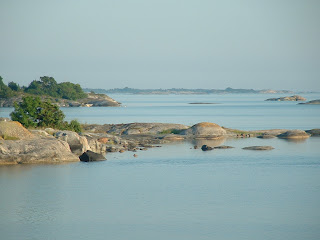 The archipelago is basically an area of ancient shield rocks including granites and gneisses and metamorphosed rocks that were originally shales, sandstones, greywackes, lavas and ashes -- over 3,000 milliion years ago.  The complexity of these rocks is striking, and many of them have had such complicated histories of deformation and alteration that they are difficult to classify.  At any rate, they are extremely beautiful, with colours ranging from grey and blue to green, black and brown, with some rocks bright red or in shades of pink.  Some rocks, predominantly made of quartz fragments, are white or buff-coloured.  There has been such a long history of erosion here that the landscape is essentially one of gently undulating plateau surfaces not much above present sea-level, with deep "tunnel valleys" incised into these surfaces and coinciding for the most part with faults or other lines of weakness.

There is an incredible micro-morphology of glacial erosional features which can be seen around the coasts on thousands of small islands to the north and south of Stockholm.  Most of these features date from the Devensian glacial episode, and they are remarkably fresh.  They are easy to examine because the whole of this area was deeply depressed isostatically by the weight of overlying glacier ice, and was submerged to a depth of about 150m following ice wastage.  Since that time (about 9,000 years ago) the land has been rising as a result of isostatic recovery, which has gradually slowed to the current rate of about 5 mm per year.  The islands are still "growing" -- at a rate which humans can appreciate over the span of a single lifetime.  On the higher parts of the islands vegetation has had time to establish itself and to create thin soils, but in many coastal areas virtually all soft sediments from till, lake and sea floor deposits have been washed away during the process of emergence from the sea, leaving behind clean rock surfaces with occasional erratic boulders and raised beaches of cobbles and rounded boulders.  The ice here has moved from the north towards the south, with minor deviations which can usually be attributed to the "control" exerted by the shape of the rock surface.  On the clean rock surfaces one finds wonderful examples of virtually every kind of glacial erosional feature:  roches moutonnees (large and small), striations and gouged grooves, chatter-marks, crescentic cracks and gouges with the ends sometimes pointing up-glacier and sometimes down-glacier, and sinuous P-forms which appear to have been caused by water at the base of the glacier or by heavily saturated sediments moving under pressure like toothpaste being squeezed out of a tube.

Below are some of my recent photos, which can be looked at in conjunction with my posts on glacial erosion and entrainment. The photos are all from Rodloga Storskar, in the outer part of the Stockholm Archipelago.