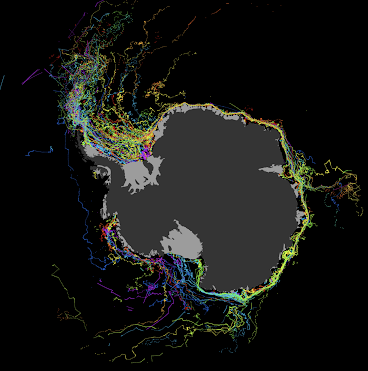 This is one of the new maps featured in "The Antarctic Atlas".  It shows plotted  iceberg tracks over a number of years, with each year shown in a different colour.  Several things are striking.
The first is the way in which the bulk of icebergs coming from the ice fronts around the coasts of the east Antarctic ice sheet hug the coast, in spite of the very cold katabatic winds that scream dow from the ice sheet interior which might be expected to carry them far out to sea.  So they are pushed up tight against the coast by ocean currents. The bulk of them are moving anti-clockwise, carried by the Antarctic Coastal Current (ACC). That's in the opposite direction to what we used to think 50 years ago....
The second feature is the extraordinary concentration of bergs in the Weddell Sea, also moving on a broad anti-clockwise spiral.  Many of the big bergs that reach the Weddell Sea are carried on the "conveyor belt" of the ACC, but vast numbers also come from the edges of the Filchner and Ronne Ice Shelves, carrying ice from the West Antarctic Ice Sheet at a rate of c1 km per year.  This is labelled "Iceberg Alley", and it is not surprising that Shackleton and the "Endurance" fell foul of the chaotic and ever changing sea ice enironment in the Weddell Sea during the famous 1915 expedition.
Many of the bergs are carried northwards towards the South Orkney Islands and then South Georgia, but most of them break up and melt away as they encounter warmer and very stormy seas of the middle latitudes.
The Ross Sea is another area of iceberg concentration, again fed by the glaciers and shelves of the West Antarctic Ice Sheet being carries counter-clockwise.  But the Ross Sea is not so tightly enclosed as the Weddell Sea, abd so there are more frequent iceberg breakouts,  with a wide variety of tracks followed, partly influenced by shifting wind patterns.
The Amery Ice Shelf and the Lambert Glacier are feeding so much ice out the the East Antarctic coast that many icebergs break through the ACC and waste away many hundreds of kilometres offshore. 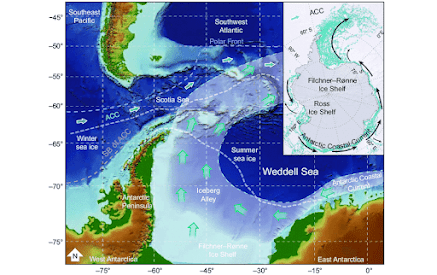