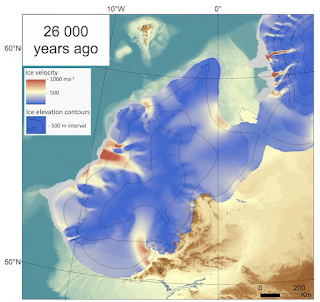 The BRITICE-CHRONO team has published a new animation, based on the "time slices" published in its recent big paper.  This is not the first animation to have been done, but the timing information is -- as one would expect -- more accurate, and there has been much greater "ground truthing" or matching with field evidence here, as compared with earlier models.

It's an impressive piece of work, and the team deserves congratulations.  There are of course many talking points, and we have to remember that models are simply tools for finding out the truth -- models do not really represent the truth, although they may approach the truth as time passes and as they get more and more sophisticated.

One issue is the representation of the Celtic Sea ice edge at around 50 deg N, just touching the N edge of the Isles of Scilly.  We know that the ice edge was further south than that, and the evidence points to the archipelago being a nunatak at the time of the LGM.  Also, the BRITICE-CHRONO team has itself suggested on the basis of rather convincing evidence that the ice edge was positioned out at the shelf edge, 200 km further south.  The grounded ice - floating ice debate comes into the frame here, as does the impact of isostatic depression on the sea bed, and the global position of sea-level; watch this space....

Another issue is the representation of the "ice free corridor" covering much of central and south Pembrokeshire -- based, I suspect, on the out-dated belief that the landscape in this area has surface deposits belonging to the "Penfro Till Formation" but nothing younger.  I have done earlier posts on this and on the strange acceptance of this formation in the stratigraphic lexicon.  Sadly, the BRITICE team does not seem to have done any fieldwork in Pembrokeshire.  But something else should have set the alarm bells ringing.  In order to make the model obey the laws of ice physics, the team has reconstructed an ice surface elevation at 1000m across north Pembrokeshire.  The summit of Preseli is at 536m -- and that means that the whole of Preseli must have been buried beneath c 500m of glacier ice.  I don't like using the word "impossible" but let's use it here -- it would have been impossible, at the time of the LGM, for central and south Pembrokeshire not to have been glaciated by ice travelling broadly towards the S or SE.  I have speculated on the ice cover in the past, and on the meaning of the Preseli trim-lines -- and I am more and more convinced that these features mark a transition from cold-based to warm-based ice. 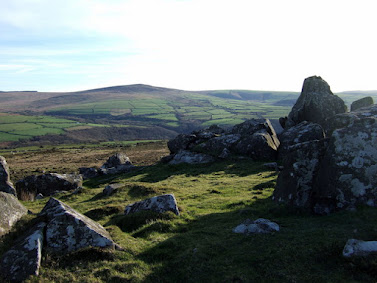 Mynydd Preseli -- under 500m of glacier ice at the time of the LGM?

One other feature of the time slice for 26,000 years ago is the pink-coloured high velocity ice stream flowing NW to SE from St George's Channel into Carmarthen Bay and the Bristol Channel. Ice is portrayed as flowing at up to c 1 km per year.  I don't necessarily have a problem with that, but there is no obvious topographic explanation for that accelerated rate of flow, and I wonder whether it is a modelling artifice, built in to ensure rapid ice evacuation so as to accommodate the ice-free corridor!  In the text of the article, Chris Clark and his colleagues admitted that the said corridor was causing them some modelling problems.  I'd like to get further details on this.

All very interesting, for those of us who enjoy dabbling in glaciology.