The bluestone edifice comes crashing down 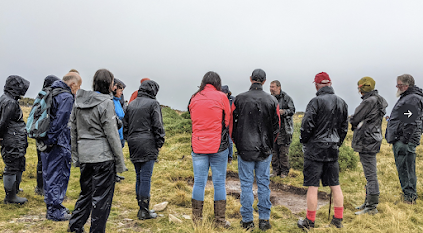 A gathering of the faithful in the pouring rain at Waun Mawn, assisted in their search for
enlightenment by the High Priest.
We know that people are, by and large, rather gullible, and that they tend to think that everything that appears on the telly (in documentary programmes, at least) is well researched and therefore true.  People also tend to defer to learned professors, on the basis that they probably know what they are talking about.  They like things to be simple, and unencumbered by boring stuff labelled as "evidence".  They also like a good story, especially if it involves heroic ancestors who were in possession of some lost wisdom and who were probably more clever than we might think.  They tend to be attracted by things that reinforce their sense of belonging to a tribal group, or a community, or a nation.  And finally they like to have something to believe in, since religion has become somewhat old-fashioned.

OK -- that's all a bit of a caricature, but as with all caricatures there is more than a grain of truth in there.

Against this background the extraordinary myth of the Stonehenge bluestones has been developed and enthusiastically (some might say cynically) promoted by a small group of 15 or so academics, some of whom are scientists but most of whom are professional archaeologists. They all have careers to develop and reputations to protect. So the more TV air time, column inches and headlines they can garner, the better. Until, that is, they are rumbled.

The myth -- involving ancestor worship, political unification, bluestone quarries, lost circles and stone haulage -- is so well known that we don't need to repeat it here.  It has been a hugely successful myth, to the extent that it has thousands of adherents who assume that it is true and who promote its merits endlessly on social media and in the printed media.  Just go to Twitter and do a search for "Waun Mawn" and you will see that I mean.

The myth is based entirely on one assumption -- that the Pembrokeshire bluestones could not possibly have been carried from west to east by glacier ice, and that there must have been an elaborate human story explaining their presence at Stonehenge.

One of the reasons for the success or popularity of the myth is that the crucial archaeological digs at Rhosyfelin, Carn Goedog and Waun Mawn are in very remote locations, impossible for most people to visit.  So members of the public tend just to believe what they are told about them. Second, archaeological digs have the great benefit (for the archaeologists concerned) that they are open for a short time and then filled in, creating a situation in which the diggers can simply tell people what they have found and how things should be interpreted.  Proper scrutiny is headed off, except for whose who take the trouble to make a long trek to the far west, or who happen to live nearby.  There are three crucial papers relating to the three sites -- all in the journal "Antiquity" and all so appalling that they should never have been published -- but hardly anybody in academic archaeology has questioned them or criticised them on the record.  Why?  I think we know the answer to that..... 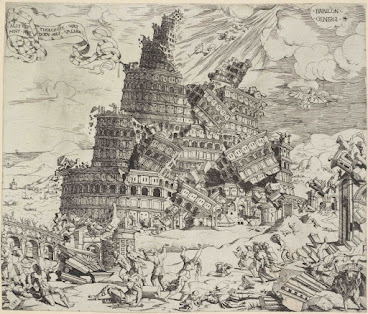 But in spite of all the factors which favour its survival, the bluestone myth is crashing down, much to the consternation of those who have invested time and energy to its construction.  Let's just concentrate for a moment on the peer-reviewed literature which has undermined the foundations.

1.  There are two 2015 peer-reviewed papers which question the research findings of MPP and his team at Craig Rhosyfelin and which argue that the features attributed to "quarrying" are all natural, explainable by reference to natural processes.  The response of the MPP team?  Over 7 years the two "inconvenient" papers have not been acknowledged or cited once.

2.  The obsession (in the UK archaeological establishment) with Stonehenge as the centre of the Neolithic / Bronze Age universe has been heavily attacked by Gordon Barclay and Kenny Brophy in a very influential paper published in the Archaeological Journal.

They tackle the Stonehenge bias in prehistory as being led by a weird obsession with pseudo-political matters including unification, cooperation and tribute payments -- leading to claims about sites many miles from Stonehenge being created as part of a great "empire" centred on Salisbury Plain.  Parker Pearson writes about "the unification of ancestral identities", whatever that is supposed to mean.  The bias, say B&B, leads over and again to "over-interpretation" and to claims of Stonehenge links and influences where none have in fact been adequately demonstrated.

3.  The claims about the isotope analyses of teeth and bones in Stonehenge burials and other organic deposits have also been called into question.  Barclay and Brophy claimed that so-called links between West Wales and Scotland (for example), based on oxygen and strontium isotope analyses, were no better than imaginary -- based on sampling bias and on the over-interpretation of data that simply showed links with areas of ancient rocks.  They accused Madgwick, Evans, Parker Pearson and others of twisting research data to reinforce pre-existing notions about the relations between centre and periphery.  I agreed with what B&B had to say, and indeed within the past couple of years two other papers have appeared which have shown that the isotope analytical techniques used are not reliable.  One (in 2019) showed how the use of agricultural lime can strongly influence natural strontium isotope variations; and the other (in 2022) suggested that the values assumed to show a link between Stonehenge and West Wales (for example) were not unique, and could have been found in samples originating not very far distant from Stonehenge.

4.  The two geology papers published in June 2022 designed to demonstrate some sort of a link between Waun Mawn and the so-called "bluestone quarries", and between Stonehenge and Waun Mawn, have provided instead strong evidence of no links whatsoever.  Effectively these papers (both involving Ixer and Bevins) have falsified the Waun Mawn hypothesis.

5.  The idea of a "special" sacred landscape in the Waun Mawn area,  with a giant stone circle as a key component of a great ceremonial complex, is a critical component in the story developed by Parker Pearson.  He argues that this ceremonial landscape explains why there was a special link with Stonehenge which provided the motivation for the dismantling and removal of the famous lost stone circle. However, in the latest publications concerning prehistoric Pembrokeshire, by Elizabeth Walker and Tim Darvill in the Historical Atlas of Pembrokeshire (2019),  no special or dense ceremonial complex is identified in the Waun Mawn area, and cultural markers suggest links with Ireland and other parts of Wales rather than with Salisbury Plain.

6.  Finally Tim Darvill  has now cast doubt on the "evidence" collected in the Waun Mawn digs, and has concluded that it is so insecure that it cannot be used to support any ideas about links between the site and Stonehenge.  He agrees that no link has been demonstrated between Waun Mawn and the hypothetical bluestone quarries.  He agrees with me that the investigations of local geology at Waun Mawn are biased and manipulated in order to support the ruling hypothesis.   He also questions the radiocarbon and OSL evidence from Waun Mawn, and argues that the selective use of "convenient" dates and the rejection of dates that do not fit the desired timeline is not good practice.

All in all, what we now see is an uncoordinated assault on many aspects of the Waun Mawn narrative in the peer-reviewed literature, by a wide variety of researchers working in different fields --  quite independently of me and my blog.  The grandiose edifice is crashing down, as it was bound to do because there is simply not enough evidence to support it and because it has been held up by nothing more solid than sticking tape and flimsy speculations and assertions.