Pembrokeshire: where are the ancient deposits? 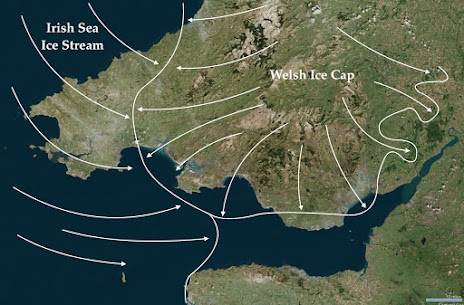 If the whole of Pembrokeshire was overridden by Devensian ice, and if all of the surface glacial and glaciofluvial deposits are around 20,000 years old, where are the traces of ancient tills which might be matched with those of Eastern England?

Well, they sure as eggs are not to be found either at West Angle or al Llandre, and I have already written to the BGS to say that the Penfro Till formation is a figment of somebody's imagination and should be dumped or at the best least redefined with new type localities.

But there ARE deposits which appear to be very old, at two locations:  Black Mixen near Lydstep on the south coast, and Ceibwr near Moylgrove on the north coast.

Both of these sites are described in detail on this blog:

https://brian-mountainman.blogspot.com/2019/01/ceibwr-quaternary-stratigraphy-and_9.html
https://brian-mountainman.blogspot.com/2018/11/ceibwr-and-witches-cauldron.html
The heavily cemented tills and associated deposits at Ceibwr and Black Mixen are the only serious candidates which might be of Anglian age.  There will certainly be other exposures waiting to be discovered......