Mountain summits with blockfields were not necessarily nunataks 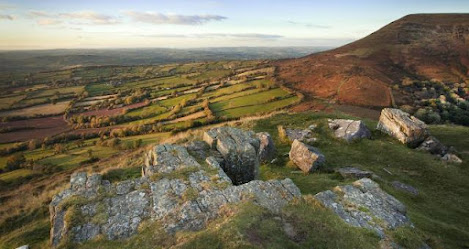 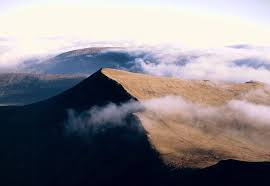 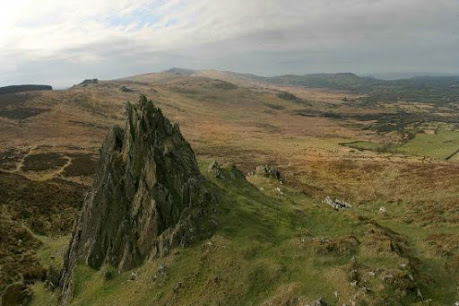 Top two photos: Brecon Beacons.  Lower photo:  Foel Drigarn and the upland ridge of Mynydd Preseli. During the LGM did these uplands support extensive icefields of thin cold-based ice which acted in a protective capacity?
For many years it has been assumed that felsenmeer (or blockfields of shattered rock) on mountain summits in glaciated areas were probably nunataks in the last glacial episode.  The line of reasoning has always been that if glaciated rock slabs, erratics and till are concentrated on the lower mountain slopes, then those are reliable signs of glaciation -- usually running up to a discernible "trim line".  Above the trimline, the reasoning is that periglacial conditions must have existed, with ongoing rock shattering, solifluction and ground ice processes operating over much longer periods of time than beneath the trim line.  That all sounded logical enough -- although in North Wales and other areas the nunatak debate has been quite an active one, with some experts believing that the ice of the Welsh ice cap MUST have covered all of the summits during the LGM, if the ice had been obedient enough to obey the laws of physics.
Well, this 2004 article is very interesting, since it shows (quite convincingly, I think) that trimlines on mountain sides may simply show the positions at which the thermal conditions of the ice mass changed from cold or polar ice at higher altitudes (related in part to limited ice thickness and limited movement or activity) to warm-based ice lower down, with enhanced ice flow, landscape modification, erratic entrainment, and till deposition.
This does not show that there were no nunataks -- and clearly they must have existed at various stages of the glacial cycle -- but it does show that the presence of blockfields and the lack of a till cover cannot be used as reliable indicators of ice-free status.
As I have suggested at various times, the summits of the uplands of mid Wales, the Brecon Beacons, the Black Mountains and Mynydd Preseli may have supported local ice caps which were quite thin, where the ice acted in a protective capacity while erosion was concentrated along flowlines within the main valleys and landscape depressions.  This of course  conforms with glaciological theory, and it is built into all of the modelling work done by Henry Patton, Alun Hubbard and others over the last 20 years.
Here is the article:

Felsenmeer persistence under non-erosive ice in the Torngat and Kaumajet mountains, Quebec and Labrador, as determined by soil weathering and cosmogenic nuclide exposure dating

Can. J. Earth Sci. 41: 19–38 (2004) doi: 10.1139/E03-072
https://www.academia.edu/2566564/Felsenmeer_persistence_under_non_erosive_ice_in_the_Torngat_and_Kaumajet_mountains_Quebec_and_Labrador_as_determined_by_soil_weathering_and_cosmogenic_nuclide_exposure_dating?email_work_card=view-paper
Abstract:
Soil analyses and terrestrial cosmogenic nuclide exposure dating are combined and a conceptual model proposed to explain altitudinal weathering contrasts in high-latitude highlands. We show that summits in the Torngat and Kaumajet mountains were covered by ice during the Last Glacial Maximum, and that their felsenmeer cover probably survived multiple glaciation events. For similar lithologies, soils on felsenmeer covered summits are signigicantly more weathered than those below the felsenmeer limit, displaying higher concentrations of crystalline iron, amorphous aluminium, and silicium extracted with oxalate. Secondary minerals such as gibbsite and kaolinite occur in felsenmeer soils, whereas those formed in till lacked these secondary minerals. 10Be and 26Al exposure ages for nine of ten samples, from high-elevation tors and autochthonous felsenmeer blocks, range from 73 ± 6 to 157 ± 15 ka. By contrast, ages of 11.4 ± 1.0 and 11.7 ± 1.0 ka are measured for bedrock in the much lower Saglek zone, indicating extensive (>3 m) glacial erosion of this zone during Late Wisconsinan glaciation. 26Al/10Be ratios demonstrate that exposure of the high-elevation surfaces was interrupted during at least one cosmic ray shielding event by either ice or till cover. In either case, Late Wisconsinan glaciers could not have extensively eroded these surfaces. Five erratics dated above the Saglek zone, including one in the felsenmeer zone, have exposure ages ranging from 11.6 ± 1.0 to 13.6 ± 0.7 ka. This indicates that valley and high-elevation ice persisted through the Younger Dryas Chron and provides further evidence that the highlands were not nunataks during the Late Wisconsinan period.
Posted by BRIAN JOHN at 12:27