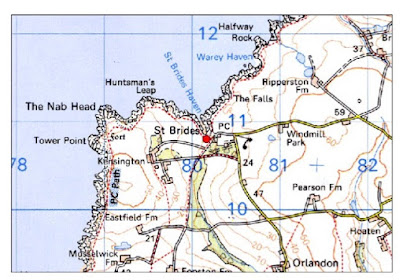 BRING UP THE BODIES
It's amazing that as far as I can see,  nobody has homed in on this little creek on the north side of the Dale Peninsula to check out the glacial and related deposits.  They are actually quite spectacular, and if anybody still has any doubts about Late Devensian ice getting this far south, please go and have a look.  The till exposures are fascinating, and easy to examine, and there are erratics of all sizes all over the beach, above and below HWM.

I went over there today specifically to take a look, since Devensian ice must have come in here directly from the N and NW -- and I assumed there would be things to see.  Sure enough, there were.......

The creek is best known for the stone-lined graves exposed in the sediments which line the clifftop, especially in the vicinity of the lime kiln in the centre of the bay.  Some of the graves may date from c 800 AD, and burials may have taken place here for at least 800 years. There was a big excavation programme here some years ago (2009-11), reported in this document: 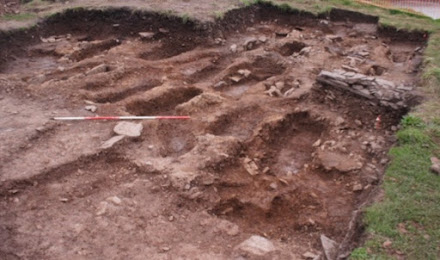 Some of the "cist graves" exposed during the cemetery dig. 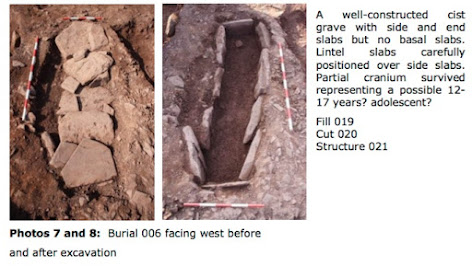 One of the excavated graves showing the lintel slabs on the left and the vertical side and end slabs on the right.  Remnants of similar graves can still be seen in the cliff face above the beach, in the vicinity of the lime kiln.

Over 35 graves were excavated. Most of the digging was conducted to the south of the church, but parts of the old graveyard did reach the present cliff-line, and there has been much ground disturbance as a result.  Further ground disturbance is associated with the building and operation of a rather spectacular lime kiln -- and there was also a chapel here, now lost without trace. (The current church is a later replacement.)  And for centuries this was a busy little port associated with the herring fishery -- that again will have involved some disturbance of surface sediments and the creation of drainage ditches, slipways, sea walls etc.

Quotes from the Report:

Two sources suggest the remains of the chapel were later used as, or perhaps demolished to construct a salting-house. Fenton’s early 19th century recordsuggests that that the chapel is no longer visible:

‘In the little creek which almost comes up to the churchyard wall there was in former days a great fishery of herrings; and close on the shore a little raised above the beach stood a small chapel, where the fishermen were used to put up their prayers for their success and averting the dangers of the sea, and round which they were buried, as to this day many stone coffins are seen peeping out of the crumbling earth, eaten away by the sea at high tides.’. (Fenton 1903 edn)

‘There is a tradition that out of the ruins of the chapel a salt-house for the convenience and use of the fishery was erected, and from that time the fishery failed, which occasioned the following distich:

‘When St Bride’s chapel a salt-house was made,
St Bride’s lost the herring trade’. (Fenton 1903 edn)

In 1833 Lewis appears to suggest that the remains of the chapel were still visible:

'.... at the neck of a small inlet from the bay, which flows up almost to the churchyard, forming what is now called St Bride’s Haven. A considerable herringfishery, which has been discontinued for many years, was formerly carried on here with very great advantage, and there are still remnants of an ancient chapel on the beach, which according to tradition, was subsequently appropriated as a salting-house for curing the fish. In the cemetery belonging to this chapel were numerous stone coffins, of which several have been washed away by the encroachment of the sea, which has here gained considerably on the shore, as was proved some years ago, during an extraordinary recess of the tide, by the discovery of several stumps of trees.’ (Lewis 1833)

These accounts have generally been understood to suggest that the chapel has long since been lost to erosion, but neither account definitively states that this is the case. It seems likely that various buildings and structures associated with the fishing industry, and later with the lime trade (a 'three-quarter circular' type limekiln with two rounded drawing arches is situated above the beach) wouldhave been present at St Bride’s Haven. These may have been built from, or incorporated the chapel walls, and it remains possible that the chapel location still survives somewhere behind the beach.
-------------------------------- 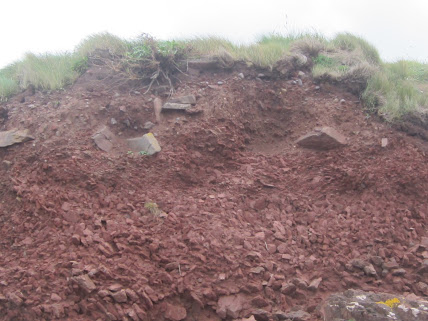 Traces of cist graves projecting from the cliff face near the lime kiln.  We can also see traces of the burial pits.
All that having been said, disturbed sediments are relatively easy to pick out -- and I am quite certain that the stratigraphy as described in another post is "clean" and undisturbed, and seen for the most part away from the areas of intense human activity.
It's interesting that this dig was conducted under the supervision of Duncan Schlee -- who has also been involved in the digs at Rhosyfelin and Carn Goedog as Dyfed Archaeology's "local representative".  At those two sites I have criticised the digging team for being blissfully unaware of local geology, geomorphology and sedimentology, and for failing to take any account of natural processes in their assessments of the site history.  That's my main gripe with this Dyfed Archaeology Report too -- there is hardly any mention of the sediments and how they have influenced both the siting and the characteristics of the cist graves. As far as I can see, all of the graves are dug into reddish sandy till; if this layer had not been present here, there would probably be no cemetery.  And the slabs used for lining the base, sides and tops of the graves appear to have been locally derived from the till itself and from outcropping ORS shales and sandstones; some quartz pebbles (also no doubt picked up in the vicinity) seem to have been placed on and even inside some graves.   Some questions -- and some answers -- relating to the Quaternary sediments on the site would have been rather relevant, I reckon.
Posted by BRIAN JOHN at 20:10

I heartily recommend last Saturday's Channel Four episode of "Bone Detectives". It centred on a cist burial in what was a rather desolate setting in Caithness, of a young woman who turned out to be one of the Beaker people immigrants (and from the Netherlands). The interchange in the detective story between the 3 ladies was very intelligent. The prehistoric person was buried in a very rocky place which must have been a difficult proposition for the Beaker Folk. One of the best programmes about one excavation I've seen. Probably interesting from a geomorphological, landscape point of view too.