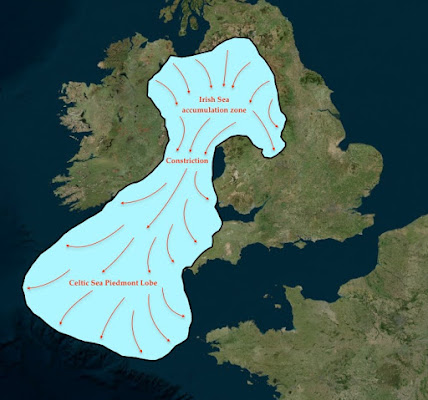 Work in progress.  My attempt to define the footprint, in line with evidence on the ground.  I have ignored all the other parts of the Celtic Ice Sheet for this particular exercise.
After reading this very interesting article by Margold, Stokes and Clark about Laurentide and Antarctic ice streams and their behaviour,  it seems to me that the Irish Sea Ice Stream (over and again during the Ice Age) had many similarities with the ice streams that exported vast amounts of ice towards the peripheries of the Laurentide Ice Sheet -- and sometimes carried ice as lobes beyond the ice sheet edges that were in equilibrium.
The picture emerges of thee segments in the ice stream:  and accumulation zone over the Irish Sea, a constriction zone (squeezed by ice from the flanking ice caps of Wales and Ireland), and a piedmont lobe extending to the shelf edge, as demonstrated by James Scourse and others in recent years.  More work is needed on the contours of this ice mass, but it does appear that south of the constriction in Cardigan Bay and St Georges Channel, there was an extremely flat profile with much lateral spreading.  This was facilitated by very low shear stress due to the presence of saturated and deforming sediments of great thickness.  Maybe the gradient was less than 1m per km towards the edge of the lobe on the shelf edge.
Maybe, for part of the time, Carningli was a nunatak..... and so were the Isles of Scilly and Lundy.  Caldey was, I reckon, completely submerged by ice. 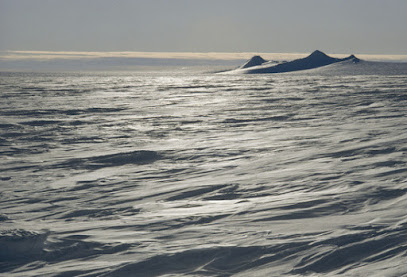 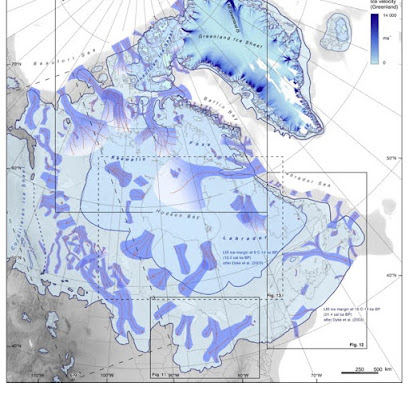 This paper presents a comprehensive review and synthesis of ice streams in the Laurentide Ice Sheet (LIS) based on a new mapping inventory that includes previously hypothesised ice streams and includes a concerted effort to search for others from across the entire ice sheet bed. The inventory includes 117 ice streams, which have been identified based on a variety of evidence including their bedform imprint, large-scale geomorphology/topography, till properties, and ice rafted debris in ocean sediment records. Despite uncertainty in identifying ice streams in hard bedrock areas, it is unlikely that any major ice streams have been missed. During the Last Glacial Maximum, Laurentide ice streams formed a drainage pattern that bears close resemblance to the present day velocity patterns in modern ice sheets. Large ice streams had extensive onset zones and were fed by multiple tributaries and, where ice drained through regions of high relief, the spacing of ice streams shows a degree of spatial self-organisation which has hitherto not been recognised. Topography exerted a primary control on the location of ice streams, but there were large areas along the western and southern margin of the ice sheet where the bed was composed of weaker sedimentary bedrock, and where networks of ice streams switched direction repeatedly and probably over short time scales. As the ice sheet retreated onto its low relief interior, several ice streams show no correspondence with topography or underlying geology, perhaps facilitated by localised build-up of pressurised subglacial meltwater. They differed from most other ice stream tracks in having much lower length-to-width ratios and have no modern analogues. There have been very few attempts to date the initiation and cessation of ice streams, but it is clear that ice streams switched on and off during deglaciation, rather than maintaining the same trajectory as the ice margin retreated. We provide a first order estimate of changes in ice stream activity during deglaciation and show that around 30% of the margin was drained by ice streams at the LGM (similar to that for present day Antarctic ice sheets), but this decreases to 15% and 12% at 12 cal ka BP and 10 cal ka BP, respectively. The extent to which these changes in the ice stream drainage network represent a simple and predictable readjustment to a changing mass balance driven by climate, or internal ice dynamical feedbacks unrelated to climate (or both) is largely unknown and represents a key area for future work to address.
Posted by BRIAN JOHN at 12:57