Glacial deposits in the Bristol and Gloucester region 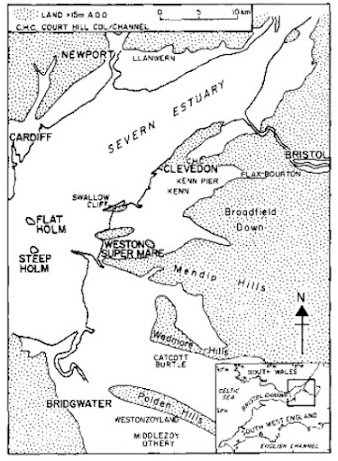 I am still accused every now and then of being a maverick, or the only geomorphologist who believes that a stream of ice originating in the Irish sea flowed eastwards up the Bristol Channel,  eventually reaching the Bristol - Bath area and extending at least as far east as the Somerset Levels.  Rest assured, dear reader, that I am not alone, and that the authoritative view in the field of glacial geomorphology, as expressed in Earthwise, is exactly the same as mine.
The BGS report on the Bristol and Gloucester region is almost 30 years old now, but opinion has not changed, and as we know from this blog, much more information has been assembled since 1992 to confirm the points made in the extract reproduced below.
===========================

Glacial deposits in the Bristol and Gloucester region

http://earthwise.bgs.ac.uk/index.php/Glacial_deposits,_Quaternary,_Bristol_and_Gloucester_region
The glacial deposits of the region are mostly scattered remnants and provide difficult problems of interpretation. The earliest drift deposits are represented by remanié patches of erratic pebbles of quartz, ‘Bunter’ quartzite and, less abundant, strongly patinated flint lying on the surface of or within fissures in the Cotswold plateau up to a height of 300 m above OD. On the eastern boundary of the present region and in adjacent areas to the east, there are scattered patches of sandy and clayey drift with similar erratics, which are now known collectively as the ‘Northern Drift’. The general opinion is that the deposits are heavily decalcified and probably include both tills and the fluviatile deposits derived from them. They predate organic Cromerian deposits in the Oxford area and thus provide evidence for pre-Cromerian glaciation (see summary in Bowen et al., 1986)[1].

High-level plateau deposits in the Bath-Bristol area comprise poorly sorted, loamy gravels with abundant Cretaceous flints and cherts and have been correlated with the ‘Northern Drift’.

The Anglian glaciation is better represented in the district. In the Vale of Moreton there is a three-fold sequence. At the base lies the Stretton Sand, a fluviatile, cross-bedded quartz sand, which has yielded a temperate fauna including straight-tusked elephant and red deer. This was formerly dated as Hoxnian in age but now must be considered to be older. The Stretton Sand is similar to the supposedly younger Campden Tunnel Drift (see below), and it has been suggested that the temperate fauna in it is derived from an earlier interglacial deposit. The overlying Paxford Gravel, which comprises local Jurassic limestone material, has yielded mammoth remains and has an irregular erosive contact with the Stretton Sand. At the top, up to several metres of ‘Chalky Boulder Clay’ with derived ‘Bunter’ pebbles may be present. Thin red clay is locally present immediately beneath the till, possibly representing a feather-edge remnant of the glacial lake deposits of Lake Harrison.

At the northern end of the Cotswolds, in the gap between Ebrington Hill and Dovers Hill, the Campden Tunnel Drift consists of well-bedded sand and gravel with ‘Bunter’ pebbles and Welsh igneous rocks, and two beds of red clay with boulders, probably a till. The deposits occupy a glacial overflow channel, up to 23 m deep, caused by the ponding of the Avon and Severn valleys by the Welsh glacier farther downstream.

Evidence in Somerset and Avon, combined with that from South Wales, for an Anglian glacier moving up the Bristol Channel has been accumulating in the last decade or so. The construction of the M5 motorway through the Court Hill Col on the Clevedon–Failand ridge led to the discovery in the bottom of the col of a buried channel, 25 m deep and filled with glacial outwash deposits and till. Drilling has since proved similar drift-filled channels in the Swiss and Tickenham valleys crossing the same ridge. South of the ridge, and rising from beneath the Flandrian alluvium of Kenn Moor, marine, brackish and freshwater interglacial sand and silt overlying red stony and gravelly till and poorly sorted cobbly outwash material were disclosed in drainage trenches and other works. AAR results indicate that whilst the bulk of the interglacial deposits are Ipswichian in age, samples of Corbicula fluminalis from fluvial deposits directly overlying the glacial deposits give a much earlier date and suggest that the latter are Anglian in age (Andrews et al., 1984[2]). Similar local occurrences of possible till have been reported beneath the Burtle Beds of the Somerset levels. In the light of these and other discoveries, the glacial overflow hypothesis of Harmer (1907)[3] for the cutting of the Bristol Avon and Trym gorges has been revived to explain why these rivers cut through hard rock barriers in apparent preference to easier ways through adjacent soft rocks.

1.  Bowen, D Q, Rose, J, McCabe, A M, and Sutherland, D G. 1986. Correlation of Quaternary Glaciations in England, Ireland, Scotland and Wales. Quaternary Science Reviews, Vol. 5, 299–340.
2.   Andrews, J T, Gilbertson, D D, and Hawkins, A B. 1984. The Pleistocene succession of the Severn Estuary: a revised model based upon amino acid racemization studies. Journal of the Geological Society of London, Vol. 141, 967–974.
3.  Harmer, F W. 1907. On the origin of certain canon-like valleys associated with lake-like areas of depression. Quarterly Journal of the Geological Society of London, Vol. 63, 470–514.
Additional references:
Kellaway, G A and Welch, F B A, 1993. Geology of the Bristol district. Memoir of the British Geological Survey Special Sheet [England and Wales].

Whittaker A and Green G W. 1983. Geology of the country around Weston-super-Mare. Memoir of the Geological Survey, England and Wales, Sheet 279 with parts of sheets 263 and 295.

Andrews, J T, Gilbertson, D and Hawkins, A B. 1984. The Pleistocene succession of the Severn Estuary: a revised model based upon amino acid racemization studies. Journal of the Geological Society of London, Vol.141, 967-974.

Hawkins, A B, and Kellaway, G A. 1971. Field Meeting at Bristol and Bath with special reference to new evidence of glaciation. Proceedings of the Geologists' Association, Vol.82, 267-291.

Gilbertson, D D and Hawkins, A B. 1978. The Pleistocene succession at Kenn, Somerset. Bulletin of the Geological Survey of Great Britain, No.66, p.41.

You say "the authoritative view in the field of glacial geomorphology, as expressed in Earthwise" is just the same as yours.

Are you able to give us a few examples, which may then be used in defence of your own opinion regarding the eastern extent of glaciation?

Most of it is in the bit I quoted -- an Anglian age for the big glaciation -- ice coming from the west, associated with the Irish Sea Glacier -- actual glacial deposits in locations along the motorway route, enigmatic deposits that may well be glacial in origin in the Bath - Bristol area, ice probably extending well into the Somerset Levels, etc. The BGS team members don't draw any conclusions as to how far east the ice extended -- neither do I! But I am still eyeing up the chalk scarp for indications, and hoping for a bright young geomorphologist who can do the hard work.....

My point was that it's high time archaeologists stopped saying things like "ice doesn't travel uphill" or "ice only flows southwards, and not eastwards"-- and time for them to look at the literature.

I'd like to know as then I/everybody could quote some examples when defending the glaciation hypothesis to the archaeological fraternity. Preferably examples in the Bath/ Wiltshire border areas.

In the past on the Blog we have discussed possible glacial signs on the edge of Bath at Bathampton near the railway line and Bathampton farm, for example [you provided possible photographic evidence]. Also near Brown's Folly close to Bathford; and, also near Bathford, the vicinity of Kingsdown, towards Box.

I'd just like to make the local archaeological fraternity in Wiltshire realise that there ARE indications of glaciation, possibly as old as the Anglian, on the edge of their stomping grounds (although, in reality, most of them have psychological mindsets that all the great Wiltshire prehistoric action in around Avebury and Stonehenge landscapes. David Field is an honourable exception to this mindset.).

I've been glancing at sections of Isobel Geddes' book "Hidden Depths..." on Wiltshire's geology & landscapes, but she doesn't mention the above sites.

Yes, Kellaway did a lot of work around Bath -- some of it apparently reported in documents I have been unable to find. i have indeed mentioned some of his findings. He was a good field observer of things, but sometimes not such a good interpreter.......