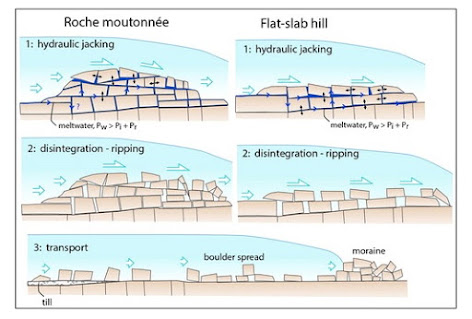 This is an interesting article which purports to have "discovered" a new process of glacial erosion during studies undertaken in Sweden.  Adrian Hall et al suggest that late in the last glacial cycle in Scandinavia, conditions existed on the ice sheet bed  in which "groundwater overpressures" were capable of exploiting bedrock fractures and lifting the surface rock mass, with "fracture dilation" and the creation in some cases of "fracture caves". The authors use the term "hydraulic jacking".   This facilitated bedrock disruption associated with reduced frictional resistance along fractures.  Then came subglacial ripping and displacement, transport and then emplacement of multiple large blocks, left after ice melting as vast spreads of large sharp-edge rock masses dragged up to 100m from their places of origin.

That all sounds very interesting, but I am not sure how well that all fits with the laws of physics.  Is it really possible for "groundwater overpressures" to be so high that they can force water into fractures with so much force that the surface rock mass, and the overlying glacier ice burden, can physically be lifted, allowing sediment to then accumulate in the cavities thus created?  The authors propose that this only happens when an ice sheet is in an advanced state of decay, and after considerable ice thinning,  but I have my doubts........

The authors are justified in drawing attention to the vast boulder spreads that cover much of Sweden, but their map of course incorporates many areas of ground moraine, ice-edge morainic accumulations and many glaciofluvial deposits as well.  Yes, there was warm-based ice flow and high meltwater fluxes, but that does not mean groundwater pressures were capable of lifting millions of tonnes of rock / ice overburden.  Also, I have a problem with the sediment fills of opened fractures, which the authors suggest as some sort of proof of the powerful hydraulic pressures required to "lift" masses of bedrock.  If the water pressures were high enough to lift millions of tonnes of overburden, there is no way that sediments could have survived without being expelled or flushed out.  Also, there is no adequate explanation of how "ripping" or block removal is supposed to work;  plucking or dragging of bedrock slabs from the lee side of roches moutonnees is generally -- and quite sensibly -- assumed to be associated with freezing conditions on the glacier bed.  How does that equate with the large volumes of meltwater and groundwater thought to be flowing through fractures, caves and conduits on the glacier bed?

The authors show in two diagrams how hydraulic jacking, rock disintegration and ripping are assumed to operate on roches moutonnees and on flat-slab hills -- but I am not convinced.  Some of their examples come from the east coast of Sweden, and I'm familiar with evidence of roche moutonnee disintegration on Rödlöga Storskär -- but I think that the jointed bedrock there has simply disintegrated because of high compression under thick compressing ice, pressure release under thinning ice, and conventional freezing-on and block removal afterwards.  In the examples I'm familiar with, I see no need for a new theory involving high volumes of meltwater under extreme pressure. 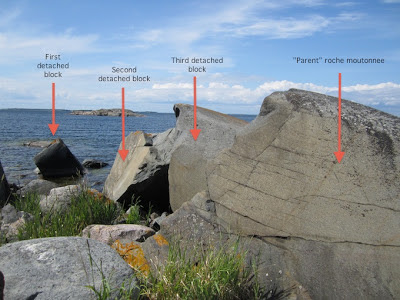 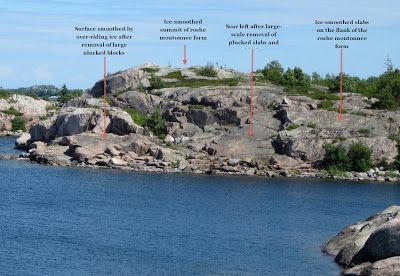 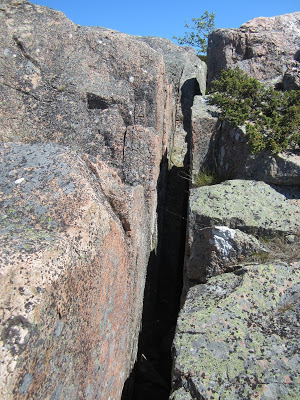 Roches moutonnees in the process of breaking up on the island of Rödlöga Storskär in the Stockholm Archipelago.  I do not think meltwater at high pressure is needed to explain the fractures, caves, chasms and block removal that is much in evidence.

But it's always good to see new theories, and we'll see what response this paper gets from other specialists in ice physics.

In low relief Precambrian gneiss terrain in eastern Sweden, abraded bedrock surfaces were ripped apart by the Fennoscandian Ice Sheet. The resultant boulder spreads are covers of large, angular boulders, many with glacial transport distances of 1–100 m. Boulder spreads occur alongside partly disintegrated roches moutonnées and associated fracture caves, and are associated with disrupted bedrock, which shows extensive fracture dilation in the near surface. These features are distributed in ice-flow parallel belts up to 10 km wide and extend over distances of >500 km. Our hypothesis is that the assemblage results from (1) hydraulic jacking and bedrock disruption, (2) subglacial ripping and (3) displacement, transport and final deposition of boulders. Soft sediment fills indicate jacking and dilation of pre-existing bedrock fractures by groundwater overpressure below the ice sheet. Overpressure reduces frictional resistance along fractures. Where ice traction overcomes this resistance, the rock mass strength is exceeded, resulting in disintegration of rock surfaces and ripping apart into separate blocks. Further movement and deposition create boulder spreads and moraines. Short boulder transport distances and high angularity indicate that glacial ripping operated late in the last deglaciation. The depths of rock mobilized in boulder spreads are estimated as 1–4 m. This compares with 0.6–1.6 m depths of erosion during the last glaciation derived from cosmogenic nuclide inventories of samples from bedrock surfaces without evidence of disruption. Glacially disrupted and ripped bedrock is also made ready for removal by future ice sheets. Hence glacial ripping is a highly effective process of glacial erosion.
PS.  It would be fun, wouldn't it, if this is just an elaborate joke published on April Fools Day?  I can't get it out of my head that there was this fellow called Jack the Ripper, whose name is too close for comfort to the new process being proposed........  Only joking -- or am I?!!