The Vale of Glamorgan enigma 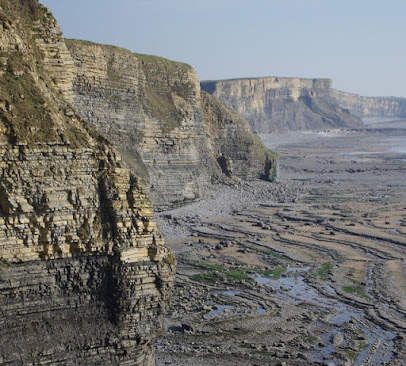 The Vale of Glamorgan coast, with hardly any Quaternary sediments exposed.  Inland, a gentle, rolling, well-wooded landscape with prosperous farms and pretty villages.......

Rural idyll -- the village pond at St Brides Major
The Vale of Glamorgan -- what is the story?  Ice-free enclave, or just an area which happens to have very few exposures of Quaternary sediments, like Jameson Land and Buchan? 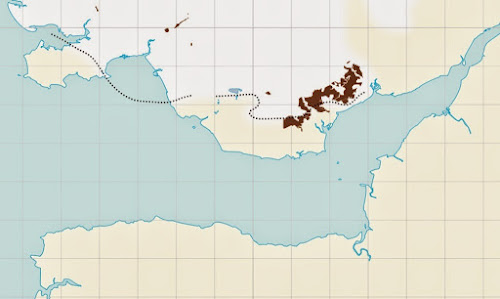 A segment of the BRITICE map supposedly showing (in yellow) that area around
the Bristol Channel that was unaffected by Late Devensian (LGM) ice.  Cardiff is
shown as lying outside the ice limit.

Assumed late Devensian ice limits, after DQ Bowen, as published in the GCR volume on Wales, 1989, p 133.  Most of Pembrokeshire is shown as ice-free, as well as western and southern Gower and most of the Vale of Glamorgan.  But here it is assumed that Devensian ice projected south of the present coastline between Cardiff and Newport. 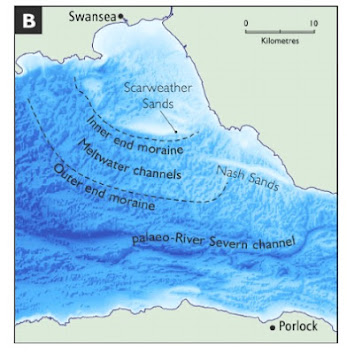 Research in Swansea Bay now suggests that the Devensian ice lobe extending southwards from the Tawe estuary extended at least as far south as Nash Point.  The ice must also have affected Porthcawl and Ogmore and the western part of the Vale.
https://brian-mountainman.blogspot.com/2017/12/ice-in-bristol-channel.html 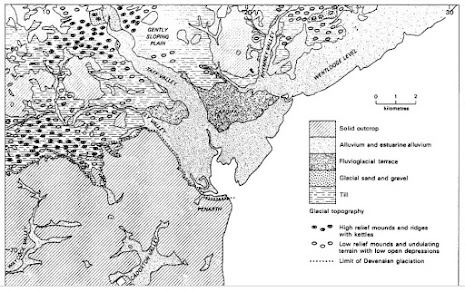 This map from the Quaternary chapter of the Cardiff Memoir shows the main Quaternary
landforms and sediment groups in the Cardiff area.  Note that the whole of the
Cardiff Bay area, as far south as Penarth, is shown as having been glaciated at the time of the LGM. 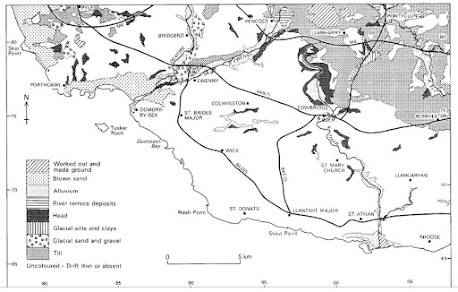 Quaternary sediments in the western part of the vale of Glamorgan, as shown in the new Bridgend memoir for sheets 261 and 262.  Note that "fresh" glacial and glaciofluvial sediments are shown in the NE of the map area and also in the Ewenny Valley and around Bridgend.  Pencoed, one of the key sites of Quaternary Wales, is near the northern edge of the map.  The greater part of the Vale is shown as being virtually free of "drift"........
See this:
New insights into the Quaternary evolution of the Bristol Channel, UKPHILIP L. GIBBARD, PHILIP D. HUGHES and CHRISTOPHER J. ROLFEJOURNAL OF QUATERNARY SCIENCE (2017)ISSN 0267-8179.DOI: 10.1002/jqs.2951https://www.researchgate.net/publication/318198065
See also::

In the "Quaternary" sections of both of these publications there is a great deal of evidence with many cited references, but the question of the "ice-free enclave" is not adequately addressed, and there is a layer of confusion (as in the GCR volume on Wales) caused by the unnecessary labelling of units into the lithostratigraphic scheme of DQ Bowen, which has caused mayhem in Welsh Quaternary studies over the past 30 years......... 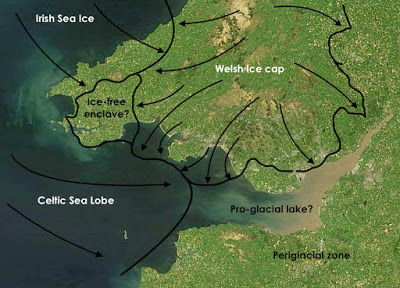 This is one of my recent attempts to define the extent of ice cover in the late Devensian, in South Wales and the Bristol Channel.  As I have explained in other posts, I'm intrigued by South Pembrokeshire, where there are abundant erratics and extensive areas of till and glaciofluvial sands and gravels which appear -- in places like Picton Point and Landshipping -- to be remarkably fresh.  The numerous exposures of fresh till on the South Pembrokeshire coast undicates the presence of a Celtic Sea ice lobe that pushed into the outer reaches of the Bristol Channel, as far as Swansea Bay.  I'm not convinced that the western tip of Gower was ice-free during the LGM, no matter what the senior geomorphologists from Swansea University might say!
So what about the Vale of Glamorgan, shown by Waters and Lawrence as being completely free of glacial deposits and erratics?  We would probably all agree that if the Vale was overridden by Devensian ice, there should be some traces left in the landscape -- but was the area really overridden during the Anglian and other early glaciations?  If, as seems well established, the ice reached Kenn and other localities not far from Bristol, there is no way that the Vale of Glamorgan could have remained ice-free if the glacier involved followed the rules of ice physics -- but where are the traces?
Prof David Bowen (1970) stated that the Vale was very similar to South Pembs, in that an ancient till cover had been largely removed -- and in one of the few exposures to have been described (at Cwm Nash SS905700, not far from Nash Point ), he referred to two layers of slope breccia overlain by "slope wash" incorporating post-glacial organic remains. There was no trace of till.  But he also said that the southern Vale "merits detailed reinvestigation".  Fifty years later, it appears that that reinvestigation has still not been done.
From looking at the published evidence, it seems that the Devensian limit may well have run in a more or less straight line, from the mouth of Cardiff Bay at Penarth roughly westwards through Cowbridge to Porthcawl.  The situation in the Bridgend - Pencoed - Ewenny area is so messy that it's best to assume that it was covered by Devensian ice -- unless strong evidence emerges to the contrary. (The BGS surveyors have labelled the till and glaciofluvial deposits in the area as "Devensian" -- I agree that that should be the default interpretation.)
So the "ice-free enclave" or "driftless area" is actually quite narrow, with a maximum north-south extent of about 8 km.
Watch this space........

https://naturalresources.wales/media/682624/nlca36-vale-of-glamorgan-description.pdf
Sands and gravels outwashed from the melting ice front are preserved locally as terrace- like features in the main river valleys, for example in the Ogmore Valley beween Bridgend and Ewenny, and in the Thaw Valley between Howe Mill Farm and Gigman Mill.

The latter location, SE of Llandough and S of St Hilary, needs investigation to see how the "outwash terrace" relates to nearby glacial deposits.

I await with interest....

Greg has promised some photos of what he thinks are glacial deposits on the coast near Porthcawl. in the older of the two BridgendeMemoirs, Cantrill says he is quite certain about two distinct tills at Pencoed -- the lower (older) one is clay-rich and full of erratics that have apparently come from Pembrokeshire. The upper till seems to represent a late advance of ice from the north -- from the Coalfield. Same glaciation, two episodes? Or two different glaciations?

I don;t understand why Wilson et al (in the Memoir update) are so sceptical about Cantrill's descriptions. He was a pretty careful observer.

The "finger" of glacial and glaciofluvial deposits down the Ewenny Valley is interesting -- deposits around Ewenny and Bridgend, to within 3 kms of the coast.

And more glacial deposits around Porthcawl -- very difficult to interpret......