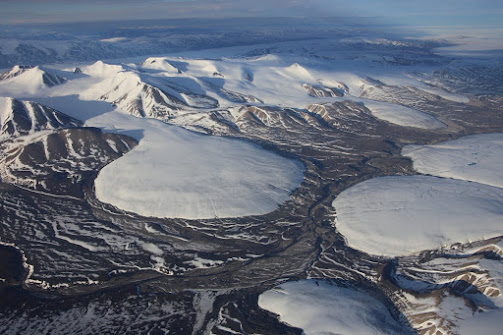 Here is a nice reminder that glaciers always spread  laterally when they are unconstrained. This rule applies regardless whether the glaciers are cold-based or warm-based, and regardless of whether they are large or small.
The Irish Sea Ice Stream, having flowed through St George's Channel and vis the Celtic Deep, must have decanted onto the broad open plain now covered by the Celtic Sea.  It cannot possibly have flowed in a narrow lobe such as that shown by many authors over the last decade or so, since there are no constraints on lateral spreading.  The most reasonable assumption is that it spread from the south coast of Ireland to the coast of Cornwall, possibly constrained by the coastal cliffline in each case.
Below, three images of the Malaspina Glacier in Alaska -- the piedmont lobe formed of ice once the feeding glaciers exit from the mountain front of the St Elias Range. 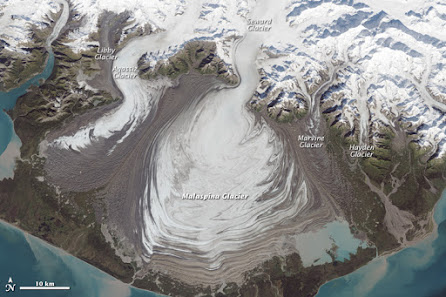 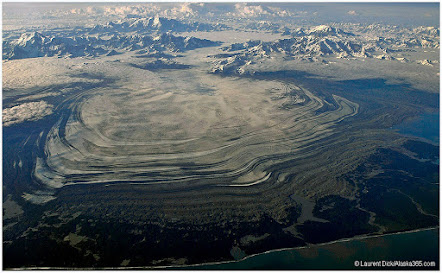 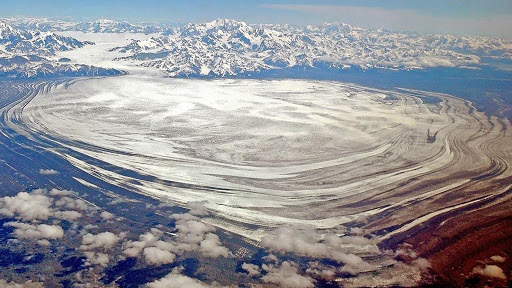 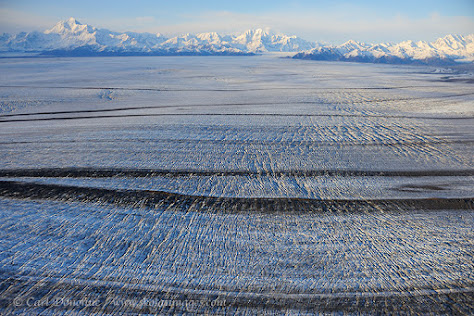 What interests me about this piedmont glacier (the most intensively studied in the world) is that the ice surface from mountain exit point (or constriction) to terminus is perfectly conventional, approximating to the ideal equilibrium profile worked out by glaciologists many moons ago. 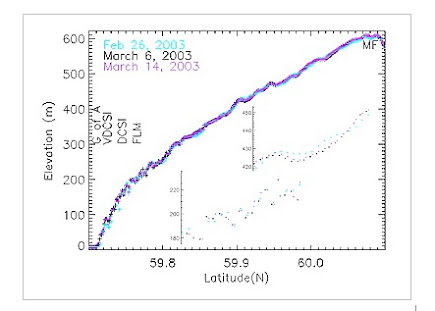 The surface gradient is maintained throughout, apart from minor reverse slope areas which appear to have a pattern coinciding with subglacial drainage routes.  The explanation is that the voids associated with these routes are sometimes filled or partly filled by ice subsidence and localised surface lowering.
There is a deep bedrock trough beneath the piedmont glacier, but it is not deep enough to constrain flow, and so much ice is coming from the active glaciers behind the mountain front that the piedmont glacier "overflows" the trough edges and spreads laterally until an equilibrium is reached between supply and wastage.
The relevance of all this to the Celtic Sea situation is rather obvious......
It's intriguing that the Malaspina ice surface drops from 600m to zero over a distance of just 40 km, even with a very gentle surface gradient.  That's a drop of just 15m per km  on an approximate equilibrium profile.  If we assume rather similar conditions for the Celtic Sea piedmont glacier (or the outer end of the Irish Sea Ice Stream) let's assume that the snout at the shelf edge around 27,000 years ago was at -200m.  Neil Glasser and others have estimated that the ice surface elevation in mid Wales at the LGM was around 1200m.  Let us assume that the ice surface altitude in St George's Channel was approximately the same, or a little lower, at 1000m.  This gives us a total ice surface drop of 1200m, constriction to snout, over a distance of c 400 km -- ten times the distance involved in the Malaspina Glacier situation.  That gives a surface drop of just 3m per kilometre.
Even if the drop of the ice surface from constriction to snout was c 2,000m,  that gives an average surface gradient of just 5m per km, one-third of the observed gradient on the Malaspina glacier lobe.  Was that sufficient to maintain forward momentum all the way to the shelf edge?  And was there sufficient ice coming through the St George's Channel constriction, even with supplements from the Welsh and Irish ice caps, to fill the Celtic Sea basin in the manner which I am proposing?
I have discussed this before, here:
https://brian-mountainman.blogspot.com/2019/07/more-on-ice-gradients-in-celtic-sea.html
https://brian-mountainman.blogspot.com/2011/02/glaciological-dilemma.html
If we search for glaciers or lobes with exceedingly shallow gradients, there are one or two examples in the literature: 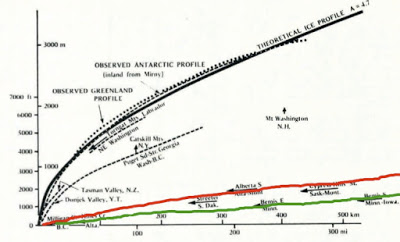 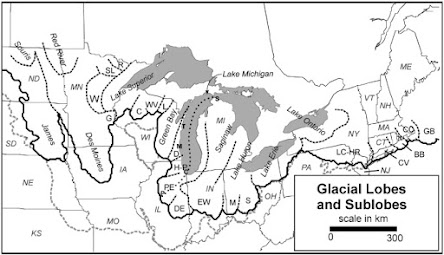 The two shallowest known gradients (interpreted from scattered moraine ridges on valley sides) are on the ice lobes of the Laurentide Ice Sheet, where the ice has flowed across depressions with thick deforming sediments.  They  involve surface drops from c 600m to zero in a distance of 400 km and a drop of 300m to zero in a distance of 400 km.  The two gradients here are 1.5m per km and .75m per km.  The Bemis ice lobe surface dropped just 340m over a distance of 550 km; and the Streeter or South Dakota (James River)  ice lobe surface dropped 375m over a distance of c 400 km. It seems that ice can still move forward in a lobe when gradients are less than .5m per km.   Can these North American lobes be taken as indicators towards an understanding of how the Celtic Sea ice piedmont behaved?  Maybe........
https://www.cambridge.org/core/services/aop-cambridge-core/content/view/FCACBBE24503ABF9C88CB77C3E4CB2D2/S0022143000023352a.pdf/div-class-title-surface-profiles-of-the-laurentide-ice-sheet-in-its-marginal-areas-div.pdf
https://reader.elsevier.com/reader/sd/pii/S0012825215000203?token=72AE03089B379D8E16A78FFBA905E8975CBA2E94112C4D1F2C008870EF1D07472CC33FBBEC8DEF52A8FE977041C138F6
Watch this space.......