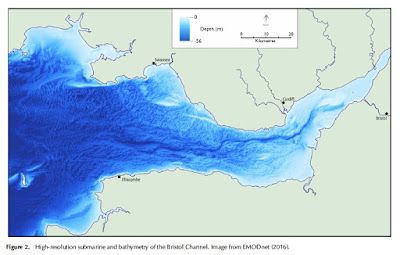 There's a very interesting new publication by Gibbard, Hughes and Rolfe which provides fascinating new material on the glaciations of the Bristol Channel - Severn Estuary region.  The authors refer to at least three glacial phases, at least one of which involved a substantial ice incursion into Somerset. Archaeologists, please take note........

Here is the citation:

ABSTRACT:
A synthesis of new publically available borehole and bathymetric data, combined with a wealth of
other existing disparate data sources, reveals new insights into the Quaternary history of the Bristol Channel area.  Sediment boreholes throughout the Bristol Channel confirm the area was glaciated in the Pleistocene. Till is present below marine deposits and, in some areas, is visible morphologically as submerged moraines. In the central and eastern Bristol Channel the submerged valley course of the palaeo-Severn is very clear in new high-resolution bathymetric surveys. This former river course and associated tributaries cross-cut through glacial sediments in the Bristol Channel. At least three phases of glaciation are recorded in the Bristol Channel, one related to the southern limits of a Late Devensian Substage ( Marine Isotope Stage (MIS) 2) Welsh Ice Cap which reached into Swansea
Bay, an earlier Devensian (MIS 4–3) glaciation associated with Irish Sea ice, and another older glaciation that is associated with ice that filled the entire outer and central Bristol Channel. The age of the older Bristol Channel glaciation is still open, although it pre-dates the Devensian (Late Pleistocene) and must date to the Middle Pleistocene. It is therefore evident that Pleistocene glacial and fluvial activity, combined with subsequent postglacia sea transgression, directly account for current morphometries of the Bristol Channel and Severn Estuary, and the current geography of the SW British Isles.

I recommend a reading of this article -- it's written in good plain English, mercifully free of convoluted techno-speak.  Its key findings are interesting, and the authors agree that there was a substantial early glaciation (which has to the the Anglian Glaciation, around 450,000 yrs BP) during which Irish Sea Ice filled the Bristol Channel and the Severn Estuary and flowed into Somerset.  How far the ice travelled to the east is a matter of debate, and so a dashed line is used on their key interpretive map: 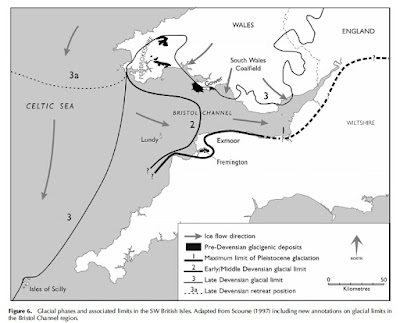 I think the authors could have been a bit braver with this "early glaciation" line, and as suggested many times on this blog, I think the ice at the time of the GBG pressed against the coasts of Devon and Cornwall and pushed south of the Isles of Scilly.

The lobe of ice pushing in over Lundy Island in the early / middle Devensian is to my mind not all that well supported, and is too dependent for comfort upon some cosmogenic dates that might well need correcting.

I'm also not very keen on the Late Devensian line, shown running south from Milford Haven to the Scilly Isles.  I don't think this is well supported sedimentologically, and it doesn't make glaciological sense either.  I think Late Devensian ice pressed well into the Bristol Channel embayment, and I remain convinced that some of the "pre-Devensian sediments" shown on the map may well prove to be Late Devensian too.

All good fun.  The debate will continue -- but this paper is a welcome addition to the literature.

Looks like the Prescelli might have been a good location for early colonisers after the Devonian (last ice age). The broader Stonehenge area would also have been attractive due to the warm springs.

Chris -- Devensian, not Devonian. Actually this was the last glacial episode of the Quaternary Ice Age. Just being pedantic........

What we could do with are some bluestones turning up in a Mesolithic context at Blick Mead or one of various other Mesolithic sites near Amesbury and the Avon - that would clinch both Chris's notion of Man's long - held fascination with these exotic stones AND, simultaneously, the Glacial Transport hypothesis. N.B. MPP never found even a grain of bluestone at his hastily - named (for the tourists and the gullible/overly - imaginative/and/or Daily Mail readers) "Bluehenge".

Today I've been on an excellent archaeology walk near Heytesbury, in antiquarian William Cunnington territory, if not actually to Boles Barrow. On the way back, by car, I popped into a roadside cafe and was confronted outside with a large, brash English Heritage advert: STONEHENGE: UNMISSABLE! It seems it is now compulsary to visit, as well as to lap up all their marketing fiction and hype.