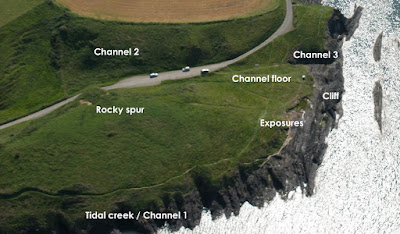 Further to my earlier post about the exposures now to be seen at Ceibwr, here are some more photos, from the flanks of the rocky spur that separates Channel 1 from Channel 2.  Again, no complete sequence is to be seen, but at the northern tip of the spur we can again see TWO tills of different ages, one of them solidly cemented and the other fresh, separated by stained and bedded gravels: 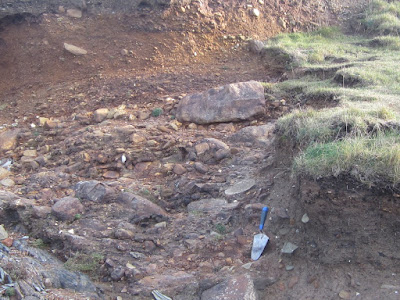 Sediments resting on an abraded rock surface, parts of which are still affected by waves during extreme storms coinciding with high tides. The rock surface, cut across thin-bedded shales, is at bottom left.  Resting on it is a stony deposit with cobbles and larger erratics which is interpreted as an ancient cemented till.  It is stained by iron oxide and manganese oxide cement, and has a slightly purple tint in its colouring. Above it we see fine-grained glaciofluvial gravels with a foxy red or brown colouring.  the gravels contain occasional larger cobbles.  The grey-blue uncemented till seen beneath the turf to the right of the photo is clearly younger than the stained and cemented deposits. 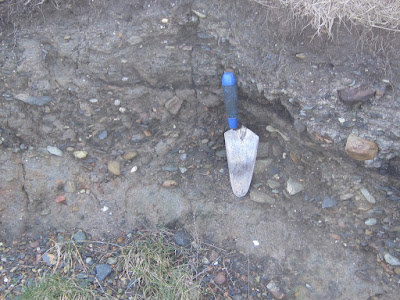 Close-up of the youngest (uncemented) till deposit, showing relatively stone-free Irish Sea till at the base, with a more stony layer above (at the position of the trowel), and a sandy and silty colluvium / sandloess close to the ground surface. 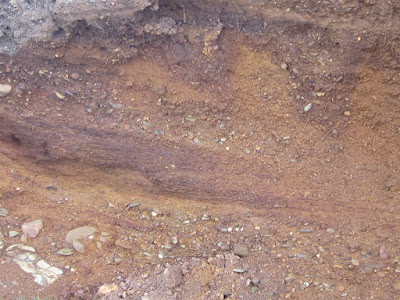 Close-up of the cemented stratified gravels in the same section, with traces of what might be frost "churning" under permafrost conditions and possible ice-wedge casts.  Alternatively these may be primary sedimentary structures, related to downslope flows of saturated materials in a dead-ice environment. 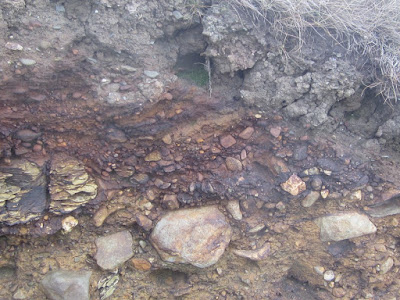 In a separate exposure just a few metres away, we see cemented till at the base, capped by a manganese oxide cemented hardpan, with foxy-red glaciofluvial gravels above.  Then, above a sloping erosional contact we see fresh blue-grey till and colluvium -- apparently redeposited and mixed up by downslope movement. 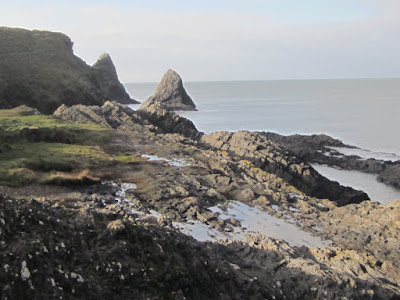 The deposits described above rest on this wave-washed platform.  It is difficult here to distinguish modern erosional features from old ones -- but abraded surfaces do seem to pass beneath the deposits. 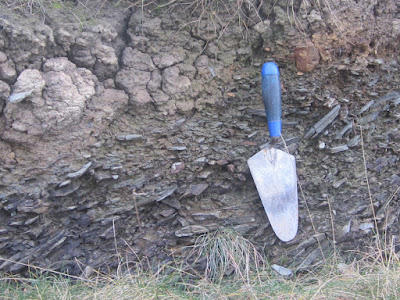 Exposure on the eastern flank of the rocky spur, showing pseudo-stratified slope breccia made of local mudstones, beneath fresh and uncemented grey-blue till.  Slope deposits are found in the exposures only in locations where there are adequate upslope outcrops of solid rock and a steep gradient.  This is an indication that periglacial or permafrost conditions preceded the arrival of glacier ice at this location -- exactly as seen at many other North Pembrokeshire sites. 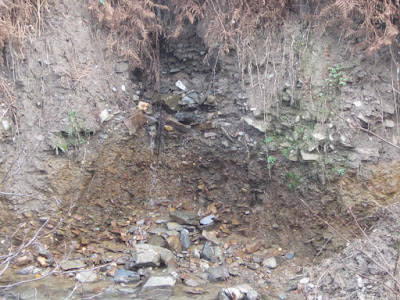 River cutting upstream from the footbridge, in the main Ceibwr valley.  Cemented foxy-red gravels are seen here beneath blue-grey till with abundant clasts derived from local slope breccias. 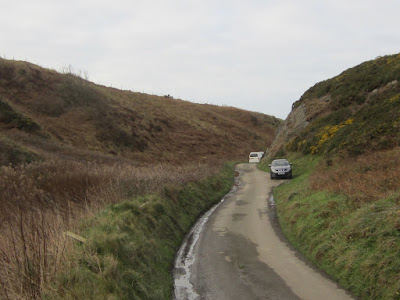 Steep-sided channel 2.  The rocky spur is on the right.  Note the rock-cut slope near the cars. 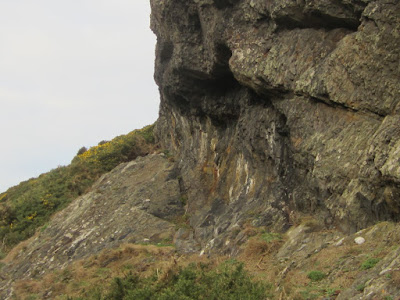 Apparent meltwater erosional features beneath an overhang on the flank of the rock spur.  The location is near the white vehicle shown in the above photo.  The smoothed rock surfaces have been damaged by subsequent weathering processes, suggesting great age.

I think it's important to get these images onto the public record, since this is going to be a very important Pleistocene site.  Overall, the stratigraphy is confirmed as follows:

Note that there are no traces here of the raised beach (Ipswichian) which we see at Poppit, Abermawr, Porthclais and many other locations.

Further work is needed on the abraded rock surfaces which are exposed by occasional storm wave assaults at the exit of Channel 2.  Are these surfaces ice-moulded?  Are they simply old channel floors cut largely by meltwater erosive forces?  Or are some of them -- at various altitudes -- affected by present-day and ancient coastal processes? 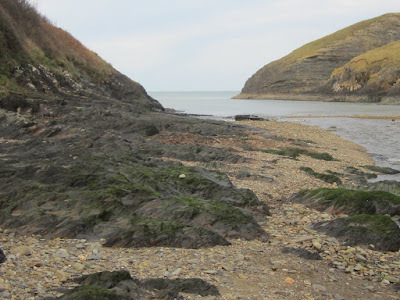 Flattish rock surfaces, eroded across dark Ordovician mudstones, at the head of the Ceibwr tidal creek, near the limekiln.  Are we looking here at the bed of the meltwater channel, or are present-day coastal processes responsible?  However these surfaces have been cut, it seems that the sediment fill in the channel, between HWM and LWM, is not more than a few metres thick.