Archaeology on the Byers Peninsula --or maybe not....... 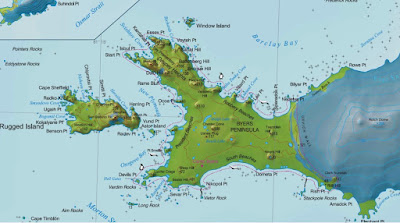 During the last few weeks of 1965 David Sugden and myself, accompanied by a botanist and a zoologist, camped in the snowy wastes of the Byers Peninsula, at the western end of Livingston Island in the South Shetlands island group.   We were employed by the British Antarctic Survey, and our South Shetlands project (looking at raised marine features and phases of glaciation) was one of the major field projects of the 1965-66 summer season.   It was supposed to be high summer, but we had frequent snowfalls and even blizzards during our time there, following an unusually snowy winter and spring.  We saw enough of the raised beaches and other geomorphological features to get an ambitious work programme completed  but it was tough, working in such a bleak and beautiful place for the whole of December without any backup at all, and with only intermittent radio contact with the outside world.   Our base camp was located near the eastern extremity of South Beaches, because the captain of RRS Shackleton, the BAS support vessel, refused to land us and our supplies further to the west.  That meant long slogs on skis into our main research areas, and many subsidiary camps which were occupied for just a few days at a time.

This brings me to a new map showing "archaeological sites" on the Byers Peninsula. Because the Byers Peninsula is the largest ice-free area in the South Shetlands island group, it was heavily used by sealing parties hunting for fur seals and elephant seals between 1820 and 1822 -- even though the islands were not discovered till 1819.  Both American and British sealing fleets operated around the shores of the islands, with upward of 100 vessels used each summer.  Many vessels took home cargoes of more than 70,000 skins, and it is estimated that over a million animals were killed -- and by 1823 the fur seal on the islands was extinct.  It was one of the greatest and fastest animal extinctions in history.  Fifty years later the fur seals had recovered some of their lost territory, but in the 1870's American sealers returned, and within a few years all of the fur seals were exterminated again.

Gradually the fur seals are returning.  In 1965 - 66 we made several sightings of the animals on the fringes of vast colonies of elephant seals, and since all the seals are now protected re-colonisation proceeds -- albeit at a very slow pace.

There are no proper records of the sealing operations, but they were commercially competitive and shrouded in secrecy, and the best sealing beaches were jealously protected.  Occasionally, there was open conflict, and shore parties were occasionally abandoned by captains who had little respect for human life.  Records suggest that at the end of each sealing season the killing and processing shore parties left behind them scenes of almost indescribable horror........

There is a now a great interest among Antarctic historians in the South Shetlands sealing operations, and this is one of a number of recent publications:

This paper concentrates on two sites near the western end of South Beaches -- and the researchers have uncovered fascinating evidence of how the shore parties lived, and how they worked during the killing seasons.  I have no doubt at all that their records are authentic and valuable. 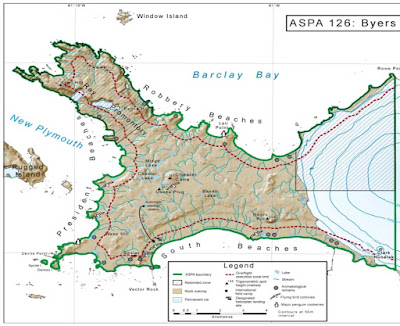 But then I looked at this map of "archaeological sites"-- and decided that some of the locations marked look remarkably familiar! I am pretty sure that some of them are our 1965-66 camp sites, marked by circles of stones (brought in to place on our pyramid tent vallances so as to stop them from taking off during storms).  At our base camp we had five tents in a cluster -- so that means five circles of heavy stones or boulders.  In addition, at this site and some others we had to build "stone walls" or lines of boulders designed to keep elephant seals at bay -- since some of the young bulls thought it would be quite pleasant to lie on top of a flattened tent (regardless of whether there were people inside) instead of on a mucky and stony beach.  Then there were toilet pits and rubbish pits -- some of which can still be traced in the landscape -- and small piles of stones or cairns used for keeping primus stoves and other items off the snow-covered or slushy ground.  In short -- lots of "habitation" traces which could easily be mistaken for nineteenth-century sealers' encampments.

All good fun.  It's quite jolly to have been personally responsible for things referred to as "archaeological features" -- and we should maybe feel some sympathy for the archaeologists who have made big mistakes rather closer to home with regard to stone circles and cromlechs. 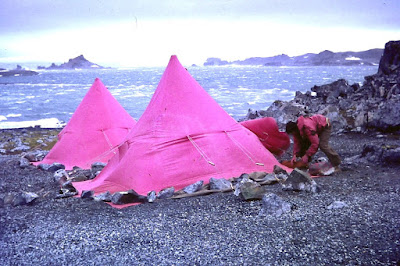 How to stop a pyramid tent from taking off......... and afterwards, when you are long gone, a nice arrangement of boulders is left behind. 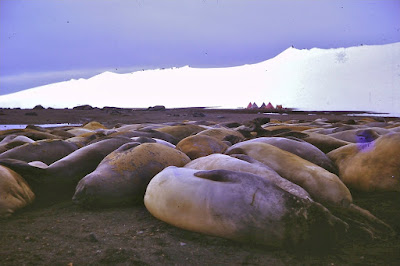 Elephant seals and Byers Peninsula base camp in the middle distance

If you were to put "Tipi ring" into your search engine you will see many examples of the stone circles.They are a common feature on the Plains of North America.There are also some excavation reports available.If the same feature was found in Britain,which i believe they are,they would probably be described as Roundhouses.

I agree -- there are many circular features in the Pembs uplands which might be Bronze Age round houses -- and then again they may be relatively modern sheepfolds or even dens made by adventurous children........ to its credit, Dyfed Archaeo Trust surveyors are usually rather circumspect about dating and origins. Unlike some others who shall be nameless..........