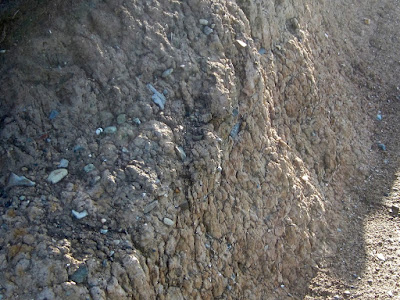 Dessicated Irish Sea till on the clifftop near Ceibwr.  This is a massive till with a clay-rich matrix -- presumably made from dredged sea floor deposits from Cardigan Bay.   Here the till is at least 2m thick.

On the clifftops between Ceibwr and Witches Cauldron, on the coast between Newport and St Dogmaels, there are many exposures of till, sometimes with a gravelly matrix and sometimes clay-rich as in the classic Irish Sea till found at Gwbert and Newport.  These exposures are found at an altitude of 75m; further to the SW they occur on clifftops that are 150m high -- so we can be sure that the ice that came in from the north and north-west during the last glacial episode surmounted these cliffs along the whole of the North Pembrokeshire coastline.    We knew that already, but confirmations are always good........ 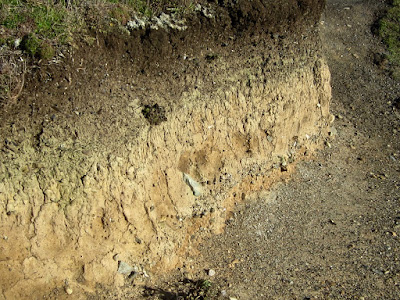 Another exposure of matrix-supported till -- the matrix is mostly silt and sand, maybe derived from older sandloess and other coastal deposits.  The reddish iron-staining  may be post-depositional, or maybe inherited from the colour of the over-ridden deposits.    Above the till is a slope deposit  which is organic-rich and with occasional signs of stratification; some layers contain small fragments of shale breccia, and oitheres appear to be made of colluvium. 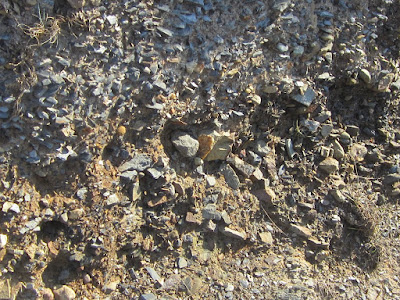 Stony till (lower 50 cms) made for the most part of brecciated bedrock fragments, overlain by c 50 cms of brecciated slope deposits made of local shales and sandstones. 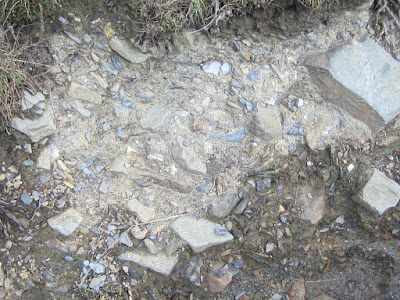 Another patch of coarse till adjacent to the coast path.  Beneath the till there are slope deposits that appear to have been churned in a permafrost environment. 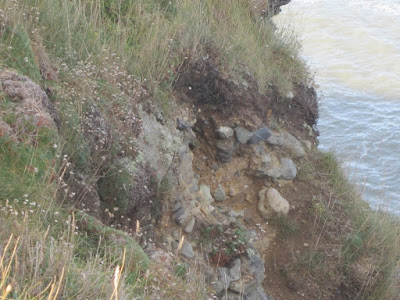 A patch of stony till packed with erratics, in an inaccessible clifftop location near Witches Cauldron.  Here the till is c 1m thick.

The stratigraphic relationships between the till and other deposits are exactly the same as in other North Pembrokeshire exposures.  There are brecciated slope deposits (head) beneath the till in places, where the coastal slope is adequate for the downslope mobilisation of weathered and frost-shattered bedrock.  There are thin brecciated materials above the till as well, grading upwards in colluvium, sandloess and modern soil.

There is no reason to doubt that all of these deposits date from the Devensian glacial episode and from the Holocene.

However, there are also older materials to be found hereabouts, as I shall explain in another post.