About a year ago I did a post on the glacial deposits around Picton Point, at the junction between the two Cleddau Rivers.  I was intrigued then and am even more intrigued now, having been there for another visit a couple of days ago.

What was particularly interesting in 2017 was the high concentration of rounded and sub-rounded pebbles and cobbles on the foreshore to the west of the headland.  I assumed that there were fluvioglacial gravels in the neighbourhood, and this was confirmed by the geological map, as seen in the BGS online Geology Viewer. 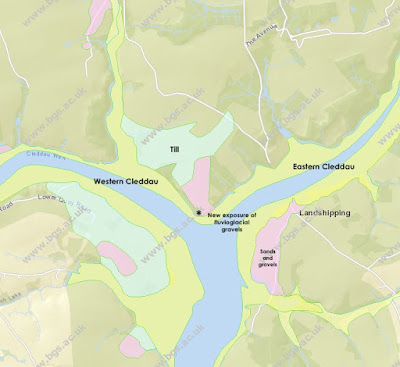 The junction of the two Cleddau Rivers at Picton Point.  Key to the sediments:  blue = till; pink = fluvioglacial gravels; yellow = silt and clay on the modern intertidal mudflats.


Recently there has been a small landslip on the drift cliff about 50m west of the headland.  The cliff is about 15m high, and is much overgrown, but there is a new exposure that shows at least 2m of fluvioglacial gravels overlying brecciated or broken bedrock of shales and mudstones.  The lower metre or so of the gravels are iron-stained, but above that they appear fresh and uncemented. 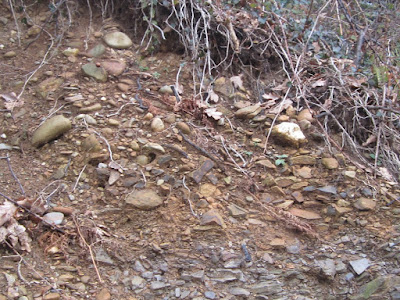 The lower part of the exposure.  At the base, unstained brecciated bedrock debris.  Above that, c 40 cm of iron-stained slope breccia grading up into c 1m of iron-stained fluvioglacial cobbles,
sands and gravels. 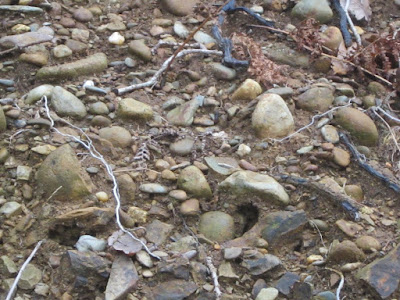 The upper 1m of fluvioglacial materials, loose and unstained, incorporating a wide range of erratics.  Some of the cobbles are up to skull size.

From a cursory examination, the erratics incorporate a wide range of dolerites, rhyolites and volcanic rocks similar to those found on Ramsey Island  and the western end of the Dewisland Peninsula.  This matches observations made on the foreshore last year.

The deposits here may even be thicker than 2m -- the uppermost 5m of the cliff face has a gentle slope and is covered with thick vegetation.  The gravels are exposed at the surface in the fields inland of the cliff -- so the thickness may be c 7m.  Apart from the iron-staining at the base, these deposits look fresher and less weathered (one might even say less rotten) than the gravels at Llangolman:

I have on many occasions discussed the spreads of till and fluvioglacial materials here and there on the south Pembrokeshire land surface, well to the south of the putative Devensian ice limit.  Here they look remarkably fresh, and because they are uncemented in an environment in which there is much free iron and manganese in the groundwater, I am tempted to say that they are Devensian in age.  But since the gravels are in a sheet extending up to 25m above the river level, that would mean that glacier ice must have been present across the whole of the landscape hereabouts. That in turn means that the ice extended at least 10 km inland from the shores of St Bride's Bay.  And that in turn suggests that the other glacial and fluvioglacial deposits in South Pembrokeshire might also be Devensian rather than Anglian or Wolstonian in age.  Very confusing.........

One idea that has been discussed in the past is that the till deposits of South Pembrokeshire are of Anglian age, but that some of the fluvioglacial deposits were emplaced by heavily-charged meltwater rivers flowing southwards from the Devensian ice edge when ice wastage set in -- maybe after 20,000 years ago.  As noted elsewhere on this blog, it is reasonably proposed that  much of the water carried in the Gwaun-Jordanston  meltwater channel system was carried westwards and then southwards, flowing through the Trefgarn Gorge and then along the Western Cleddau valley past Haverfordwest and into the inner reaches of the Daugleddau.   There are large expanses of gravels in the valley, including some that look like gravel terraces which were partly removed as the river level dropped.  There is one such gravel terrace remnant at Cherry Grove in Haverfordwest, less than 100m from where I grew up.

But could the Picton Point gravels belong to this same system of Devensian gravel terraces?  I doubt that very much.  For a start, there do not seem to be long strips of gravels parallel with the course of the present river.  Second, the gravels here seem to be at too high an altitude.  And thirdly, there are far too many large -- skull-sized -- cobbles and boulders in the gravels, had they originated up to 20 km away in the western foothills of Preseli.  Contained clasts of this size must indicate an origin not far away -- and that means ice in the neighbourhood, within a km or two.

In the Geological Survey Haverfordwest Memoir, p 215, there is a reference to an interesting section on the shore of the Cleddau confluence, immediately to the east of Oxhouse Farm.  The location lies between Landshipping Ferry and Landshipping Quay.  Grid ref SN007113.  The section shows:

On the geological map an extensive spread of sands and gravels is shown as the surface deposit  in this area, so we can assume that it overlies the till.