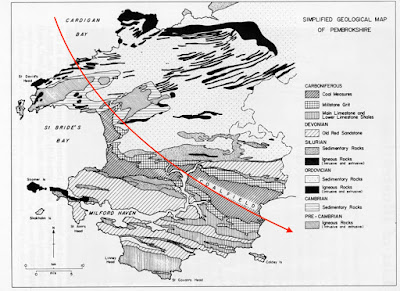 Picton Point is the south-facing headland that separates the western Cleddau and the Eastern Cleddau, in the tidal inner reaches of the Milford Haven waterway.  It's a delightful spot, with wide vistas to west, south and east.  My wife and I went over there for a walk the other day, and I was struck -- not for the first time -- by the frequency of erratic boulders and cobbles scattered along the shoreline.  These have not been carried here by longshore drift or by the tides -- there is very little wave action here.  So the erratics have dropped out of pre-existing glacial and fluvioglacial deposits as the low cliffs are nibbled away.

The main processes here (as at Mill Bay, the famous place from which the Altar Stone was supposed to have come) are biological and mechanical.  Tree roots are exposed as the Coal Measures sandstones and shales are sapped or undercut; then the trees tip over more and more until they fall down onto the beach; when that happens, loose rock debris on the cliffline ( already broken up to some degree by vast and expanding root systems) is dislodged and comes crashing down too, resulting in coastal retreat by a few more feet.  And so the process continues.  On the land surface above the cliffline there are glacial and fluvioglacial deposits, and these are dropping down onto the foreshore bit by bit as the coast retreats. The process is slow, but inexorable, and is essentially one of sudden or catastrophic cliff collapses in different locations as one big tree after another comes down-- usually during an extreme storm event like Storm Ophelia or Storm Brian in recent weeks.  A huge oak tree came down close to Picton Ferry during one or the other of those storms. 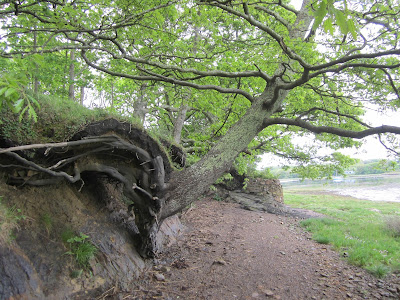 This tree will be down before too long, and when it falls a chunk of the
cliff face will come with it.

(As it happens, similar processes have been at work at Craig Rhosyfelin, dislodging large blocks of rhyolite at irregular intervals and causing fallen and smashed-up rock debris to accumulate against the rock face.  There, however, the trees may have always been much smaller.) 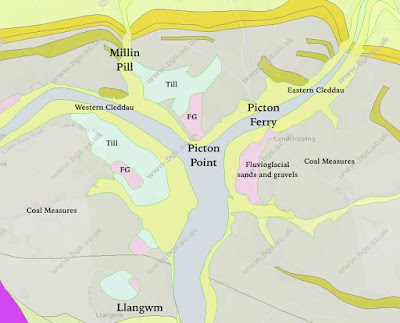 Annotated image from the Geology of Britain Viewer (BGS).  Here we can see that glacial deposits are quite abundant in this area.

Erratics are scattered on the foreshore to the east of Picton Point, but they are far more numerous on the western side.  Most of them are less than 50 cms in diameter.  They are rather well rounded, and heavily stained.  This suggests two things to me -- one, that they have come from fluvioglacial sands and gravels rather than from till;  and two, that the deposits are old (Anglian or Wolstonian) rather than Devensian. 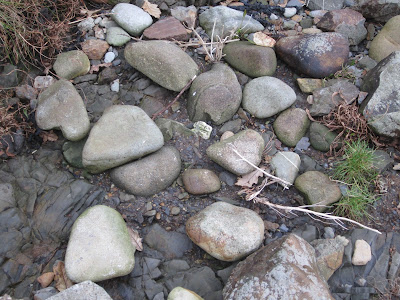 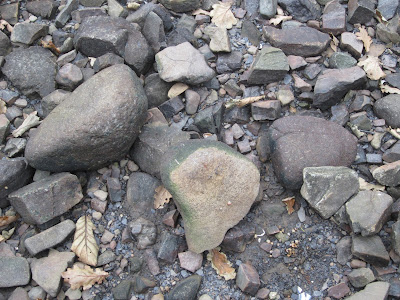 Two images from the foreshore to the west of Picton Point. Most of the rock fragments are quite angular, having come from recent rockfalls on the retreating cliffline; they are mostly Coal Measures sandstones.  But the rounded cobbles include rhyolite, dolerite, gabbro, volcanic ash, and Cambrian sandstones -- almost certainly from the St David's Peninsula

These are early days in my Picton Point investigations -- watch this space.....

Yes, it's an interesting place. Just put "Picton Point" into the search box and you'll find some more posts.......