The bluestone quarries -- the best hoax since Piltdown Man? 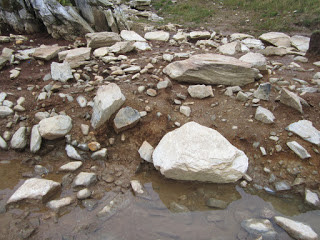 Rhosyfelin.  Does anybody else see a loading platform and a revetment here?  No?  Neither do I. 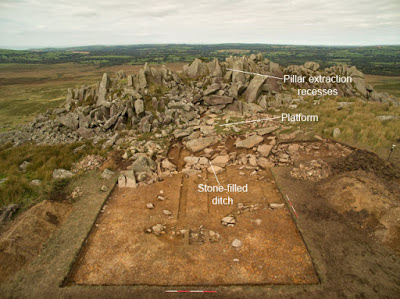 Carn Goedog.  Does anybody else see a stone-filled ditch, a platform and a pillar extraction point when they look closely?  No?  Neither do I. 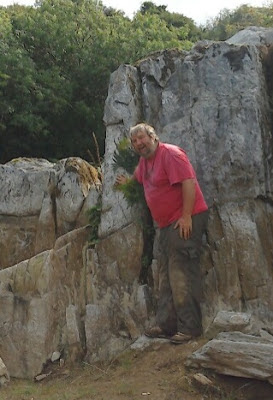 Rhosyfelin.  Does anybody else see the "exact extraction point" from which a bluestone monolith pillar has been extracted?  No?  Neither do I. 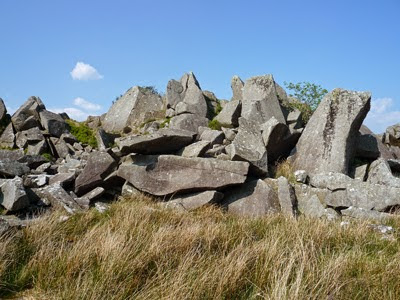 Carn Goedog.  Does anybody else see evidence of a Neolithic quarry from which bluestone monoliths have been extracted?  No?  Neither do I. 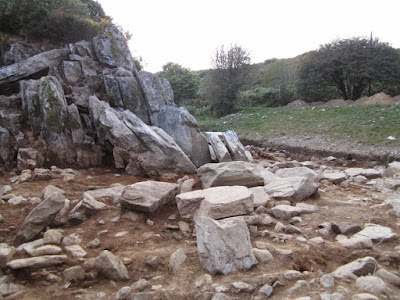 Rhosyfelin.  Does anybody else see a quarrying forecourt and working surface here?
No?  Neither do I.

((I have another 20 or 30 photos showing natural features interpreted as having "engineering significance"  -- you'll find them in other posts on this blog.   I have resisted the temptation to put them all in here, since you would simply get bored..........))

The Art of the Scientific Hoax

I have done various posts on hoaxes before, including the following:

Anyway, having observed the antics of various archaeologists (and geologists) over the last eight years, I am now completely convinced that the claimed “discovery” of Neolithic bluestone quarries in Wales is the most imaginative and professional hoax since Charles Dawson “discovered” Piltdown Man in 1912. (1)  What is possibly most impressive about it is that it has been built up systematically now over a period of eight years without any of the conspirators spilling the beans......... 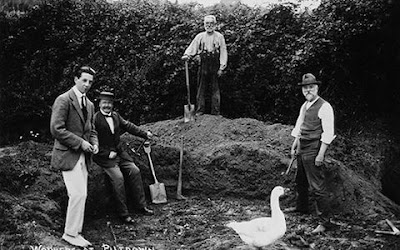 Charles Dawson (sitting) at the site of his "earth-shattering" discovery........ 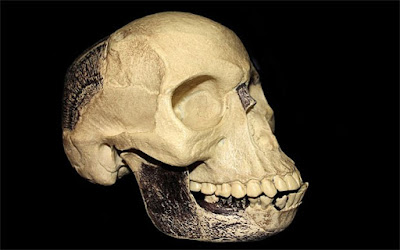 It's a pity that scientific hoaxes have gone out of fashion, since they cause much embarrassment to the experts who are fooled by them and much innocent amusement for everybody else. Mind you, they don't do much for the reputations of the perpetrators -- although, if you are lucky, like Charles Dawson, you might be dead before you get rumbled.

As followers of this blog will know, year after year I have conducted — in all seriousness — a forensic examination of all of the evidence placed into the public domain by the archaeologists who claim that there are bluestone monolith quarries at Rhosyfelin and Carn Goedog in the Preseli uplands of Pembrokeshire; and time and again I find that the evidence just does not withstand even superficial scrutiny (2). So I'm sure that the archaeologists, led by Professor Mike Parker Pearson of University College London, have pulled a fast one and have joyfully fooled the media, the public and a large part of the archaeological establishment.

For a scientific hoax to be successful, it requires three preconditions:

1. A gullible public predisposed to believe in “new discoveries” — in this case, stories about the great skills of our prehistoric ancestors and the meaning of Stonehenge.

2. A colourful and swashbuckling lead character who has a respectable past and a strong media presence.

3. A body of “evidence” cited in support of the hoax which cannot be checked or replicated by anybody else.

All three preconditions are amply fulfilled in this case. In these days of alternative facts and false news, almost anything will grab the attention of the public.  The mere use of the word "Stonehenge" in a press release guarantees wide media coverage.  MPP is a popular figure who has been called the “Indiana Jones” of British archaeology, with a reputation for an endless stream of controversial theories. As far as I am aware, there was no independent scrutiny or peer review of the dig sites at Rhosyfelin and Carn Goedog while MPP and his team were at work between 2011 and 2016.   And the excavations have now been filled in, so that nobody can go back to them to check the cited “evidence”.  Wonderful!  That's a perfect scenario for a successful hoax……….

There has been extensive media coverage of the “bluestone quarries” since 2011, and this has ensured a considerable flow of research funding to finance eight digging seasons at the “quarrying” sites and elsewhere, as the archaeologists claim to be hunting for “proto-Stonehenge” in the North Pembrokeshire landscape.  Interestingly enough, the breathless and uncritical coverage has come not just in the tabloid press but also in popular archaeological and historical magazines.  Even science journals which -- presumably -- have some respect for the scientific method, have been swept along in the torrent of fake news coming from the digging team and their university press offices.

But clues as to what was going on were picked up at an early stage. The archaeologists who started digging at Rhosyfelin in 2011 announced before they broke the turf that they were investigating a quarry — which raised a few eyebrows. (Scientists do not normally announce their results before their research has started…..) At all stages of the dig, when I examined the open excavations in the company of other geologists and geomorphologists, we became more and more certain that all of the claimed “quarrying” or engineering features were entirely natural. Three of us published two peer-reviewed papers in 2015 containing our findings, but the archaeologists refused to acknowledge the existence of the papers, and even now, three years later, they will not admit that there is a dispute going on (3).  This is not just bad manners; it is scientific malpractice.

It gets worse.  After eight years of digging, not a single field report has been published. There have only been two reviewed journal articles, the first described by a senior academic as “one of the worst papers I have ever read” and the second one equally suspect (4).  The radiocarbon dating evidence from the two excavation sites does nothing to support the idea of quarrying, and has indeed been claimed to comprehensively falsify the quarrying hypothesis (5). No earth scientists have been systematically involved on-site in the annual excavations, which means that no serious questions have been asked when features have been interpreted as man-made. There have been no “control digs” at similar sites which migh demonstrate that the “quarrying" features are distinct or unique. And finally, not one of the many sites examined thus far for traces of “proto-Stonehenge” has proved to have anything to do with the iconic monument on Salisbury Plain (6). At every setback, the archaeologists have refused to back off,  have simply made their story more elaborate, and announced their next anticipated big discovery………..

So do the archaeologists still have any credibility? No.  Has the hoax finally run out of steam? Yes.

Here is a suggestion to the six senior members of the “bluestone quarries” project.  You've been rumbled.  Come clean, and admit that you have been enjoying a jolly prank with a serious intent in the background — namely to demonstrate how easy it is to promote a hypothesis that is underpinned by zero evidence.  Job done.  You should now, with smiles on your faces,  remind the public and the media that they should not necessarily believe things simply because they are repeated over and again, with apparent conviction, by senior academics.

Having thought more about this, I'll add a fourth precondition needed for a successful scientific hoax:

4. The ability to suppress or "drown out" anything inconvenient that might show up the hoax for what it is.

This can be achieved by doing deals with big business or grant-giving bodies which see that there would be large negative impacts for them should the hoax be exposed.  They will help you to promote the hoax and to suppress independent scientific research and conclusions.  You can also "drown out" inconvenient expressions of concern by using your contacts to repeat the hoax in print as often as possible and to develop it bit by bit in a way that can be represented as "hypothesis confirmation."   And of course you can vilify your opponents behind the scenes and use your establishment contacts to ensure that anything they write has little chance of being published.   This is all very jolly as long as you are not concerned about scientific ethics.

(1)
Charles Dawson’s “Piltdown Man” hoax, perpetrated in 1912, is one of the most famous scientific hoaxes of all time. Dawson (with the aid of other persons unknown) fabricated bits of two human skulls and claimed that he had discovered, near the village of Piltdown, the “missing link” between apes and human beings. There were concerns about his “discoveries” but the hoax was not proven until 1953, many years after Dawson’s death in 1916.

What you forget is: these intrepid explorers followed their Dream and, so the stories go, SAW a rare Preseli Rainbow...... and......... somehow travelled OVER it.

It is not certain, however, that any of them retained their faculties. The public must be the judge of that.

Some of the more adventurous have allegedly compared their rainbow experience to taking Magic Mushrooms.

I have made a tweak to the back end of this post -- by adding a fourth "successful hoax precondition".

You should get your hoax message across to the likes of the Western Mail, BBC Wales Radio and TV, and BBC History Today magazine.

Also that satirical/far - out magazine Myris's alter ego, R.I., does book reviews for, the Fortean Times.

I see Fortean Times, too, has a Blog Site!!

This is rather jolly -- from 10 years ago, a post about a hoax about a hoax. All rather garbled, but somebody has been having fun....
I bet the hoaxer was MPP himself, just getting in some training.