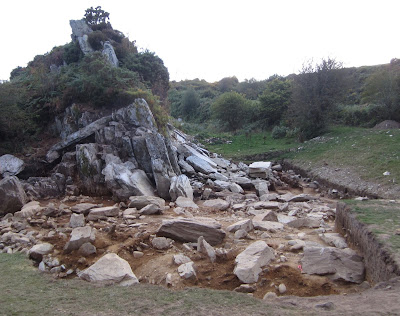 Neolithic bluestone quarry?  You must be joking, man.......

Below I have re-posted a blog from eight years ago.  Suddenly, hoaxes and practical jokes are right back in the frame again.  I have been pondering, on this wonderful warm spring morning, and have come to the considered judgment that this whole bluestone quarrying business is actually a rather splendid "gullibility experiment" conducted by a group of smart academics who will, any day now, spill the beans. They will put out a statement saying:

"Haha!  Fooled you all!  There never was any evidence for these things that we have labelled "Neolithic bluestone quarries"!  We just wanted to see how far we could go with a completely mad idea, inventing evidence, taking nice photos and drawing complex diagrams, placing it all in the learned and popular media, and promoting it through lectures and press releases.  Now we must come clean, and admit that we have just been having fun creating an edifice that has no foundations.  It has cost a lot of money and involved a great deal of effort.  But there has been a serious motive behind all of this -- and it has all been in the cause of science. The lesson is this:  do not believe everything that you are told by senior academics.  Test everything.  Scrutinize everything.  And draw your own conclusions strictly on the basis of what can be observed."

Frightening, isn't it, the extent to which a whole academic community can be swept along by something completely irrational? 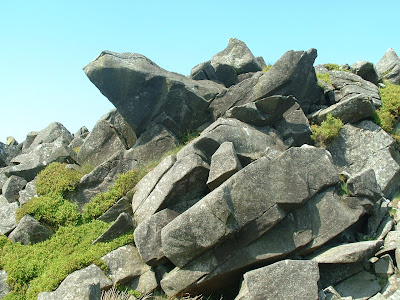 All hoaxes have their day, and eventually bite the dust, leaving senior academics looking very foolish.
Posted by BRIAN JOHN at 07:51

Hi Brian,
In half-hearted defense of HH Thomas, I'm pretty sure he didn't seek fame. Perhaps merely an acknowledgement. His findings were presented years after what amounts to a casual stroll through Pembrokeshire, and then only at the behest of others who were on the same track. He never visited a couple of the now-key sites, and he never followed up.

That it turns out he was correct about the Stonehenge bluestone provenance is almost secondary. I tend to believe he was long past caring by the time he published.

That said, Richard Bevins completely shreds him in a recent publication, while Rob Ixer is a bit more sympathetic.

See forthcoming Antiquity May/June edition for more on HH Thomas and the bluestones.

There be a great difference between planting an ape-skull and a 2/4 tonne proto-orthostat so that it lies at an impossible 'natural' angle to the vertical quarry face.

"Impossible" ?? Come along now, Myris -- that is not a word to be used lightly. The stone is not 2-4 tonnes in weight. It is 8 tonnes, as agreed by everybody who has measured it and done the sums. And not a single geomorphologist or geologist who has been to the site in my company has remarked bout the positioning of the stone as being at all unusual. When a stone falls from a crag it is rather difficult to predict its trajectory and its final resting place. It depends how it falls and what it hits or gets deflected off on the way down. As I have pointed out many times on this blog, there are other large stones as well which lie up to 5m away from the rock face at Craig Rhosyfelin and even further away, out in the valley floor, in other locations in the valley.

And please don't keep on calling it a "proto orthostat" since that demonstrates a clear interpretational bias. You know how much it upsets me and my fellow bloggers when people lose their objectivity.......