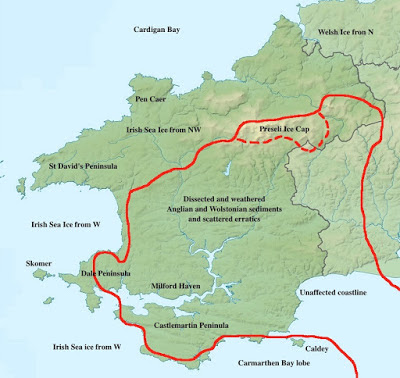 I'm still convinced that Devensian ice has affected Caldey Island and has left till there -- and that's just a few miles further east. If ice flowed over Caldey it might have touched Old Castle Head, but because of the military presence there it is out of bounds. I'm now rather convinced that Devensian ice flowed from the west towards the east in this area, and that the great cliff rampart of south Pembrokeshire was an effective barrier which prevented the ice from transgressing inland. The cliffs are for the most part about 35m high, with a further slope of about 10m in the tidal and sub-tidal zone before a gently sloping sea bed with considerable irregularities runs further out into Carmarthen Bay.

There is a fabulous resource for looking at the sea bed here:
http://fishing-app.gpsnauticalcharts.com/i-boating-fishing-web-app/fishing-marine-charts-navigation.html#9.69/51.6675/-4.7369 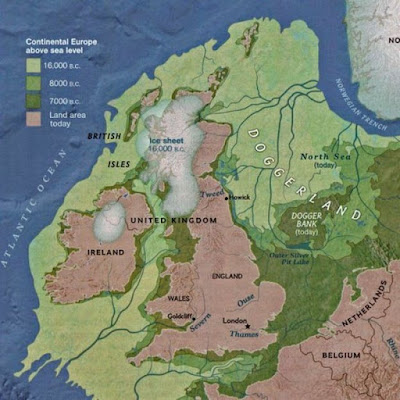 When the Devensian ice of the Irish Sea Glacier arrived in West Wales there was no sea and no coastline.  Instead, there was a steep rampart or coastal slope where the old cliffs had been in the preceding interglacial -- probably masked at least in part by the rockfalls and accumulated slope deposits built up during a long Early Devensian and Middle Devensian periglacial episode.  This is something I postulated (on the basis of a vast amount of evidence) in the 1960's -- and it is still accepted as valid.

So was this rampart or barrier prominent enough and continuous enough to effectively determine the position of the ice edge?  I am increasingly convinced that the answer is "yes" -- and that the ice, as it moved eastwards into Carmarthen Bay, did not have the strength or thickness to surmount this barrier, except in a very few locations.

Previously I have shown the Devensian ice pushing much further east up Milford Haven and across the western part of the Castlemartin Peninsula, but I am changing my mind on that...............  The reason is that on my recent walks on the S Pembs coast I have been reminded quite forcefully that the most common deposit on the clifftops and in coastal embayments like Manorbier Bay, Freshwater East and Swanlake is head -- a periglacial slope deposit (maybe not always periglacial) up to 4m thick and made up of broken bedrock in a sandy of gravelly matrix.  The thickness of the rockfall / slope deposit depends, as ever, on the characteristics of the local bedrock and the proximity of the old cliffline or bedrock source.  Here are a few examples of this material: 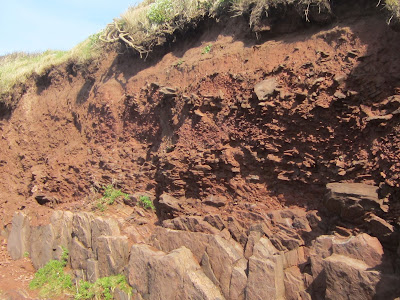 Devensian slope deposits (head) c 2m thick in the face at cliff face at Manorbier -- Old Red Sandstone (Devensian) bedrock.  Above the head, c 20 cms of colluvium or hillwash, and then 75 cms of blown sand and modern soil. 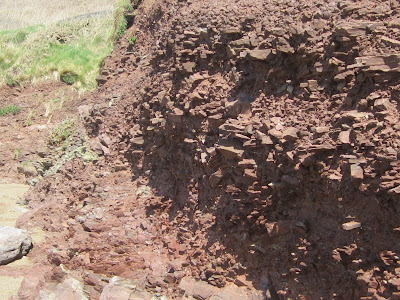 Slope deposits up to 3m thick in Swanlake Bay, close to the sandy beach.  Note pseudo stratification and variations in block size, which migh relate to environmental changes or to changes in bedrock source lithology.  Still to be investigated...... 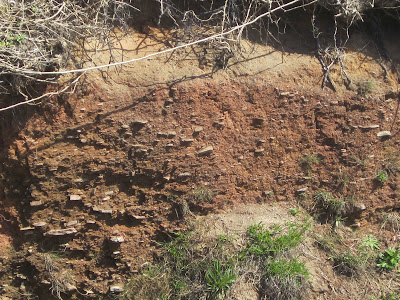 Relatively fine-grained slope deposits exposed in the cliff face on the eastern flank of Freshwater East Bay.  At the top of the sequence sandy loam or colluvium. 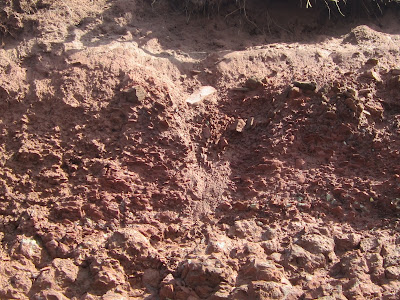 This is very interesting -- a nice example of a fossil ice wedge, exposed in the cliff near the beach in Manorbier Bay. The edges of the wedge are clearly demarcated, and the rock fragments that have fallen into it are standing vertically -- that is quite typical.  My interpretation here is that the slope deposits have accumulated during the Devensian cold episode, and that the wedge might have formed during permafrost conditions during the Younger Dryas.

All that having been said, there are certainly exotic stones and pebbles on all of the local beaches, some of them distinctly reminiscent of the volcanics of Western St David's Peninsula and Ramsey Island.  There are also scattered patches of what appears to be relatively fresh till, in locations which currently seem to defy rhyme and reason  -- some day we will no doubt work it out!  Some examples: 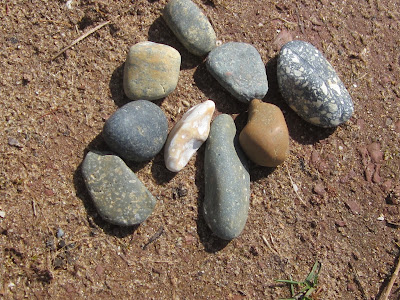 Exotic pebbles from the beach at Manorbier.  They are most likely to have come from degraded till deposits in the immediate neighbourhood. 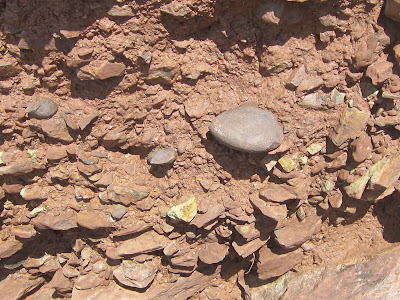 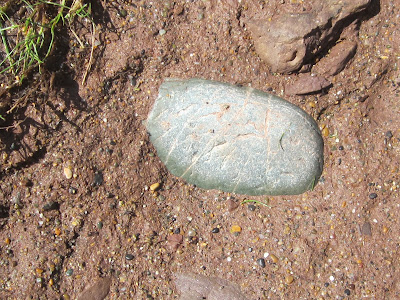 This appears to be undisturbed till, exposed in the cliff face at Swanlake Bay.  Note the abundant small pebbles from multiple locations in the clay-rich matrix.  The greenish cobble  does not appear to carry striations, but it displays abundant pressure fractures, some of which are conchoidal.  That suggests ice transport......

All in all, the evidence is stacking up that this south Pembrokeshire coast  was in some places unaffected by Devensian glacier ice, and in other places the ice touched the present coastline and left traces including coherent till.  The till is very reminiscent of that exposed in the Scilly Islands and on Caldey.  Watch this space.......