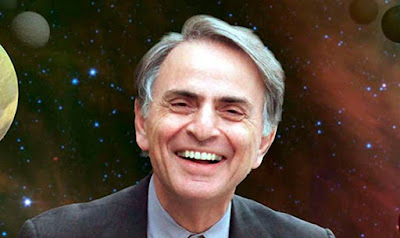 In the past, we have discussed Occam's Razor and Hitchens's Razor in our discussions of the conduct of science, and I have been reminded that Carl Sagan has also spoken of this issue.  Here is an extract from Rational Wiki:

Either way, the phrase is central to the scientific method, and a key issue for critical thinking, rational thought and skepticism everywhere.

The evidence put forth by proponents of such things as gods, ghosts, Neolithic bluestone quarries, the paranormal, and UFOs is highly questionable at best and offers little in the way of proof. Even if we accepted what evidence there is as valid (and it is highly debatable if we should), limited and weak evidence is not enough to overcome the extraordinary nature of these claims. (I added the bit about the quarries…..)

Alice and Bob are two friends talking after school. Alice tells Bob that she watched a movie the previous evening. Bob believes her easily, because he knows that movies exist, that Alice exists, and that Alice is capable and fond of watching movies. If he doubts her, he might ask for a ticket stub or a confirmation from one of her friends. If, however, Alice tells Bob that she flew on a unicorn to a fairy kingdom where she participated in an ambrosia-eating contest, and she produces a professionally-printed contest certificate and a friend who would testify to the events described, Bob would still not be inclined to believe her without strong evidence for the existence of flying unicorns, fairies and ambrosia-eating contests.

OK -- maybe it is stretching things a bit to refer to Neolithic bluestone quarries in the same breath as fairies, unicorns, dragons and ghosts, but you get the general drift.......

I have also been pondering on how far out the quarrying hypothesis is when compared with all of the research that I have ever done.  In geomorphology, if you are looking at a new site, you assume from the outset that the story told in the landforms and the sediments will be the EXPECTED or NORMAL story, that matches what you pick up from all the other sites you examine.  That's how regional stratigraphies are established.  If you find anomalies, you then have to explain them -- maybe because there has been a landslide, or a blockage leading to the creation of a temporary lake, or some such thing.

The problem which the archaeologists have faced, from the beginning, is that they arrived hoping to show that Rhosyfelin was exceptional or extraordinary.  It had to be a quarry in an area where there were no other quarries.   So it could not be validated by examining the site next door.  Indeed, examining the site next door might have been deemed dangerous, since if they had found exactly the same set of features, they would not have been able to call them "engineering features" at Rhosyfelin.  So the feeling was probably that it was best not to look, and to try and convince the world that what they were looking at was truly extraordinary.  The trouble is that everybody who looks at the site -- and the so-called "evidence" -- finds it not to be extraordinary at all.  Just perfectly normal rockfall features in a site where there is also a perfectly normal Quaternary sediment sequence.

There is no way that anything from Rhosyfelin can cause us to take seriously the claim that this is where Neolithic quarrymen slaved away to win bluestone monoliths designed for transport to Stonehenge, or even to  Eglwyswrw.  There is nothing extraordinary.  The hypothesis is rejected.