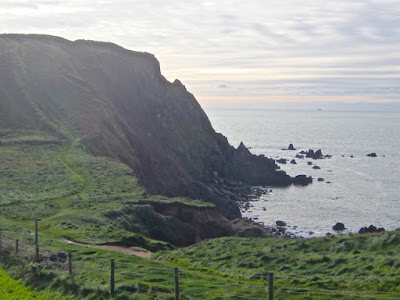 The western end of the drift--filled Dale Valley, looking out towards Great Castle Head.  The drift cliff top is deeply gullied, with one of the gullies used for the steps leading down to the beach.  The top of the drift cliff is c 28 m above OD.


I have been back to look at those enigmatic deposits at Westdale Bay, on the west side of the Dale Peninsula and about 1 km from the village of Dale.  In 1962 the sequence looked like this:

There were glimpses of a raised beach at the time, and above it a mass of relatively undisturbed reddish till was exposed in the flanks of a deep gully, overlain by about 6m of pseudo-stratified "head" containing many erratics.  Towards the top of the sequence there was an increasing proportion of sandy loam or sandloess, with a thin soil at the top of the section.

Today the sequence exposed in the gully and above the beach looks like this: 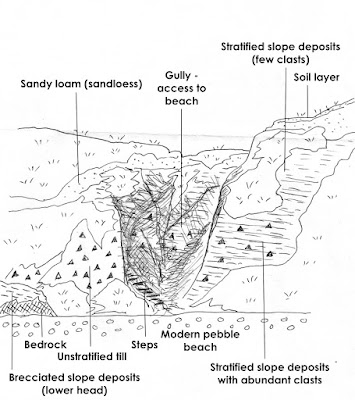 The Dale Valley has been eroded along the Ritec Fault, which is marked by smashed-up Old Red Sandstone beds.  So the head of the bay is a real mess -- with rockfalls, slips and debris avalanches all over the place, sometimes making it difficult to discern the Quaternary stratigraphy.   But while no exposures of the raised beach are currently visible, the sequence seems to be as follows:

5.  Highest in the sequence:  modern soil 10 cm - 20 cm
4.  Colluvium made for the most part of sandy loam / sandloess -- carried down from both flanks of the valley.  Thickness c 3m -- no clear base.  Grades down into:
3.  Stratified slope deposits made of colluvium, some brecciated ORS bedrock, and redeposited till.  Up to 10m thick.
2.  Reddish till with a sandy and gravelly matrix and abundant erratics including igneous cobbles and boulders.  In places seen to rest directly on bedrock. In places 3-4m thick.
1.  At the base, pseudo-stratified slope deposits made of rockfall material and brecciated bedrock, max 2m thickness.  May be indicative of a periglacial environment? 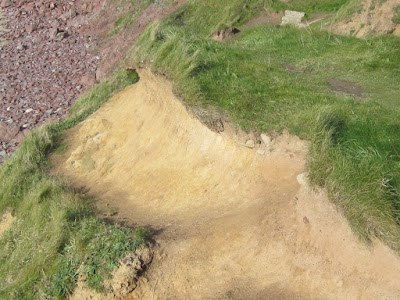 (4)  Colluvium capping the till and stratified deposits.  This is similar to the sandloess found in other areas, but also contains erratic clasts and bedrock fragments 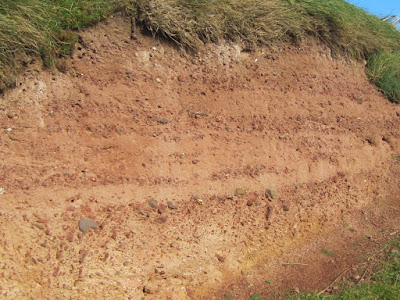 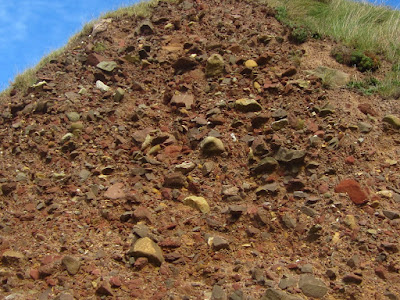 (2)  Typical "south Pembrokeshire till" packed with erratics from many different lithologies -- many rounded, faceted and striated. 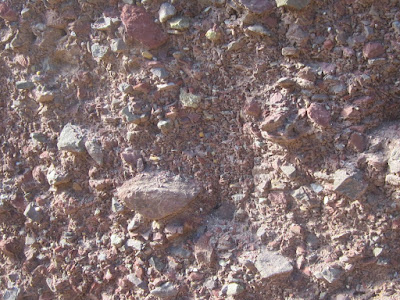 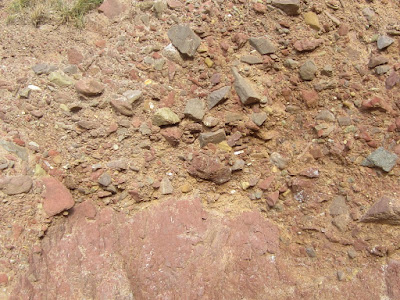 (2)  Basal till resting directly on bedrock 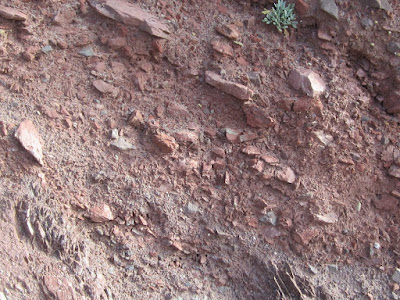 (1) Rockfall debris and brecciated ORS slope deposits shown to be resting directly on bedrock, and overlain by till

One thing to emphasise is that there is no deposit here which I would describe as fluvio-glacial.  So I do not see any depositional role for meltwater in this sediment sequence.  The lower brecciated slope deposit (lower head) and the till have the same relationship as they do in many other west Pembrokeshire locations.

Flowtills and fluvio-glacial layers are missing here, and there is no evidence for shearing or other structural disturbances similar to those at Abermawr.  But why are there no meltwater deposits here, whereas just a couple of km away, at Mullock Bridge, we have a classic kame terrace with thousands of tonnes of sands and gravels laid down by fast-flowing glacial meltwater?

The stratified slope deposits above the till must be the stratigraphic equivalent of the "ribble drift" at Abermawr -- they must be classed as colluvial.  But over what period of time did they accumulate?  And what precisely were the environmental conditions at the time?  These deposits continue to be somewhat enigmatic.......... 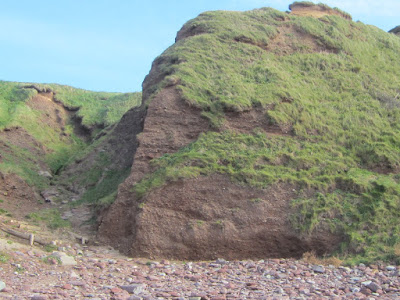 In the southern part of the exposure the stratified slope deposits occur right down at the base of the drift cliff, at present-day beach level. 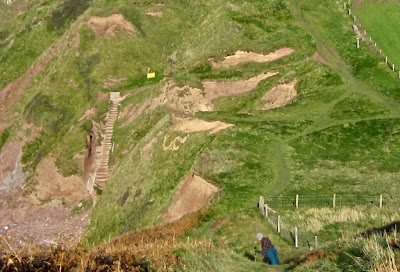 Looking down at the deeply gullied cliff exposure at Westdale Bay.  There is considerable erosion and slumping, and exposures are changing all the time.

PS.  It's strange that this is a RIGS designated site, and in the citation reproduced below there is no mention at all of the Pleistocene deposits.  Enigmatic they may be, but they are clearly important enough to be protected!  I might just drop a line to the powers that be......

This RIGS is one of the few places where the Ritec Fault is exposed and accessible in a coastal location. On the south side of the bay, the shattered rocks bear witness to the power of the Variscan earth movements as the Lower Old Red Sandstone strata were deformed and dislocated along the fault zone. Westdale Bay also displays a representative section through the upper part of the Sandy Haven Formation comprising a series of rhythmic units of conglomerates, sandstones and red mudstones with calcrete development. Furthermore, the Townsend Tuff is recorded as cropping out near The Hookses on the north side of the bay. The tuff is a volcanic air fall deposit that has been laid down on coastal mud flats and now forms a sediment made of volcanic fragments that is about 1.8 m thick at this locality. The tuff, red mudstones and sandstones are all dipping steeply to the south in Westdale Bay as a result of the Late Caledonian (Acadian) earth movements.