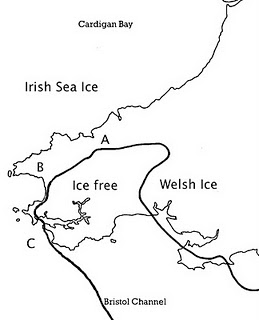 Lines on a map.  One of the lines shows the position of the present coastline, which may or may not be correct, depending on the state of the tide.  The other line shows the suggested edge of the Devensian glaciers in the area -- but how sharp was the edge in reality? 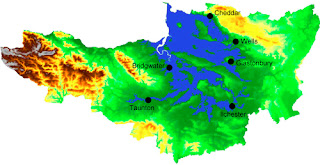 Lines on a map, with added colour.  The Somerset Levels are in blue, and the other colours are used to indicate land surfaces between specific upper and lower altitudes.  Might it be that the line marking the transition from yellow to green also shows approximately the extent of the snow-covered or glaciated uplands at the time of the Greatest British Glaciation?

Why is it that we all love drawing lines on maps?  Well, maybe not ALL of us -- maybe geographers are worse than normal people in that they are taught to love lines on maps, and to fill up empty spaces by drawing lines on them.  Much more satisfactory than putting dots on maps -- and very often, if we have lots of dots, we seek some sort of order by joining up the dots with lines, or putting in lines which separate out those areas with high densities of dots from those with lesser densities.  It can all become very mathematical too -- if not absurd -- as I discussed in some posts about ancient wisdom and sacred geometry a few months back.

I got thinking about this the other day when I had the privilege of looking at one of Henry Patton's animated computer models for the growth and waning of the Devensian Welsh ice cap.  These models are very sophisticated as well as being exciting to look at -- if you are into this sort of thing.  I was reminded of some of the earlier computer simulations too, from Alun Hubbard and others, which I have discussed in earlier posts.

On this blog I have to admit to a preoccupation with lines -- many of my posts are concerned with the precise positioning of the Devensian ice limit, or the Anglian ice limit, or the extent of permafrost of various kinds.  Geologists and geomorphologists draw lines around areas of certain types of sediments or landform assemblages, although we all know that in reality what we have are fuzzy zones and transitions, with very few SHARP contacts between one zone and another.  OK -- we are just trying to simplify things and to make them more comprehensible to ourselves and to those who might read our learned papers. We are not being deceitful in doing this, and we are certainly not guilty of scientific fraud, but we are distorting reality.  In some of my field maps of glacial deposits, I know full well that in an undulating landscape of tills and fluvio-glacial deposits it is incredibly difficult to draw lines showing where the transitions are; I might draw a line HERE, and another field worker, in all honesty, might draw it THERE.  Sometimes these transitions are referred to as "feather edges" rather than lines -- and that's a nice descriptive term.

Back to ice edges.  What Henry's animations show, when several thousand years are compressed into a second, is that there is a sort of flickering at the ice edge as it advances and retreats across the landscape.  The ice cap edge, even on the models, is artificially sharp -- and in reality what we have, especially in a waxing ice situation as a glacial episode deepens and as the ice inexorably expands, is a snow-covered landscape with hill summits beyond the glacier edge supporting their own semi-permanent snowfields, ice fields or even small upland ice caps,  all waxing and waning seasonally and over decades and centuries.  The ice cap does not start in one place and gradually spread across the landscape, engulfing everything that lies in its path -- instead, it grows through the coalescence of many small local ice caps on all of the upland areas of Wales.  Gradually, these little ice caps join together until the main ice cap has a critical mass -- and then there is a major expansion involving a sort of positive feedback mechanism.

If you have the right plugins on your computer, and good broadband, have a look at the animations here:
http://www.aber.ac.uk/en/iges/research-groups/centre-glaciology/research-intro/britice-model/

So what are the implications of all this for the Anglian and Devensian glaciations?  Watch this space...

The other trouble with drawing lines is that they commonly reflect isochronous events, unable to represent time-transgressive processes. A glacial 'maximum' limit at the ice-sheet scale will almost certainly not represent a contemporaneous event.

Will have another look at the model, if I can get it to work on my Apple Mac.....

Very impressive and dramatic, Henry. Works a dream -- now why can't I get any joy at all when I try to run the simulations on the Aber BRITICE site? Masses of faffing about with Google Earth plugins etc, and they still don't work. Have you got the secret of universal communication?

When I asked them to update the webpage a while back, the admins converted all the files and embedded them into a word document for some reason. Will try and get it updated again in the near future to make it more user friendly. FLV files aren't common either, though VLC player will play them.

The GE files will always be a bit cumbersome..there are around 560 images to make up each Britice simulation (~6mb total) so takes a bit of time to download each individually. I may consider changing it so that the files can be downloaded then loaded into GE locally, making it a bit quicker.

If people can't open the word file, and they have enough patience, then the files can also be downloaded here (E102b2) and here (E109b2).

Ah -- that explains it. I don't have Word on my new Mac -- and generally have as little as possible to do with Microsoft and Bill Gates.......