The Monsters from Daylight Rock (1) 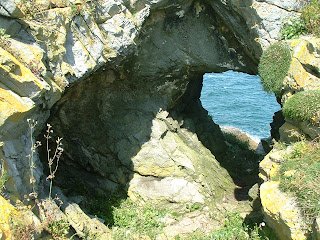 This is a photo of Daylight Rock, one of the key locations in unravelling the story of the Ice Age in Wales.  It's near the eastern end of Caldey Island, off the south Pembrokeshire coast.  This is where a piece of bone from a cave lion (pictured below) was found long ago, in a deep crevice (there is no actual cave here, unlike Nanna's Cave, Potter's Cave, Eel Point and Ogof-yr-Ychen).  There is quite an assemblage of bones from these Caldey sites:  woolly rhinoceros, cave hyaena, cave bear, horse, lion or tiger, mammoth, hippopotamus, brown bear, giant Irish deer, bison, wolf and reindeer.  This is a typical Ice Age cold-climate menagerie from the late Pleistocene -- and the radiocarbon dates confirm that some of the animals were alive on the island )which would not then have been an island) around 20,000 - 25,000 years ago.  One of the rhinoceros bones found by Brother James in Ogof-yr-Ychen was dated at 22,340 yrs BP, and other dates from South Wales caves seem to cluster around 22,000 - 28,000 yrs BP, with some outside this range also.  There is one older date for a reindeer bone which is around 30,000 yrs BP. 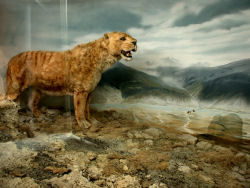 While there has been much discussion of the accuracy of the radiocarbon dates for all these Ice Age samples, including errors introduced post-collection storage and down to groundwater and other types of ground contamination, and down to the nature of the diets consumed by the animals (including humans) that have been dated, not a lot of dabate has centred on the position of the Devensian ice front in the period we are talking about.  The peak of the Devensian glaciation (ie the time of most extensive ice) is assumed to have been somewhere around 23,000 - 20,000 BP in this area -- maybe the timing was different elsewhere.  That becomes very intriguing -- there is no obvious "break" in the sequence of C14 dates between 18,000 and 30,000 yrs BP.  Does that mean that the Devensian ice never reached Caldey Island, Paviland Cave or any of the other Pleistocene bone caves found in the Carboniferous limestone areas of South Wales?

Quote:
"................. the majority of the abundant bone from the (Eel Point) site was sold by the quarrymen for manure, or simply dumped into the sea (Smith, 1860). Species noted as present by Smith, Laws and W. Boyd Dawkins include woolly rhinoceros, cave hyaena, cave bear, horse, lion or tiger, mammoth, hippopotamus, brown bear, giant Irish deer, bison, wolf and possibly reindeer. Investigations were renewed in 1950 by van Nedervelde and W. F. Grimes, but by then it seemed that quarrying had largely destroyed the cave (Lacaille and Grimes, 1955). However, persistent investigations by van Nedervelde led to the discovery in 1986 of sealed ﬁssures containing more Pleistocene fauna (Davies, 1989; Davies and Smith, 1989). Pleistocene faunal remains and stone tools are well known from most of the Caldey Island sites, although the association between the two is far from certain. A deep, inﬁlled swallet at Ogof-yr-Ychen was found to contain the bones of rhinoceros and hyaena together with many red deer antlers, as well as two struck adinole ﬂakes and one chert ﬂake (David, 1990: 22). Adinole is a raw material usually associated with Upper Palaeolithic tool assemblages in Wales. A radio-carbon determination of 22,340 G 620 BP (Birm- 340) was obtained on one of the rhinoceros bones (van Nedervelde et al., 1973)."

Can you tell me more about this photo of the Daylight Rock? How is the opening closest to the viewer oriented on site? Is it facing N, NE or some other direction? The geomorphology of the surrounding area is also important to understand.

Looking at this photo, it seems to me this hole bore through the obstructing rock by great concentrated torrents of rapid water streams consistently flowing over long periods of time coming from the direction of the viewer. The wider rock mouth rim around the hole seems to suggest this possibility also. Can't imagine such a hole to have been formed by glacier ice flow!

Since you were there to have seen the whole picture, can I ask you to please assess the possibility that this hole was made by water streams flowing from a N or NE direction?

This is a coastal karst area, Kostas. There are sinkholes, caves and enlarged fissures everywhere, resulting from limestone solution processes influenced by bedding and the frequency and orientation of cracks and faults. The geomorphology is very complex -- a bit like the Cheddar Gorge area, but with coastal processes adding complications! This hole has -- in my opinion -- nothing to do with either meltwater flow or glaciers.

I know you have a different view of this! And you may very well be right. Probably are!

But putting aside questions of right or wrong, is the orientation and general characteristics of this Daylight Rock hole in line with what would be expected IF there was (?) water flow and turbulence hitting the Island from NE?

I know the Daylight Rock is located at the very eastern part of the Island and on a narrow high jetty-like rock formation that seems to have obstructed the water flow (?) to the bay as seen through the hole.

The many other land features you mention (sinkholes, caves and enlarged fissures) would also be in agreement with this possibility. The location and orientation of these features may even help support this hypothesis.

“... sealed ﬁssures containing more Pleistocene fauna (Davies, 1989; Davies and Smith, 1989).  Pleistocene faunal remains and stone tools are well known from most of the Caldey Island sites, although the association between the two is far from certain. A deep, inﬁlled swallet at Ogof-yr-Ychen was found to contain the bones of rhinoceros and hyaena together with many red deer antlers, as well as two struck adinole ﬂakes and one chert ﬂake (David, 1990: 22). “

I ask. What plausible reason and process would bring together bones of many diverse animals and human stone tools together and seal them in fissures or caves at Caldey Island?

The most natural such process and most sensible explanation is water streams.

“That becomes very intriguing -- there is no obvious "break" in the sequence of C14 dates between 18,000 and 30,000 yrs BP.  Does that mean that the Devensian ice never reached Caldey Island...”

Well we know that the Devensian did reach Caldey Island, thanks to your discovery of the till. So what could be the reason for the “no break” in the C14 dates?

Let me suggest that the reason that there is “no break” in the C14 dates is because these bits of bones came from the mountains of Wales to Caldey carried by meltwater or ice streams. That would allow for the Devensian reaching Caldey and the bones too!

Every which way we look at the evidence, Brian, we find explanations consistent with my theory!

The beach terraces at Caldey? There is an explanation for that too!

Kostas -- you sound like Velikovsky years ago, with his catastrophic explanations of almost everything! Please forget this idea -- the bones and teeth are widely scattered through the deposits, and the deposits are not water-laid. There is a lot of gravelly and angular material in the cave sediments -- so that suggests slow accumulation under cold-climate conditions.

The raised beach has nothing to do with any of this.

Yes, the "continuum of radiocarbon dates" is intriguing. what it suggests to me is the presence of animals and man in this area, even while the glacial episode was going on -- and a very short-lived glacial expansion, maybe lasting just a few hundred years......

Regarding Daylight Rock, there are other arches like this in the limestone area -- typical karst. There is no evidence at all of meltwater flow in torrents from the NE or anywhere else -- apart, maybe, from the slight meltwater channels near Red Berry Bay, which suggest some meltwater flowing from W towards E at the end of the glacial episode.

… I'm following your evidence to places you dare not go! But someone has to …

As for my “catastrophic explanations of almost everything!”, nothing could be further from the truth. But I can understand why you may think that, with the use of terms like Great Melt and Big Freeze! These are embellishments for emphasis.

I am also guided in my descriptions by articles I've read on the Internet. And the Historical record certainly indicates some extreme events (if not catastrophes as you would imagine them) during the geological times we are discussing. But why quibble over details when the big picture is glaring in front of us?

What human and animal activity would seal bits and pieces of bones along with stone tools in deep and narrow fissures in the rocks Brian? It seems to me the only way this could have happened is through the action of water, in one form or another. The fact that such sealed fissure and caves containing bones are found in the eastern and northern parts of Caldey Island suggests to me that the direction of such water flow was from the east and north.

And this perfectly explains the C14 “no break” in the carbon dating of these bones.