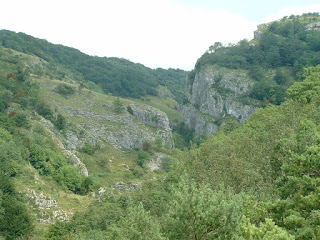 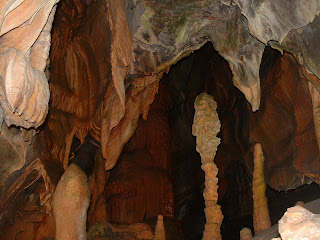 Above:  Cheddar Gorge from near the viewing platform.  Below: Stalagmites, stalactites and other flow features from Cox's Cavern

On the way home from Sweden, we called in on the family in Somerset and had a day out as tourists in Cheddar Gorge.  It's very many years since I was there last -- and the tourist industry has taken over......

But the visit got me thinking about the gorge and its relationship to the events of the Ice Age.  It is indubitably a very spectacular feature, but everything is relative, and it's really quite small fry when compared with the other great gorges of the world.  So how was it formed?  As indicated in earlier posts, there are essentially 3 theories:

1.  The gorge was formed by the collapse of a series of linked limestone caverns.  This theory is now largely discredited...

2.  The gorge was formed by glacial meltwater, as suggested or implied by Geoffrey Kellaway and as argued by Megan Siever and others over the years.  The establishment doesn't like this idea, because it doesn't fit with where the ice edge is supposed to have been either during the Anglian or Devensian glaciations.

3.  The gorge was formed by snowmelt torrents during periods of periglacial / permafrost conditions.  This is the standard spiel given by the Cheddar tour guides and indeed by most geomorphologists.  Here is the BGS summary:

Contrary to popular belief, Cheddar Gorge is not a collapsed cavern, but a fine example of a gorge cut by a surface river, and since left high and dry as drainage went underground. The gorge was formed by meltwater floods during the many cold periglacial periods over the last 1.2 million years. During these arctic episodes, the development of permafrost blocked the caves with ice and frozen mud. Snowmelt floods during the brief summers were forced to flow on the surface,  carving out the gorge in the process.   Each successive periglacial episode caused further erosion. During the warmer interglacial periods, drainage was underground, creating the caves and leaving the gorge dry.

I have to say that I incline towards the glacial meltwater view, and I have argued this elsewhere on this blog.  I think that Anglian ice DID reach the Mendips, even though it may not have flowed right over the hills; and I think that the thick gravels (taele gravels) at the mouth of the gorge and elsewhere around the flanks of the hills may be the "torrent debris" associated with large volumes of glacial meltwater.

I also have problems with the precise mechanisms supposed (by most field workers) to have operated in times of permafrost conditions.  How exactly are the snowmelt floods supposed to have originated?  The assumption is that if the Cheddar limestone mass was frozen solid, then these floods would have flowed at the surface, cutting the Cheddar Gorge by mechanical rather than chemical or solutional processes.  But hang on -- the limestone mass could only be frozen solid if the water table was right up at the surface -- and that is very unlikely indeed, given the fact that the gorge is close to the southern edge of the Mendips.  Wet rock can freeze -- dry rock cannot.  It is much more likely that even in a periglacial (permafrost) environment the water table was well down beneath the surface, and that there would still have been downward percolation of snow meltwater into the chambers and caverns that we see something of in Gough's Cave and Cox's Cave.  I need some caving insights into this problem  -- is there any evidence that the whole cave and tunnel system was actually blocked with ice and debris during the big glacial phases?  Or was water always flowing somewhere, at some level within the limestone mass?

The other problem I have is that the drainage catchment feeding into Cheddar Gorge is not that large.  I do have problems envisaging enough snow, and enough snowmelt, to account for the cutting of a very substantial gorge.......

We actually have very few analogies to work from -- but there are some, from Arctic Canada, where limestone plateaux and permafrost coincide.  Watch this space.
Posted by BRIAN JOHN at 13:42