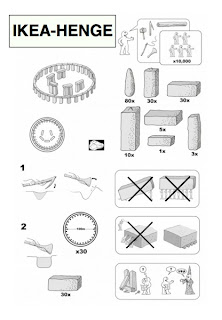 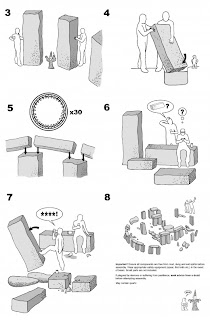 The more I think about it, the more appealing the idea of Ikea-henge becomes!  I really like the thought of these guys (giants maybe?  It doesn't matter) being told by some chieftain or other to get on and build this strange thing out in the middle of nowhere, on some windy hillside on Salisbury Plain. He gives them this flat-pack of bits and pieces, and lays out the instructions for them as carefully as he can.  Then he goes off to sort out some rebellious tribe somewhere, and leaves them to it.
The instructions are clear enough for even an idiot to understand,  so they check that the components are OK, and off they go, making sure that they don't do anything stupid, and consulting Merlin now and then for technical support.  At first all goes smoothly enough.  Many decades pass while the work is going on.  But then things start going wrong.  Some of the builders die off, and some of the others get fed up and wander off to other projects.  Those who are left get the bits and pieces mixed up, break one or two valuable stones that should have stayed intact, and find that a lot of bits are missing.  They get increasingly mystified and irritated, and at last decide that the whole thing was a lousy idea in the first place.  Anyway, nobody can actually remember what this bloody structure was for, and why somebody, long ago,  should have been so obsessed with it.  So at last they say "To hell with this for a lark!" and wander off, leaving behind them a partly completed shambles, with some of the bits in the right places, a lot of other bits just lying around, and many bits totally missing.  Sounds familiar?
Well, its nice that that version of events is pretty close to what I have been saying for years, and what the 2010 EH publication by Field and Pearson seems to be saying too.
And it's good to see some modern thinking coming into the frame, as far as EH is concerned.  Just right for the Age of Ikea.

By the way, click on the images to enlarge them -- and don't forget to read the small print.  Brilliant!  No idea who did this, but whoever it was, he (she?) had a great eye for detail......
Posted by BRIAN JOHN at 10:14

I think the IKEA henge is from a QI Annual.