The Glaciation of Caldey 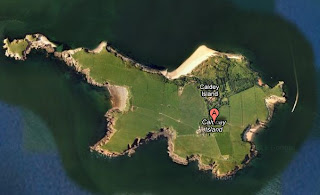 The map above is from the 1950's, and Caldey is mis-spelt.  But the key locations are shown.  The contact zone between the ORS and the Carb Limestone (with gash breccias and a clay band) runs from Sandtop Bay in the west to Drinkim Bay in the east.

Having found that till exposure in Bullum's Bay, I went hunting for more of the same, elsewhere on the island.  Examining the cliff exposures at the west end of the island is extremely difficult,  since there is thick vegetation (mostly gorse and brambles) covering most of the best "exposure" sites, and since there is a herd of semi-wild (ie rather fierce) beef cattle (including cows, very small calves and a bull) roaming about, unconstrained by fences or walls.  So one has to lurk about, trying to avoid these monsters.  The ORS cliffs (south of a line between Sandtop Bay and Drinkim) are generally unpromising, since they are very exposed to wave attack and they are also fringed with thick vegetation.  But from my quick recce I think there may be till exposed in the cliff face of Sandtop Bay on parts of a slope covered with blown sand and small dunes: 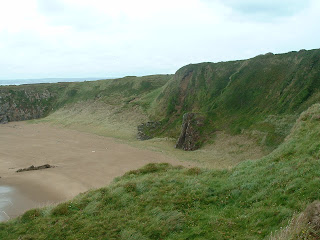 I need to go back there to examine the reddish sediment exposures shown high up on the cliff face at the back of the bay, near the twin rock buttresses -- from a distance this looks like till, but this is precisely where the contact zone between ORS and Carb Limestone runs, and the contact is marked by thick gash breccias, with reddish weathering residues in a network of chaotic fissures.  The locals also refer to a band of soft clay, called "ochre" and which has been used in the past for lining ponds etc.  That has nothing to do with the Ice Age, and it may be of Triassic age......

Note added 1st Sept 2018:  In the Pembroke and Tenby Memoir of the Geological Survey (1921) Dixon refers to a large "pipe" in the NE corner of the bay containing confused (ie non-stratified) fragments of ORS, chert, Lower Limestone Shale, quartzite, greenstone and felsite.  Some of the erratics are up to 12" long.  He refers to the gravelly nature of the deposit, and also says there is a matrix of reddish loam -- not surprising, since this is where the ORS meets the limestone.  This has to be fresh till similar to that observed elsewhere on the island.Dixon says that the "pipe" extends all the way from the shore to the top of the cliff, at about 112 ft above OS datum.

I examined a small stretch of the cliffs between the jetty in Priory Bay and Eel Point, and I think there is thin till on the clifftops and in gullies, overlying a limestone "head" or periglacial deposit.  In places that head looks as if it has been subject to frost-heaving or cryoturbation -- a good sign of permafrost prior to the arrival of the glacier ice.

The best exposure of till I have seen on the north coast is immediately adjacent to the jetty.  If you stand on the roof of the whitewashed public shelter, this is what you see just a few yards away: 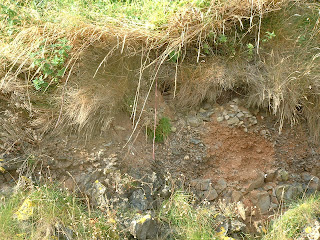 The till is quite thin, maybe up to 1m thick, but it is full of erratic pebbles of all shapes and sizes -- and it looks just like the till found in Bullum's Bay.

The other geomorphological feature of interest on the island is a little group of small dry channels on the clifftop of Red Berry Bay (on the ORS coast of the south of the island) which look as if they have been cut by meltwater spilling over from the west coast between West Beacon Point and Sandtop Bay;  that suggests to me that the direction of ice movement (and meltwater movement) over the island was from west to east.

What we now need to do is to tie in these deposits to the cave sequence for the island, building on the work of Brother James, Mel Davies and others back in the 1970's.......