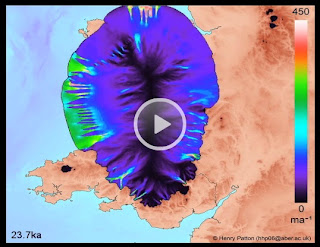 Henry Patton's simulation of the Devensian ice cap near its maximum extent, c 23,700 years ago.  Note the little ice cap over Preseli, detached from the big ice cap which extended out from the upland ridge of Wales.  this little ice cap was far enough to the west never to have been incorporated into the Welsh ice cap -- at least, not in the Devensian glacial episode.

They are highly recommended viewing!  One of them shows a single phase of ice expansion -- with a lot of oscillations and "flickering" -- and the other shows TWO phases of expansion, one around 30,000 years ago and the other 7,000 years later.  Which of those is likely to be the more accurate?  As we speak, Henry is probably trying to decide which of the two alternatives is most closely matched by the evidence on the ground -- and especially in the coastal sections of till and other sediments.

What interests me in particular about these simulations is the appearance, over and again, of small ice caps on all of the main mountains and hill masses of Wales, waxing and waning in response to climatic and other factors, and sometimes lasting for no more than a few dacades.

Note that these simulations only give us a part of the picture. There was another factor -- the Irish Sea Glacier which must have interacted in some way along the northern and western edges of the Welsh Ice cap.  They were probably out of phase, because small glaciers respond to climate change at a faster rate than big ones, but this aspect of the research makes it very interesting indeed.

How long did the Preseli ice cap survive for?  A few centuries?  If we can find the answer to that, maybe we have a clue as to what might have happened during the earlier, bigger glaciations of the UK, just beyond the ice sheet edge.  Here we are talking about Dartmoor, Exmoor, the Mendips, the Cotswolds -- and maybe even Salisbury Plan and the chalk downs?