The Glaciation of South Pembrokeshire

I have been digging around in some of the old records of the Geological Survey -- from about 1905-1938 -- and have found that the old geologists  responsible for the fieldwork in west Wales (Strahan, Cantrill, Dixon, Thomas and Jones) knew all about the glacial deposits scattered across South Pembrokeshire.  In their publications they describe many locations where thin till and glacial erratics are to be seen -- including Bullum's Bay on Caldey Island.  So I'm not the first to describe this till, by any means.  In 1905 EL Dixon wrote of Bullum's Bay:  "..... the glacial deposit appears to overlie the raised beach, although the exposure is obscure, and the evidence of superposition is not so conclusive as in Gower." (Summary of Progress for 1905, Mem Geol Surv, p 70).  He and his colleagues described glacial deposits at Landshipping, in the inner reaches of Milford Haven; till about 7 ft thick at St Florence; glacial sands and gravels at Bubbleton; gravel and sand at Norchard; sandy loam with erratics at Lamphey; and glacial deposits in many pipes and solution hollows at Catshole Quarry, Pembroke, Sandtop Bay on Caldey, and in other places where Carboniferous Limestone is found.  Generally the till in such places is coloured red or pink -- with an obvious association with ORS rocks, and striated sandstone pebbles are also recorded in the deposits, as are pebbles and larger stones of greenstone and felsite.

The Geological Survey maps for the Tenby districts show patches of glacial deposits, as do the maps for the Pembroke and Carmarthen areas.  Some of them are shown on this map, from one of the papers by Prof David Q Bowen: 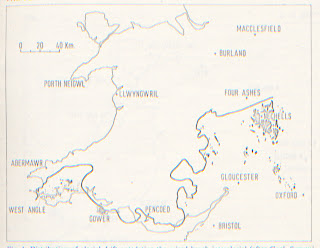 You can see the deposits on the map in the area  (bottom left corner) that was supposedly ice-free during the Devensian.  Somehow or other, in all the research work that was going on in the 1960's and 1970's, we all slipped into accepting that south Pembrokeshire simply had a few patches of very old till left here and there, and that these were by definition "Older Drift" in comparison with the "Younger Drift" deposits found in North Pembrokeshire.  Nobody worked in South Pembrokeshire, maybe because it was deemed to be not very interesting -- and we all took our eyes off the ball.  Before we realised what was happening, this idea of "new" Devensian deposits in N Pembs and older deposits in S Pembs turned from a working hypothesis into a ruling hypothesis.  I criticise archaeologists often enough for allowing their thinking to be determined by a foolish adherence to a ruling hypothesis -- but exactly the same thing happens in other sciences too, including geomorphology.  With respect to the "old" glacial deposits of South Pembs, none of us took the trouble to re-examine the evidence on the ground as originally recorded by Dixon, Cantrill et al -- and none of us gave their descriptions the respect that they deserved. Mea culpa!

Then we all became obsessed with lines.  If you look at the scores of learned papers written on ice limits in West Wales over the past 20 years, they have all been based on the ruling hypothesis that the Devensian ice limit lay somewhere across Pembrokeshire -- maybe a bit to the north or a bit to the south of the line shown on the map above. 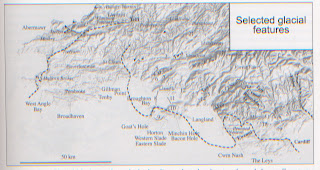 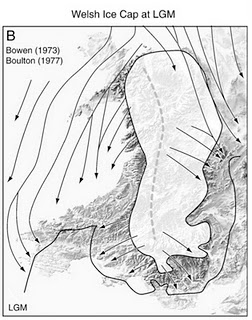 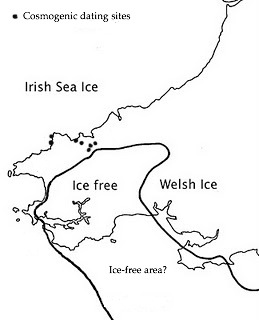 Three maps -- top, by DQ Bowen; middle, by Jansson and Glasser; bottom, from my blog.  the differences are not all that great.  Note that on my map Caldey Island is shown, slap in the middle of the supposed ice-free area during the Devensian.

There has never been any strong stratigraphic or dating evidence to support the positioning of this line, and I am increasingly convinced that we have all been wrong about this ice limit, and that the glacial deposits of the supposed "ice free" area on the map above are actually the same age as those of the St David's Peninsula and North Pembrokeshire.  They are thin and patchy, and have very little or no surface expression (ie there are no mounds or hillocks or obvious moraines, drumlins or eskers) but I think that might be because the glaciation of this area was short-lived and that the ice was thin.  Maybe it was flowing very slowly over frozen ground, and carried very little debris.

I once wrote a short paper called "Ice Age events in South Pembrokeshire" in which I argued that the animal and human remains in the Caldey and other caves dating from approximately the Devensian maximum showed that all these inhabitants were there while the ice edge lay somewhere to the north and west.  In retrospect, that was not a very sensible argument -- and I think we now have to accept that the ice did cross this tundra area, flowing from west towards east, maybe just for a few centuries, forcing an evacuation of all living things -- which then moved westwards again when the ice began to melt, re-colonising their old hunting grounds (or rather, the hunting grounds of their ancestors.)

Hi
This is fascinating stuff, i was wondering if you could give me titles written by Strahan, Cantrill ect, which state about these landforms in Pembrokeshire.
Thank You
H

Hi
This is fascinating stuff!
I have been trying to look for these papers written by Strahan, Cantrill ect, but have came up empty is there anychance you coud tell me the titles.
Also thank you for such a great blog, so interesting!
Thank You
H

Thanks for your comments. There are no papers by Cantrill, Straghan and Thomas -- all their observations were incorporated into the Geol Survey memoirs and field guides to South Wales -- incorporated into various "districts." Published in the 1920's and 1930's, as I recall. Out travelling at the moment -- I'll post the details when I get home.

Hi,
Thank you very much i look forward to your reply
H

These are the Memoirs on the Geology of the S Wales Coalfield -- Part XI Haverfordwest - 1914; Part XII Milford - 1916; and Part XIII Pembroke and Tenby - 1921. All are out of print long since, but you will find them in libraries.

A cursory view of the base landforms of Pembroke suggest a flattening of the whole area by massive piedmont type glacier.. Moving NW to SE presumably the Irish Sea Glacier. This overrode even the highest peaks in Pembrokeshire. Is this the accepted interpretation.

Quite so. This was a very old post you have been looking at. A vast amount of data has been put onto this site since it was published. Suggest that you do a bit of hunting around on the site, using the search facility. More evidence always welcome.....