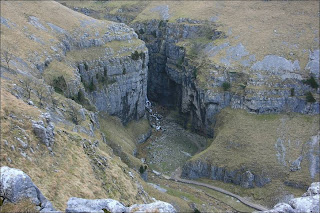 Above: Gordale Scar, near Malham in Northern England

Cheddar Gorge and Gordale Scar are very similar limestone gorges, the former supposedly outside the limit of glaciation and the latter well within it.  Although the gorges share many physical similarities, there is abundant evidence of glaciation in the Malham area, and so it is widely accepted that the gorge was cut by torrents of glacial meltwater -- possibly within the Devensian glacial episode.

On the other hand, Cheddar Gorge is more difficult to explain, especially if you are reluctant to admit to the presence of glacier ice anywhere in the vicinity, at any stage of the Pleistocene.  There is a tendency to fit the gorge into the non-glacial working hypothesis, which means that the gorge has to be explained by reference to permafrost and snow-melt.  But what if (as Megan Siever argues) the gorge is itself evidence of glacial meltwater on a substantial scale flowing down from the Mendip heights, across the southern escarpment and into the lowlands of the Axe valley?  The great quantity of "taele gravels" around the Cheddar Reservoir appears to have come from the gorge -- these gravels are mostly made up of Carboniferous Limestone fragments, and must be the products of mechanical erosion in the gorge.  And since glacial deposits are known from Greylake (not far from Glastonbury) and from the Bath area, it is entirely reasonable to argue that the Mendips were, at one stage (or maybe more!) affected by glacier ice.  Was the ice flowing across the hills, or was it flowing round them, from the west and towards the east, as argued by Hawkins, Kellaway and Gilbertson many years ago?  The answer to this question could be very important, since we need to ask this question:  "Could Cheddar Gorge have been cut by subglacial meltwater?"  My own suspicion is that it was not, but that it was cut by meltwater flowing marginally or from a glacier front positioned over the northern part of the Mendips.
Posted by BRIAN JOHN at 23:00

Could these gorges have formed initially by seismic events or even geothermal hot/cold interactions under permafrost conditions that cracked the limestone strata into wide gaps?

Can't see otherwise what would force the water to 'break through' the limestone so level to the ground. There is no vast enclosure to contain the water and so built up pressure over time. If you look closely at the gorge, the jagged rock protrusions at the twists and turns do not seem to me to have formed by the action of water.

Well, there is always the possibility of seismic events happening in the past, on a scale sufficient to fracture limestone strata and other rocks. But almost certainly these gorges (like most others)are controlled to some degree by fractures, faults and other zones of weakness in the rock. The laws of physics determine the broad direction of any flowing medium, such as water or ice, or even air -- but the details of movement, sudden changes of direction etc will be controlled very largely local conditions. There will be a preferential flow across areas of soft rock rather than hard rock, and fractured rock rather than solid or massive rock. We can refer to this as "turbulence" -- and in general the eroding substance will take the line of least resistance.

With respect to the pinnacles and "jagged" appearance of these gorges, this is typical of karst landscapes -- just type "tropical karst" into Google and see what comes up!

You ask about the source of the water required for the cutting of these gorges. Good point. I'll put up a post about this.

From the photo in your post of Gordale Scar, it appears to me that the gorge is at a bottom of a relatively flat bowl valley. If this is correct, than I ask: “what kind of meltwater 'turbulence' would have cracked open the bottom of a valley?

What would be the geomorphology of an interaction between frozen rock strata over geothermal hot spot? My sense is that the rock strata will crack! What does science tells us?

Not sure why you are so preoccupied with geothermal hot spots, Kostas. OK -- they do exist, but they are extremely rare. One is a Bath, and it would be interesting to know how that might have affected overriding ice, if the Irish Sea Glacier really did reach Bathampton Down at one stage.

Gordale Scar seems to me to be a fairly normal limestone gorge incised into the base of an older valley by a sudden increase in discharge or water pressure -- such as you would find beneath a glacier.

Geothermal hot spots in southern UK during the Devensian play an important role in my theory.

Certainly they presently exist, in Bath and other spots. But it seems to me they would have existed even more prominently in the Devensian. The UK is known to have been a very active volcanic region, especially Wales.

My sense is that if it was possible to map out the subsurface temperatures in Salisbury Plain, such a 'subsurface geothermal map' will match closely to the location of stone circles, henges, round barrows, etc.

Here is a brief outline of what I am thinking:

1) The rapid melting of glaciers created vast lakes, rivers and other such waterways.

2) The quick succession of the Big Freeze lasting some 2000 years (around 8500BC) froze these waterways solid.

3) This 'local ice cover' in some places was over an active geothermal zone with subsurface temperatures higher at places like Stonehenge. (incidentally, recent bore holes near Stonehenge recorded surprisingly high temperatures!)

4) When the ice started to melt again, the ice sheet formed a 'template mold' with retaining cylindrical or oblong basins in the ice, overflow streams, cracks and other such features that lead to the geomorphology of the earthworks, henges, avenues, stone circles, etc.

Brian, strata cracks on high plateaus, gorges, dry valleys and all the other 'anomalies' that have been noted by you and other field geomorphologists are consistent with this theory.

Certainly there may be other explanations to some of these features. But it's hard to see how 'meltwater turbulence' could have created fissures on high plateaus or cracks in the bedrock at the very flat bottom of a bowl valley.

I think these cracks in the rock strata were created through an interaction of cold ice cover and subterranean geothermal hot spots. Certainly the zigzag features of these cracks suggest such action.

You asked why I obsess over geothermal hot spots and I explained. It's not because of my arthritic knees that need some hot springs SPA.

Kostas, you have no basis whatsoever for assuming that there were geothermal "hot spots" all over the place. Just because Wales was a volcanic region back in the Ordovician that does not mean that 'hot spots" will have been around to melt the ice in the Devensian.

The only "hot spot" I am aware of is in the city of Bath -- and there we might have seen some interesting interactions if the ice ever did cover the area.

There are geothermal hot spots all over the place in Iceland, in areas which were glaciated more than once. I have seem many of these hot spring areas, and you can take it from me that there are not circles of standing stones around any of them!

This is a 'working hypothesis'! IF we were to assume there were geothermal 'hot spots', THEN what I am arguing is that all of these 'anomalies' at Mendips and the earthworks at Salisbury Plain can easily be explained.

By 'geothermal hot spots', I don't mean 'hot springs' as these exist at Bath and other places. I simply mean places where the subterranean temperature was higher than elsewhere. The 'surprising high temperature' found in some bore holes near Stonehenge in recent excavations clearly suggests this. And if such 'hot spots' with higher subterranean temperatures exist now, certainly 10,000 years ago these would have existed even more so and more hot.

All this can be verified. I only put forth what intuitively makes sense to me and allows a 'sensible' explanation of all matters Stonehenge. I agree, however, that this does not constitute 'scientific proof'.