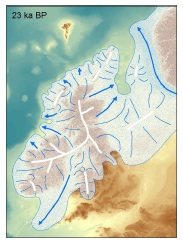 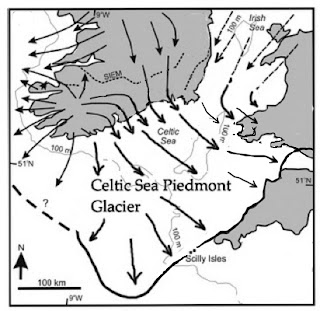 Have a look at these two maps.  They show two fundamentally different scenarios for the Devensian maximum glaciation -- one showing Irish Sea ice flowing in a long narrow lobe from NNE towards SSW -- starting in St George's Channel and extending out into the Atlantic approaches.  That's the scenario accepted by many senior UK geomorphologists today.  As I have argued before, a lobe of this shape is inherently implausible because ice does not tend to flow in long thin lobes when there are no topographic constraints -- it tends to spread out into wide fan-shaped lobes instead.  Also, I cannot see how an ice margin very close to present-day sea-level in the Scilly Islands (if the C14 dates are to be believed) can have also been very close to the same altitude in west Pembrokeshire, more than 200 km away.  that's not just a flattish gradient -- it's a zero gradient.  And however much we might argue about basal shear stresses and saturated sediments on the glacier bed, the basic rule is that a glacier will only maintain forward momentum if it has a continuous surface gradient which accords with the direction of ice movement.

So how do we get an ice edge close to present-day sea-level all the way from Pembrokeshire to the Scilly Isles?  The only way, as far as I can see, is to have the ice gradient sloping down from NW towards SE -- which means powerful ice coming off the SE coast of Ireland, thick enough and active enough to "block off" the ice coming down from the N or NE from the Irish Sea and across Cardigan Bay.  There will also have been contact with Welsh ice, coming down from the uplands of mid and south Wales.  This will give us a very confusing picture in Carmarthen Bay, the middle reaches of the Bristol Channel, and down along the coasts of Devon and Cornwall.  The islands like Caldey and Lundy may be crucial in sorting out exactly what happened.......  and we also need to examine the uplands and coasts of SE Ireland to determine whether the ice was really thick enough to sustain movement right across these Celtic Sea approaches and all the way across to the SW coasts of Wales and England.

The outer limit of Devensian ice shown on the bottom map, from Glamorgan to Devon and Cornwall, may be anything up to 50 km adrift in places.   The field evidence needs to be reexamined in order to sort out its precise position.

I think you will find this presentation interesting, showing multibeam data from the Celtic Sea shelf. The maximum extent is seemingly once open again...
Praeg did a similar presentation at this year's INQUA conference.

Interesting stuff, Henry! What I find interesting is the question of whether these really are streamlined bedforms -- how hard is rhe evidence for that? And what can we assume about age? Are these necessarily Devensian features? Could they be much older -- dating from the Anglian or GBG? Did these guys give any verbal evidence relating to this?

The title of that presentation:

I think they have been assumed to be Devensian based on relative stratigraphy and the distribution of till observed in cores around the basin. No absolute dates yet, though this may change in the next few years.
Rather than being streamlined, I think the interpretation is that they are depositional features - eskers overlain by de Geer moraines as the ice retreated.
Have emailed you another couple of relevant papers referred to in the presentation.

Thanks Henry -- yes, you are right. Should have examined the piece more carefully. So if these really are eskers they should be able to see typical fluvioglacial materials beneath these other little transverse ridges. And I'm not entirely happy about the mechanisms by which De Geer moraines would be "dropped onto" eskers in the fashion suggested.

But if they have got this right, that means grounded ice right down to the -200m contour -- which gets very interesting indeed!

Thanks Anon -- those two papers look very interesting. Didn't know about them -- sorry I can't get at them. Any chance of PDF copies?

Thanks for this, CG:

Hi Brian - you should get access to those papers about the nearshore Celtic Sea shelf at http://www.ucd.ie/gsi/pdf/37-2/celtic.pdf
and
http://www.ucc.ie/research/crc/publications/journals/Irish_Geog_37_2_2004_Waterford_Harb.pdf

For a beautiful multibeam image of the Waterford Harbour palaeochannel (a kml file of 85 MB from the Geol Survey of Ireland for use in Google Earth...better than the earlier imagery in the papers), go to
http://spatial.dcenr.gov.ie/Google/Survey2007/INFOMAR%20Hydrographic%20Survey%20CV07_02_Waterford.kmz

For papers on the age of the Pleistocene deposits along the south coast of Ireland (beyond which these now-submerged systems must have been active), see

and (for a recent update)