The strange valleys of the Mendips 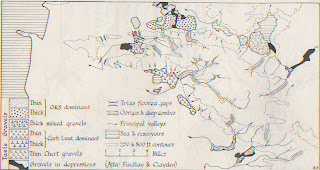 An old map showing some of the key features of the Mendips (Dr Allan Frey, Bristol Univ, 1965).  Click to enlarge.  Both the deposits and the valleys can give us guidance on the Pleistocene history of the area.

Since my visit to the Cheddar Gorge the other day I have been doing some digging -- in an attempt to discover where the water might have come from, for the cutting of the gorge.  I've been looking at old papers by Brian Hawkins, David Gilbertson, Geoff Kellaway and many others, and have come to the conclusion that there is something strange going on at Cheddar and elsewhere.  I'm investigating these strange goings-on from a distance (I'm now back in Pembrokeshire) -- but I know that others who know the Mendips well are also investigating, and I look forward to seeing what discoveries they eventually announce.

I have also been looking at the GCR volume (big and expensive!) on the Quaternary of SW England, and have been rather disappointed to find that the geomorphologists who contributed to that learned tome are increasingly preoccupied with the micro-interpretation of sediment sequences, and hardly ever mention landscape and landform assemblages.  That, in my book, is what proper geomorphology is all about....... so who's doing it these days in the Mendip - Bristol - Bath area?   Somebody, I hope......

If we look at the map above, we can see that there are anomalous valleys all over the place -- some shown here as "Trias floored gaps" and others as gorges and deep combes.  Cheddar Gorge is the most spectacular, but there are steep-sided valleys on all flanks of the Mendips, some associated with thick alluvial fans of spreads of debris beyond the points where they leave the hills.  These valleys are not "normal" in the sense that they are either deeply incised, or difficult to explain by reference to very small catchments, or else simply cut across cols with no normal valley profile, or else take tortuous routes that seem to defy the normal logic of rivers! 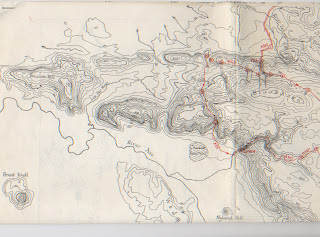 Another of Allan Frey's maps, showing the route followed by students on a geography field trip in the 1960's.  But notice the gaps, gorges and cols all over the place -- the NW corner of Mendip is very interesting indeed....

On the above map Allan Frey has shown all the key valleys of the NW corner of Mendip, and the tight contour map shows the col breaches in particular, including those at Hele Coombe (south of Winscombe), Webbington (the gap followed by the motorway), and the complex valleys in the Shipham - Burrington - Rickford area.    The aerial photo below shows the western area, seen from above the Cheddar reservoir. 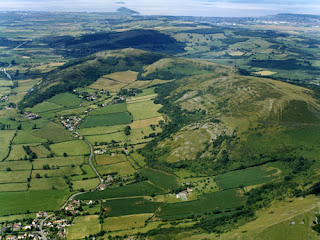 In a small and forgotten paper published in 1971, Hawkins and Kellaway reported on a Bristol /Bath field meeting in 1970 (PGA, 82 (2) pp 267-292) and devoted some space to the "anomalous dry valleys" here and to the north.  They mention Dolebury Channel, Burrington Combe, and the Rickford Valley as being possible glacial meltwater spillways, and they mention a number of other valleys further to the north and closer to the coast -- including the Providence Valley near Bristol, the Flax Bourton gap, and three channels across the western end of the Failand Ridge.  There are other gaps and gorges near Avonmouth.  Three other channels are also shown on the western end of Broadfield Down, and one between Broadfield Down and Dundry Hill.  We are talking therefore about more than 20 anomalous dry valleys within a fairly small geographical area.   See the 3 maps below: 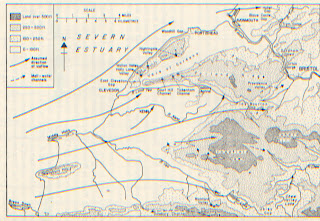 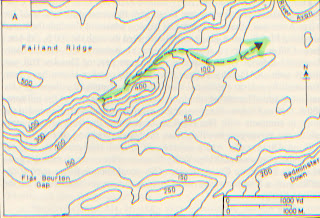 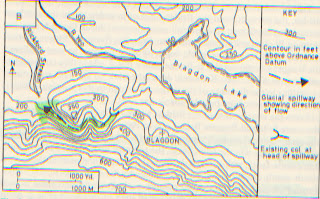 Three maps from Hawkins and Kellaway -- above, map showing postulated ice directions of the Irish Sea Glacier which flowed in from the west; middle, Providence valley; below, Rickford valley.

Speaking for myself, I do not know the geomorphology of this area well enough to know what the meaning of all of these "anomalous valleys" may be -- but given the history of glaciation in the area, we should suppose them to be related to glacial meltwater on some way.  (That is a far more reasonable explanation that the one normally used in the literature -- namely that the valleys are "relics" of some ancient drainage pattern let down upon the present-day landscape.)  Hawkins and Kellaway do get themselves into a spot of lather by assuming that the channels are "spillways" or overflow channels related to the drainage of pro-glacial lakes during the deglaciation of the area.  But that means that they have some of the valleys flowing in a direction which must have been opposite to that of the ice surface gradient -- and that is not very likely at all.  Much more likely that the channels are subglacial channels, with orientations directed more or less by the direction of ice flow.  Some of the channels are indeed humped -- and that is a good diagnostic sign.

So there we are then -- a suggestion that there are many valleys in this area which are of subglacial origin; and another suggestion that the valleys themselves can be used as strong indicators of glacial action across quite a large swathe of country in the Bristol - Bath - Mendip - Somerset area.  Over to those who know the field details far better than I do.......
Posted by BRIAN JOHN at 15:52

For the record, the Bath & Camerton Archaeological Society is running a (fully booked) excursion to Burrington Combe (combined with Stanton Drew Stone Circles) on 11th September, and I am booked on this. The summary information says Burrington Combe contains the entrances to many of the caves of the Mendip Hills, including Aveline's Hole, Sidcot Swallet & Goatchurch Cavern, which show evidence of human occupation from the Bronze Age and before. This will be a 2 hour circular walk in the morning from Burrington to Blackdown Moor, passing some of these caves, which have views to Dolebury Fort and the Bristol Channel.

Interesting, Tony! Enjoy -- and keep us posted on what transpires!!

With ref to the presence of Triassic conglomerates in or near the combe, this is what the SSSI citation says:

"Geological - The site covers the whole of Burrington Combe and also the limestone sections of its three southern tributary valleys. The Combe is a fluvial karst feature comparable in many ways with Cheddar Gorge but showing a close relationship to geological structure. Sinking streams disappear along the limestone shale boundary and a number of caves are intersected by the gorge. In its lower reaches it partly intersects a buried and filled gorge of Triassic age."

This suggests that there was a Triassic gorge, but that it does not coincide with the one we see today.

“Hawkins and Kellaway do get themselves into a spot of lather by assuming that the channels are "spillways" or overflow channels related to the drainage of pro-glacial lakes during the deglaciation of the area.”

Can't say I know how these channels are oriented, but if these cannot be related to “the drainage of pro-glacial lakes during the deglaciation of the area”, could they perhaps be related to strata cracks due to cold/hot interfaces of an ice cover over geothermal 'hot spots'?

Just a thought to think … since drainage flow must conform to the geomorphology of the area while strata cracks do not.

When H and K were writing, there was a great vogue for "overflow spillways" associated with lakes -- but now it is realized that many "overflow channels" were in fact caused bu water flowing either under ice or along the ice edge. Supposed overflow channels flowing in precisely the opposite direction to the ice surface gradient must have more complex origins - and of course subglacial meltwater can flow uphill and over cols.

Almost all strata contain cracks and fissures -- they are called faults! If you look at the geological maps of the Mendips, there are hundreds of them -- and many of them have "directed" subterranean drainage and surface fluvial features. You do not need to invoke hot spots in order to explain the presence of faults.

Let me clarify my reasoning.

Certainly there are many faults and fissures in the rock strata as you well point out. But these are due to pressure stress and shifting of land masses. And they generally are more linear, planar and often somewhat vertical -- distinguishing one 'block' of the strata from the adjacent 'block'. I don't think anyone can argue that the Gordale Scar, for example, is such kind of a fissure or fault. I certainly do not argue this!

But the cracks caused by an intense cold/hot interface will have different characteristics. For example, they would be more on the surface of the strata and not deep into the strata. They will also exhibit a more zigzag pattern than a linear pattern. And they will also be oriented in rather random fashion relative to the land geomorphology. Such cracks in the rock strata will look much like the cracks in a crusty French dinner roll! Not at all like the faults and fissures in your argument to me.

I just needed to clarify this very important point. And not leave the wrong impression with your learned readers of an 'unbaked idea'. I think deep and hard any idea I think. But I also think freely and without prejudgements or fear of rejection. These are also the reasons why I am not afraid to admit when I am wrong and change my mind when I am.