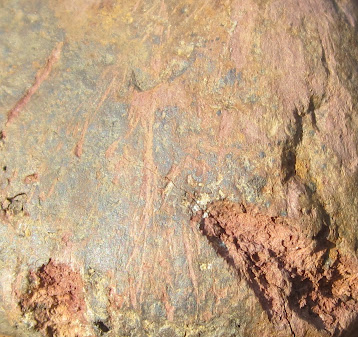 Close-up of the cobble surface.  The area covered is 4 cm x 3 cm.  So these features are best described as micro-features.
On "pressure point fracture scars" (for want of a better phrase........)

This is a close-up of a photo I have looked at before -- showing the crossing striations on the surface of a red sandstone cobble found in the excavations at Penblewyn, near Narberth.

https://brian-mountainman.blogspot.com/2022/09/the-penblewyn-ors-erratics-interesting.html
I am more and more intrigued by it -- and more and more convinced about its significance.  The crossing striations are obvious enough, and it is clear that they are incised into a veneer on the boulder surface, exposing the red rock beneath.  The veneer must be a weathering product, associated maybe with manganese oxide precipitation.  Was the veneer created in a non-glacial interval between two glacial episodes?
Could the cobble have been picked up from a fluvial deposit overrun somewhere up-glacier?  It's quite well rounded and can easily be held in one hand -- so its quite small, but it was found in close association with other red marl boulders that would have been too large, I think, for a strictly fluvial origin -- suggesting an original glacial source.  This idea is supported by  traces of facets on the cobble and also on nearby boulders, and also old pressure point fracture scars that have been smoothed off  -- that's quite typical of glacially transported blocks and also ice moulded rock surfaces. See below........
Here are some more images.  The more I look at them the more convinced I am that sharp-edged hard tools have been used on the glacier bed to break through a hard crust or veneer and to expose rotten weathered sandstone beneath.  So weathering has more than a little to do with it, as suggested to me by Prof Dave Evans.
But yes, what we have here, I think, is a stone that has been subjected to two phases of glacial transport and modification, separated by a non-glacial interval during which weathering and veneer precipitation took place.
Sounds familiar?  I said something very similar in my interpretation of the "Newall Ignimbrite Boulder" which is stored in Salisbury Museum......... 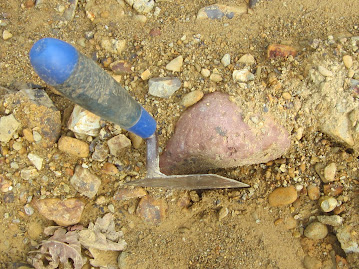 Another red marl boulder embedded in the sandy till at Penblewyn 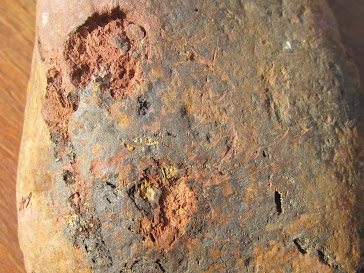 Close-up of the surface of the small boulder, showing the rotten material that has fallen away following the initial "puncture" of the crust by hard tools on the glacier bed. 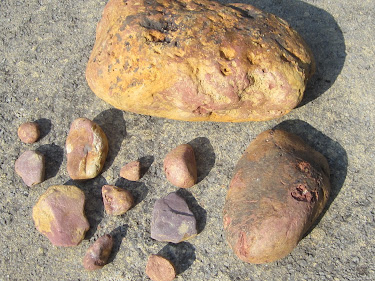 Red marl boulders and pebbles found near Penblewyn.  The cobble featured in the close-up photos is at bottom right -- it's about 13 cm long. 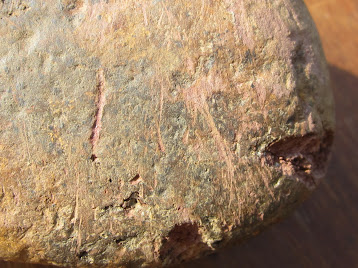 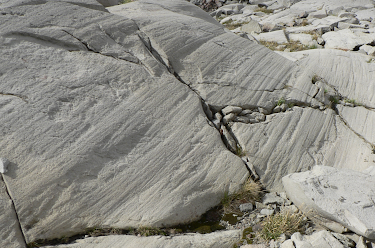 On ice moulded surfaces such as these, pressure point fracture scars are common.  We can see several generations.  Some of the scars are vert fresh, and others have been modified by abrasion since they were formed.  Often the gouges or scars are seen on pre-existing cracks or fractures in the rock, and we can speculate that this is the first stage in block removal on the glacier bed.......... 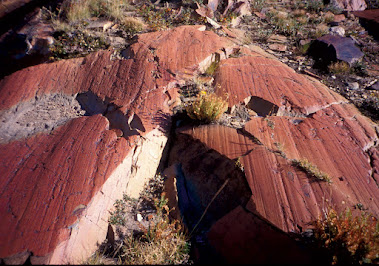 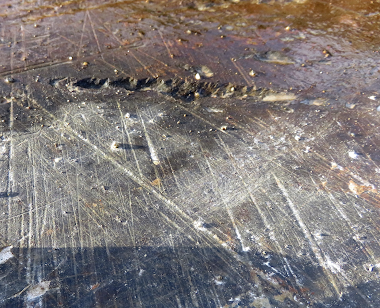 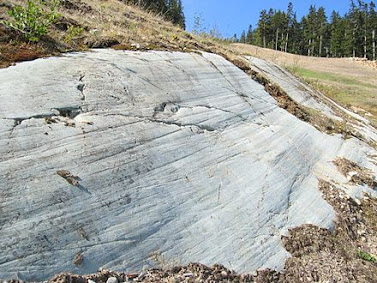 Pity your friend Professor Dave Evans hasn't yet managed to take a trip down from Durham University to scrutinise the 1924 Stonehenge Boulder dug up by Newall back then.