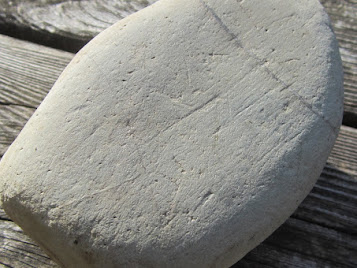 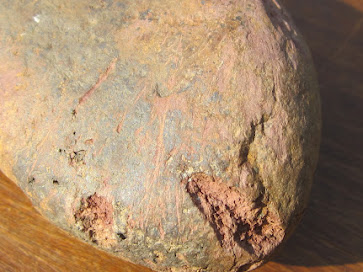 Striations on a weathered surface of an ORS boulder -- found in till near Penblewyn Roundabout, central Pembrokeshire.  Evidence of an ancient erratic and a Late Devensian glaciation?

I no longer believe that there was an ice-free or permafrost enclave or corridor over most of South Pembrokeshire at the height of the Late Devensian glaciation. The accumulating evidence is as follows:

1.  The assumption of an ice-free enclave or corridor comes initially from an assertion by Charlesworth that South Pembrokeshire, south of his imagined "South Wales End Moraine", was an area of "Older Drift".  This was carried through by DQ Bowen and others who thought that there was a pre-Devensian "Penfro Till Formation" across the landscape to the south of Mynydd Preseli.  However, the type localities (West Angle and Llandre) are worthless and have never been adequately described.  At one of them, there is no till, and at the other the stratigraphy has been misinterpreted.  There are ancient till deposits in Pembrokeshire, but not at those two named sites.
https://brian-mountainman.blogspot.com/2022/04/the-penfro-till-formation-geological.html 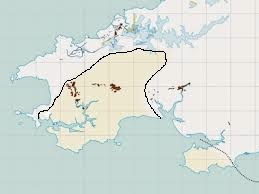 The BRITICE map of glacial deposits in the supposed Devensian ice-free area of West Wales.  The line shown is not based on reliable field evidence.  It is assumed that the glacial deposits shown in brown are pre-Devensian in age.  The line shown cutting diagonally across Mynydd Preseli makes no sense to anybody who knows the topography.
2. There are many more extensive spreads of glacial and fluvio-glacial deposits than those shown on the map above,  in the areas deemed to be outside the LGM limit. Some of them, at least, appear quite fresh, and some even have surface expression. They are by no means all "degraded or denuded" and they are not restricted to hilltops or interfluves, as claimed by some.  The evidence of these extensive deposits is portrayed on the BGS map viewer.
3.  Recent roadworks in the Redstone - Penblewyn - Llanddewi Velfrey area, north of Narberth, reveal up to 8m of glacial and fluvio-glacial deposits across the landscape and unmapped by the BGS.  These are just as fresh and unweathered as the deposits of north Pembrokeshire, and there is no reason to assume that these are any older.
https://brian-mountainman.blogspot.com/2022/09/llanddewi-velfrey-glacial-deposits.html

4. The glacial and fluvioglacial deposits in the valleys and on the clifftops of South Pembrokeshire are so abundant and so fresh that they have to be Devensian. The exposures occur at multiple locations including St Bride's Haven, Westdale, Dale, West Angle, Freshwater West, Swanlake, Flimston, Stackpole Head, Lydstep, St Florence and Ragwen Point near Pendine.
https://brian-mountainman.blogspot.com/2018/08/south-pembrokeshire-devensian-till.html
5.  The diamicton in Ballum's Bay on Caldey Island which was discussed in Quaternary Newsletter with  Prof John Hiemstra and others is unconsolidated and is similar in texture and appearance to other deposits on the island. It is clearly unrelated to the cemented raised beach and slope breccia deposits in Ballum's Bay which are reasonably interpreted as Ipswichian and Early Devensian in age. I see no reason why the diamicton should not be interpreted as an in situ till, since no evidence has been brought forward to show that it is reconstituted or recycled.
https://brian-mountainman.blogspot.com/2019/07/caldey-island-till-must-be-late.html

6. The glacial and fluvioglacial deposits around Picton Point and Landshipping, right in the centre of the county at the confluence of the two Cleddau rivers, cannot adequately be explained without invoking a complete ice cover across Pembrokeshire. I have another report of fresh till near Haverfordwest.  The sheets of fluvioglacial gravels that partly fill the Western Cleddau valley both to north and south of the Trefgarn Gorge are interpreted as deposits linked to catastrophic Late Devensian ice wastage.
https://brian-mountainman.blogspot.com/2019/11/glacial-deposits-at-landshipping.html
https://brian-mountainman.blogspot.com/2018/11/fluvioglacial-gravels-exposed-at-picton.html

7. There are apparent trimlines and glacial deposits at a variety of altitudes on the northern side of Preseli, up to an altitude of at least 340m, and possibly as high as 420m. That was probably the altitude of the highest Devensian ice surface associated with Irish Sea ice. Ice must have filled the Cwm Gwaun depression, and there are apparent morainic features above and on the south side of the meltwater channel, and at Cilgwyn and Tafarn y Bwlch.  I now think that the assorted morainic ridges and glaciofluvial mounds in and around the Preseli uplands may be associated with retreat stages or short-lived readvances -- still to be defined.
https://brian-mountainman.blogspot.com/2020/10/the-preseli-trimline.html
8.  I am reluctant to invoke ice moulded or streamlined bedrock surfaces as indicators of Late Devensian ice cover.  They occur everywhere, as for example on Carnllidi, near Strumble Head, in Lower Town Fishguard, on Dinas Mountain, on Carningli, and on Carn Goedog and Carn Meini on the Preseli upland. The "denuded tors" between Dinas and Newport are often cited as evidence of a Late Devensian ice cover; and the fragile appearance of Maiden Castle tor, near Trefgarn, is often cited as evidence that it cannot have been glaciated so recently.  But tor survival and modification is a very complex matter, and since ice moulded surfaces might well be inherited features of very great age, caution should be the watchword!
9.  Further, I am reluctant to use the evidence of glacial erratic transport and distribution in support of any LGM reconstructions.  All we know is that certain erratic boulders originated in certain places and ended up in other places, broadly to the south or south-east.  The distances of travel also vary greatly.  Boulders have almost certainly followed zig-zag courses during the Quaternary glacial episodes, and may have been moved on at least three separate occasions.
10.  It's clear that if the concept of complete ice cover on Pembrokeshire during the LGM is to stand up, it must also fit with the evidence obtained in the South Pembrokeshire and Gower bone caves including Eel Point, Ogof yr Ychen, Coygan and Paviland.
https://brian-mountainman.blogspot.com/2020/10/the-late-devensian-ice-edge-and.html
It looks as if the evidence does hold, although great care must be taken because of the uncertainties surrounding radiocarbon age determinations and calibrations. Elizabeth Walker thinks that there was human occupation of some caves on the limestone coast prior to 30,000 years ago, and other occupation by the "Red Lady of Paviland" after 260,000 yrs BP.  There appears to have been a gap.  Tentatively, I suggest that the human occupation and tundra animal evidence does fit around a short-lived glacial episode culminating around 26,000 years ago -- but more work is needed.
===============
So if Late Devensian ice from the N or NW covered Carningli around 26,000 years ago and pressed onto the northern flank of the Preseli ridge at that altitude, it would make no sense for the ice edge to be at or near present sea level around the mid and south Pembrokeshire coast. Nor does it make any sense for an ice edge to be parked around the 200m contour in the vicinity of Wolfscastle and Letterston, as suggested by the BGS. If the ice was coming in from the NW, it MUST have inundated the whole of Pembrokeshire to the south of Preseli, according to the laws of ice physics. The ice edge might of course have been slightly lower on the southern flank of the Preseli ridge.
Because the Preseli trimline is a subtle one, I think there might well have been a thin Preseli ice cap, as suggested in the modelling by Henry Patton and others in association with the modelling of the Welsh ice cap.  The junction between the Preseli ice and the Irish Sea ice is unlikely to have been static, and it will be interesting to see what further modelling work might reveal.
Conclusion:  the simplest interpretation of the accumulating field evidence is that there was no Late Devensian ice-free enclave or corridor in south Pembrokeshire.  The WHOLE of Pembrokeshire was ice-covered at that time, as was Carmarthen Bay and the Gower Peninsula.

What evidence would show a 'frost-free south Pembrokeshire'?

What should we be looking for?

Do you mean ice-free, Dave? Or permafrost-free? In ice-free area would have no glacial or fluvioglacial deposits. An ice-free area with permafrost might well show traces of frozen ground as fossil ice wedges or a "churning" in deposits close to the surface. In quite a few places in Pembs I have seen evidence of permafrost, meaning that there was frozen ground after the glacier ice had melted away. All this in the mysterious 10,000 years or so between ice wastage and the Older Dryas.........