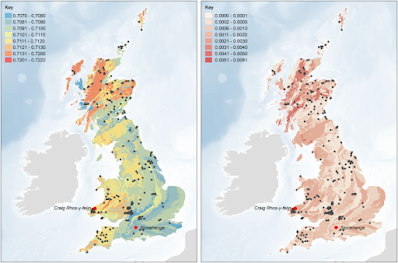 One of the more preposterous maps of recent times -- from the 2018 "Nature" article by Snoeck et al, showing Rhosyfelin on a map of strontium isotope values across Great Britain, based only an a string of wildly fanciful assumptions.

As readers of this blog will know, I have been highly critical of the strontium isotope research which seeks to suggest that some of the individuals found in Stonehenge burials or cremations (and their cattle and pigs) came from North Pembrokeshire.  Having scrutinised a number of papers (and absurd bits or press coverage) I have suggested that the claimed North Pembrokeshire - Stonehenge link is fanciful and unscientific, since no decent evidence has been forthcoming to suggest -- on the basis of strontium isotope ratios -- that the individuals came from N Pembs rather than from any other area of Lower Palaeozoic rock outcrops.  The only reason for the claim is that MPP and his colleagues want it to be true, because it would confirm their somewhat wild claims about bluestone origins and long distance transport.

https://brian-mountainman.blogspot.com/2018/09/does-current-archaeology-actually-read.html
Readers will also be aware of the huge dispute involving Gordon Barclay and Kenny Brophy on the one hand and Mike Parker Pearson, Paul Madgwick et al on the other, relating to the "late Neolithic mythos" that places Stonehenge at the centre of things and seeks to demonstrate how both people and animals were "sucked in" to Stonehenge from distant parts of these islands because it was the centre of power and culture.
https://brian-mountainman.blogspot.com/2021/12/barclay-and-brophy-fight-back.html
In this paper, Barclay and Brophy argued that the isotope analysis of organic remains at Durrington and Stonehenge had been "over-interpreted" by Madwick, Evans and others in order to flag up the "magnetism" of Stonehenge and its political role in "unifying" the disparate tribal groups of far-flung areas. I agreed with B & B.  They suggested that the isotope evidence could more sensibly be interpreted as showing links with areas much closer to hand than the Scottish Highlands and West Wales, such as Devon and Cornwall.
Anyway, there is a new study by Müldner et al:
Putting South-West England on the (strontium isotope) map: A possible origin for highly radiogenic 87Sr/86Sr values from southern Britain (2022)
Journal of Archaeological Science
Volume 144, August 2022, 105628
Abstract

Reconstructions of ancient mobility based on strontium isotopes are only ever as reliable as estimates for baseline values of bioavailable strontium in the study area. Current biosphere mapping for Britain suggests that there are no sizeable areas hosting 87Sr/86Sr values above 0.714 south of Cumbria. As a result, archaeological humans or animals with such (for Britain) ‘highly radiogenic’ strontium isotope values are commonly interpreted as having moved either from Scotland or abroad. This paper presents the first dedicated strontium isotope map for South-West England based on 98 modern biosphere samples (including 68 new measurements). Numerous samples from the Cornubian granite (Dartmoor) have 87Sr/86Sr values above 0.714 (maximum 0.7287) and, based on their distribution, it is suggested that the previously elusive ‘highly radiogenic’ values are characteristic for areas where the soil has with high rubidium concentrations. These occur at lower elevations which are better suited for agriculture and permanent human settlement than the high moors. Previous interpretations of archaeological samples from southern Britain may need to be revised considering these new results, but they also highlight the continued need for biosphere sampling and the usefulness of geochemical maps as a routine part of strontium isotope investigations in archaeology.
In short, this article suggests that both the human remains and the remains of cattle and pigs in the Stonehenge area that have displayed high radiogenic values in previous studies may not have come from far distant locations at all.  They may have come from the granite areas of the SW Peninsula, or even closer than that.
See also:
https://the-past.com/news/redrawing-the-strontium-isotope-map-for-the-south-west/
Redrawing the strontium isotope map for the south-west of England
K Krakowka
CURRENT ARCHAEOLOGY
OCTOBER 3, 2022
Quote:
Given this new evidence, the team suggests that previous strontium isotope research should be reconsidered. The highly radiogenic livestock remains found at Durrington Walls, for instance, may not have originated from Scotland. Instead, it may be more likely that the animals had come from the south-west of England (or possibly Wales – since more work needs to be done there). There have also been several Romano-British skeletons found to have very high strontium levels, which had been interpreted as people who grew up abroad. However, given the large amount of tin-mining that occurred in the south-west during this period, this might have to be reconsidered, too. In addition to Dartmoor, there are other outcrops across Cornwall and the Isles of Scilly that have similar characteristics.
---------------------------------
As I have mentioned in earlier posts, when a new technique is used in science, its results are almost always exaggerated and over-interpreted.  It happened with radiocarbon dating, amino acid dating and cosmogenic exposure dating as well.  Methinks it is time for some of the wilder claims about the Durrington Walls feasts and the burials of far-travelled Welshmen to be dumped, along with a lot of other Stonehenge-related nonsense.
Posted by BRIAN JOHN at 10:15