The glacial bulldozer -- fact or fiction? 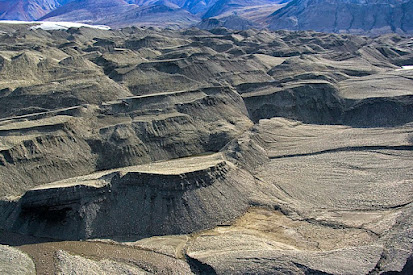 A landscape of push moraines around the snout of Thompson Glacier.  There's dead ice at the core of each of these strange flat-topped hillocks, and when it all melts away the landscape will look very different.

Ice cap outlet glacier on Bylot Island, Arcic Canada. the caption on Wikipedia refers to a "bulldozed" terminal moraine.  It's not bulldozed at all -- the debris in the moraine is carried forward until the glacier loses its energy through excess melting -- and then it is dropped.  It gradually accumulates to form a ridge.

One of the weird discoveries I have made since the opening of my Bluestone Museum is the number of people who believe that glaciers act like bulldozers, literally pushing rocks and other bits of debris across country and thereby moving them from A to B.  They also seem to think that wherever a glacier halts, it marks the position of its greatest extent by leaving a massive terminal moraine.  Ah -- a little knowledge is a dangerous thing.  Neither of these is true.

1.  Although push moraines are known here and there around the edges of modern glaciers, and around the edges of some areas glaciated in the Wolstonian or Devensian glacial episodes, quite unusual conditions are required.  At the snout of the Thompson Glacier on Axel Heiberg Island, for example, the glacier front has been blocked for many years, causing the ice as it moves forward to shear into more or less parallel slices.  These are called shear planes, and debris from the glacier bed is carried up along them to give rise to a very unusual and somewhat chaotic glacier front landscape.  I have been there, and it's very spectacular.  But generally ice does not move forward in a solid mass, fronted by a steep and bulldozing front edge, but by internal deformation, with sliding on the bed where melting is occurring and with the bed stuck to the bottom is the glacier is cold-based.  Rock debris is sometimes dragged along on the bed, but it is more often lifted off the bottom and moved by internal deformation and sliding on shear planes.  The internal dynamics are very complex. Generally much more material is dumped on the bed, or let down from the interior of the glacier during ice wastage, than is transported to the snout.

2.  Terminal or marginal moraines are very spectacular, especially in association with very active glaciers, but if you look at the current edges of ice sheets in Greenland and Antarctica, big edge moraines are conspicuous by their absence. There are lots of small ones, associated with short-lived edge positions.  Ice edges are in general not very static -- they may advance or retreat for short periods during either a period of overall growth or overall decay.  I suspect that even at the peak of a glacial episode, an ice edge may be located at its most advanced position for just a few years.  If it should be static for centuries or millennia, then big terminal moraines may be created, but again rather peculiar circumstances would be required for this to happen.

If you look at time-lapse photography of valley glaciers in the alps or Himalayas the "conveyor belt" analogy is a good one.  Debris is transported up to the glacier surface below the equilibrium line, and then carried forwards, and it is supplemented by debris falling onto the ice surface from the valley sides.  But there is no "bulldozing" as we would understand that word.

So the messages are these:  ice in general does not bulldoze large ridges of moraine in its most advanced ice edge positions, and under optimal conditions a glacier dumps material under and within the ice body rather than at its snout. 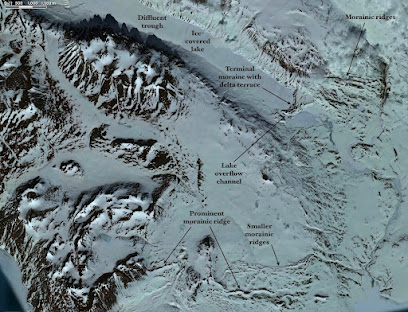 The area which we studied in 1962 -- Kjove Land, East Greenland.  Prominent moraines mark a few locations where the ice edge was static for a considerable length of time -- but across most of this landscape there are no ice edge moraines. 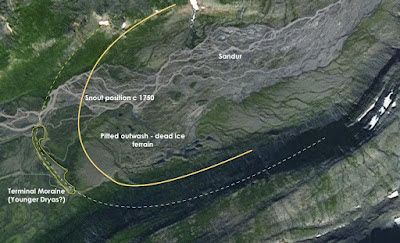 Kaldalon, NW Iceland, where an outlet glacier from Drangajökull has left one prominent terminal moraine marking the greatest ice extent for one advance episode.

Part of the west Greenland ice sheet edge.  Here there is no prominent end moraine, but in other areas there are ice cliffs or large morainic ridges.    Matters are dictated by local circumstances........ 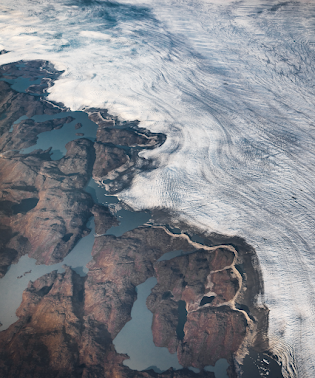 Here is another pic of the edge of the ice sheet in West Greenland. Here we can see edge moraines quite clearly.  They have to represent a "stage" (age unknown) from which the ice edge has retreated. 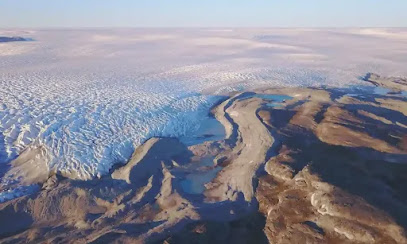 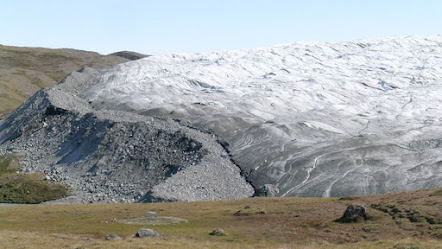 It's interesting that none of the ice edges identified for the various glacial episodes in the British Isles is marked by massive terminal moraines, even where there were known outlet glaciers.  That's why they are so difficult to find in the landscape, and why there is so much controversy.  The words "feather edged" have been used quite often, and they give a much better idea of what most ice limits look like.
Posted by BRIAN JOHN at 22:51