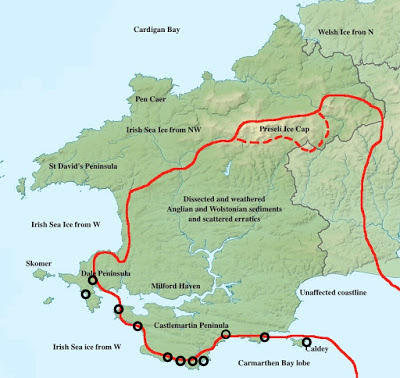 Devensian till exposures in gullies and on clifftops are so frequent in north Pembrokeshire that there is no great point in pinpointing the localities on a map.  But South Pembrokeshire is a different matter, and for decades it has been assumed that the Devensian ice of the Irish Sea Ice Stream remained somewhere out to the west and did not touch the present coastline.  (Bear in mind that sea-level was around 120 m lower than it is today, and that the coastline was somewhere out towards the shelf edge, far to the SW.)

Well, I have been arguing for years that there was something which we can call the Carmarthen Bay ice lobe, and that the ice did indeed press as far east as Caldey Island -- and that if it did that it must also have touched the south coast cliffline in multiple locations.  I didn't have much evidence to go on, apart from some suggestive comments in the old Geological Survey memoirs written by Dixon, Cantrill and others.  Anyway, in the spring of this year I gathered evidence to supplement my earlier observations at places like Westdale, Mullock Bridge, West Angle, and Ballum's Bay on Caldey. Some of the earlier evidence is here:

There is another apparent till deposit at Freshwater West, exposed after freak storm conditions, which I have been unable to examine myself:

You can find other posts by using the search facility on this blog.

In the spring of this year, in the course of three walks along the south Pembrokeshire cliffs (in the company of wife and several friends, who were in much more of a hurry than I was) I found a number of localities where unconsolidated till can be seen on clifftops and in gullies.  I have recorded my observations and photos here:

It's interesting that I have walked these cliffs before, many times, without properly observing or recording these occurrences -- which only goes to show that once an area is researched by somebody, that is not the end of it.  It is very easy to miss things....... and maybe, as you become more experienced and know what you are looking for, you see things that you have previously looked at without realising their significance............

There are amazing similarities between these south Pembrokeshire till occurrences and those in the Scilly Isles.  I will develop this in another post.

The upshot of all of this is that what started in my mind as a working hypothesis is now -- in my mind at least -- a pretty reliable confirmation that the ice of the Devensian ISIS was in contact with the south Pembrokeshire cliffline at least as far east as Caldey Island.  And it's gratifying to see that the field workers of the BRITICE / CHRONO project are accepting this too.  I must try and convince some of those guys to come over and take some samples for cosmogenic dating,  just to add some scientific weight to my simple glacial geomorphology!