This paper from 1972 -- yes, it really was that long ago -- starts to look very important again. This was the paper in which I questioned the placing of the Devensian Irish Sea Glacier edge across north Pembrokeshire -- something that was more or less universally accepted at the time.  I argued that the ice edge must have been somewhere near the mouth of Milford Haven, if not further south, because I could only explain the Mullock Bridge kame terrace as an ice edge feature associated with active ice in the late Weichselian / Devensian episode.  It could not, I argued, have been formed earlier, or later.

I had quite an argument at the time about my radiocarbon dating of shell fragments from the "shelly layers" exposed in the gravel pit.  The dates on two samples came out as around 38,000 yrs BP, which was out towards the limit of radiocarbon dating at the time.  Furthermore, argued my critics (including David Bowen, Fred Shotton and Francis Synge), the dates could not be considered reliable because they came from aggregate samples of small shell samples which might have been of many different ages.  The lab (NPL) was pretty sure the dates were good -- and so was I.  And to show a degree of reliability they tested just one species -- Littorina litorrea -- and came up with virtually the same date as the bulk sample dated earlier.  Littorina cannot live where there is much sea ice -- so I assumed, with specialist advice, that this was an indicator of interstadial conditions preceding the glacial episode responsible for the creation of the kame terrace.  So -- a Middle Weichselian interstadial followed by a Late Weichselian glaciation.  Between 50,000 and 30,000 yrs BP, there seem to have been non-glacial conditions in Cardigan Bay, with quite violent temperature oscillations.  Five or six different "interstadial peaks" seem to be present in the temperature record.

After all these years, by dating and my elucidated sequence of events have not been challenged -- indeed, multiple studies by others in the years that have passed have all come to the same conclusion.  So I consider my hypothesis validated or confirmed.

Below I have copied some of the key pieces of information from the PGA paper. 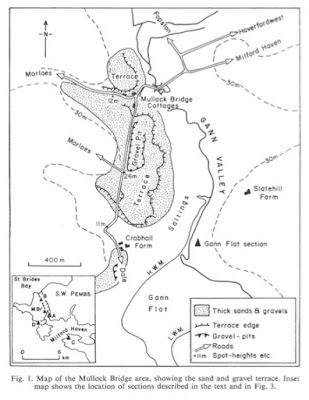 A Late Weichselian kame terrace at Mullock Bridge, Pembrokeshireby Brian JohnDecember 1972Proceedings of the Geologists Association 83(2):213-229DOI: 10.1016/S0016-7878(72)80008-7https://www.researchgate.net/publication/229120558_A_Late_Weichselian_kame_terrace_at_Mullock_Bridge_PembrokeshireAbstractA terrace of fluvioglacial sands and gravels is described from Mullock Bridge, near Dale. From its internal characteristics and morphological relationships it is interpreted as a kame terrace formed during the wastage of the Irish Sea glacier at the close of the area's last glaciation. The stratigraphy of the Mullock Bridge deposits is compared with that from four nearby sites, and, following an analysis of derived marine mollusca in the gravels, two radiocarbon age determinations are reported. Each line of evidence suggests that the last glaciation of the Dale area occurred during the Late Weichselian, and that the limit of the Irish Sea glacier lay at least as far south as Milford Haven. 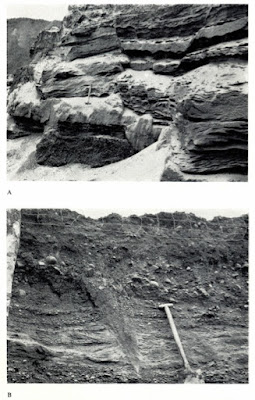 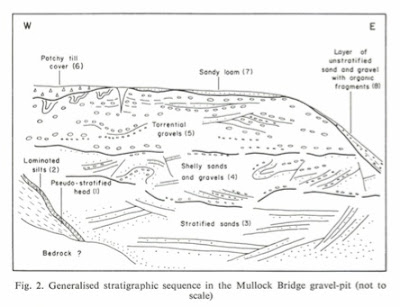 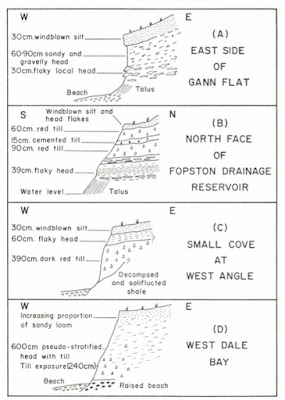 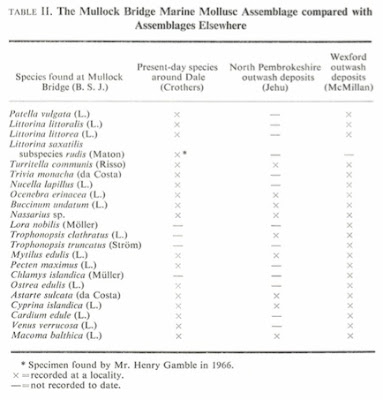