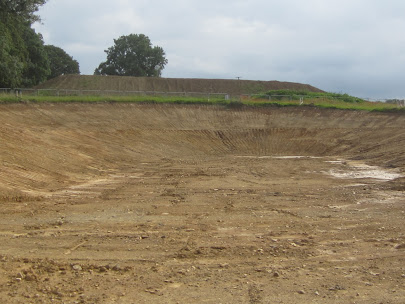 Balancing pond excavation into 5-8 m of till and related deposits near the Penblewyn Roundabout.

Thanks to the good offices of Dave M, I was able this morning to take a good look at the deposits being exposed by the roadworks along the A40 road in central Pembrokeshire.  A major project is under way between Redstone Cross and Bethel Chapel to the east of Llanddewi Velfrey -- a distance of over 6 km.  Mostly this is a matter of road rebuilding and straightening, but there is a looped bypass around Llanddewi Velfrey as well -- with bridges, underpasses and "balancing ponds" designed to take surplus water from road drainage. There are several of these balancing ponds cut into glacial deposits and bedrock, and these are the places where rather interesting exposures are to be found.

Essentially, the old A40 and the route of the new road follow the crest of a ridge running E-W, approx on the interfluve between drainage flowing east to the River Taf and west towards Canaston Bridge and the Eastern Cleddau.  There are a number of deep valleys cut into the crest of the ridge.  Some of them are surprisingly large, given the very small streams that they now contain -- so some might well be glacial meltwater channels.  The geological map shows just one small patch of fluvioglacial gravel and one small patch of till along this ridge; but it's clear from even a cursory examination that the whole of the land surface supports glacial deposits of various types.

In the excavations for a balancing pond at SN 12208 16718 near Penblewyn Roundabout, we can see up to 8m of complex deposits which are typical of complex and dynamic melt-out situations, with bands of stony till, silt layers, clay lenses and meltwater gravels with faults and other glacio-tectonic structures.  There are abundant striated clasts of many lithologies, sizes and shapes.  There are some erratic boulders up to 60 cms in diameter, made of rhyolite, volcanic ash and more local shales, limestones, sandstones, gritstones and conglomerates belonging to the Bala Series (Upper Ordovician) and the Haverford Beds of the Lower Silurian. 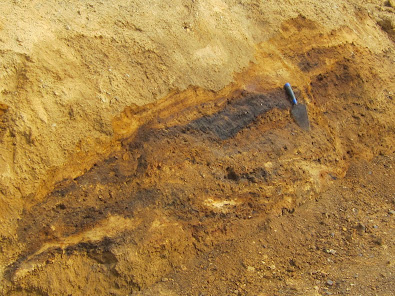 Disturbed till and meltwater deposits -- assumed to be associated with meltout conditions, about 2 m beneath the ground surface near Penblewyn.   Staining by manganese and iron oxides -- but the layers are not cemented.

There is a distinctive "black bed" which can be seen in a number of places round the edges of the balancing pond excavation.  In places it has the consistency of coal dust,  but it does not stain the fingers and I think it is probably a result of manganese oxide precipitation.  Above and below this layer the gravels and meltout tills are heavily stained with foxy red and orange iron oxide -- this is an association I have seen in many other Pembrokeshire sites.

The biggest puzzle relating to the glacial deposits at Penblewyn is the relative abundance of boulders and cobbles of red marls -- coloured bright red and pink.  What on earth are they doing here, 3 km to the north of the ORS outcrop?  Are they derived from ancient river gravels that have been carried northwards from the outcrop and then incorporated into glacial deposits?  That would be vanishingly unlikely, because there is no reason to assume that local drainage ever flowed northwards from the outrop, across the Afon Marlais valley (Lampeter Vale) and up the south-facing slope of the ridge.  I checked the old Geological Survey Memoir for the Country around Haverfordwest (1914) and found that similar deposits from nearby are described on page 221:  "The presence of red marl from the Old Red Sandstone in this drift.........shows that the transportive agency had a certain amount of northerly direction."  The author?  None other than our old friend HH Thomas.    He was confused, and so am I........ 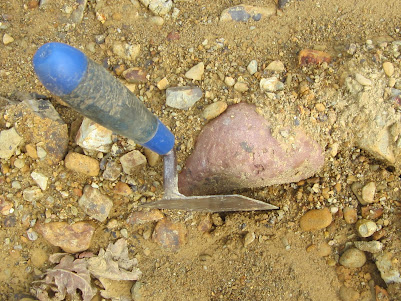 Red marl erratic boulder embedded in till, near the Penblewyn roundabout.

About 100m to the west of the balancing pond and still on the north side of the old A40 road excavations have revealed a classic grey-blue clay-rich diamicton which would, if seen on the north Pembrokeshire coast, be referred to as "Irish Sea Till." I think it is probably a lodgement till.  It is not overlain by any other glacial or periglacial deposits -- just by a loamy and sticky soil layer about 50 cms thick. 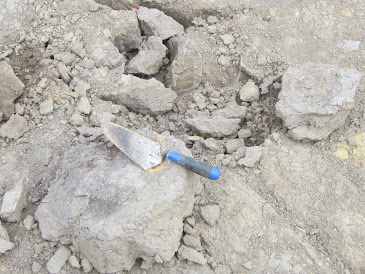 Dessicated surface exposure of blue-grey lodgement till (??) near Penblewyn roundabout.

The till is ubiquitous in all of the exposures seen, lying directly on bedrock of black shales or a lighter coloured sandstone or gritstone.  The silt and clay content is variable, but faceted and striated cobbles are to be found everywhere.  In some places the till appears to be more than 5m thick, and gravelly fluvioglacial layers appear to be present intermittently.

In one location on the site of the Llanddewi Velfrey Bypass, a bed of sticky coherent gray-blue clay about 1 m thick is causing considerable engineering problems; I interpret this as the sediment of an ephemeral elongated lake impounded against an ice edge on the north-facing hillslope.  Maybe it just survived for a few years?  There are occasional dropstones in the clay, and it rests on broken whitish-grey bedrock fragments (grit or sandstone) that do not appear to have been glacially transported. This might be the remains of a periglacial slope deposit of angular frost-shattered fragments. 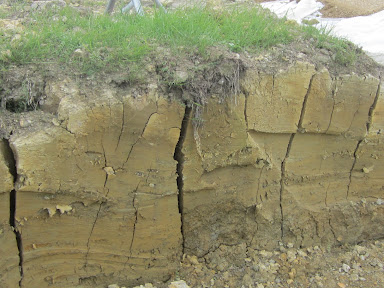 Exposure of relatively clean clay with angular stony debris at its base.
Near Llanddewi Velfrey village.

In this undulating and well-wooded environment it is difficult to see whether the glacial deposits on this ridge have any surface expression.  I have not seen any features that I would refer to as moraines or fluvio-glacial mounds or terraces.  But I do not see any merit in the idea that the glacial traces are "hilltop relics" in a landscape from which most glacial traces have been removed.  Glacial deposits are spread across the whole landscape.  There are no spectacular surface features of glaciation in north Pembrokeshire either, except in a few rare cases, so what we see here matches quite closely the landscape affected by Devensian ice along the greater part of the north and west Pembrokeshire coasts.

So how old are these glacial deposits?  The stained gravels and till exposures are not cemented, and neither are they as rotten as the gravels exposed near Llangolman.  So might they be Devensian in age?  That is possible, since they are not covered by any great thicknesses of periglacial or interglacial sediments.

Many thanks to Dave Maynard for arranging my visit onto the site, and to Alun Griffiths Ltd, the contractors, for permitting me to take a look while the going is good!