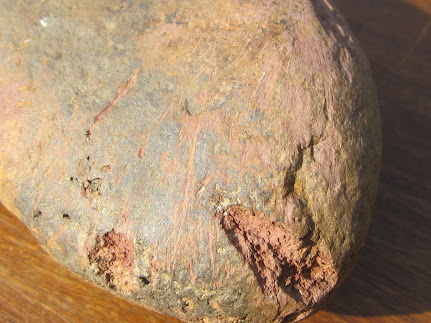 Rounded cobble of ORS red marl taken from the Penblewyn glacial deposits.  Multiple striations are visible, and most of them have been incised deeply enough to have cut through the thin manganese oxide veneer on the surface.  The jagged pressure point fractures are also obvious -- and again these post-date the creation of the veneer. Click to enlarge. 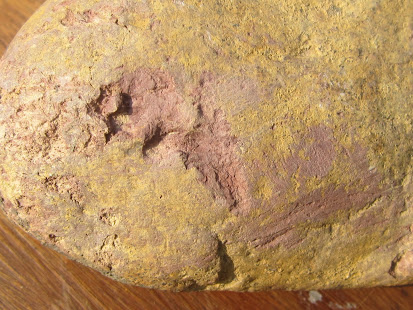 More pressure fractures -- typical of those created during glacial transport -- on the other side of the stone. Here the veneer is orange or yellow in colour -- but it was clearly created prior to the glacial episode that damaged the stone. Click to enlarge.
Yesterday I was somewhat perplexed by the presence of rather abundant erratic boulders, pebbles and cobbles of ORS red marl and conglomerate in the glacial deposits exposed in the drainage pond near the A40 roundabout.  I could not work out how they had been transported NORTHWARDS from the northern edge of the ORS outcrop, c 3 km away.

But this morning I examined very carefully the samples that I had gathered, and I realised that on the two largest stones the veneer of black iron oxide and other minerals had been damaged during glacial transport and emplacement.  In other words, the weathering and mineral precipitation was not post-glacial but pre-glacial.  Or at least prior to the most recent episode of glacial activity on this site.

On the basis of this new evidence I think we can abandon any thought of ice movement from south towards north in this location.  In all probability the ORS stones are part of an ancient deposit of gravels (fluvial?) involving northwards transport -- possibly at a time when the topography was quite different from that of today.

This needs further investigation, but the sequence of events begins to look like this:

5.  Ice wastage and deposition of complex meltout deposits and clay deposition in ephemeral ice-marginal lakes.  Deposits up to 8m thick -- in some cases base not seen.

4. Glacial episode involving submergence of the whole landscape beneath active ice and incorporation of pre-existing deposits into glacial and fluvioglacial deposits.  Deposition of patches of lodgement till.

2.  Weathering and precipitation of mineral oxides on stone surfaces

1.  Pre-glacial or interglacial episode of northwards fluvial (?) transport of gravels and cobbles including ORS marls and conglomerates.

How do you define marl, Brian? I know it as an unconsolidated sedimentary deposit of clay and lime, so the idea of an ORS marl is a new one for me.

Yes, it's a confusing term -- used in a number of senses. Marl can be consolidated or unconsolidated -- in the case of the ORS rocks, the red marls are made mostly of silts, rather than clay and sand. The colour is very distinctive!