More on glacial ripping and rubble till 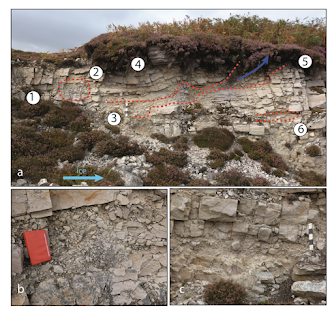 Here is another paper by Adrian Hall and colleagues  -- this time applying their ideas about glacial ripping to the Loch Eriboll area of NW Scotland.  I'm a bit more convinced now -- especially with reference to areas where rocks are flat-lying or where subsurface fractures or bedding planes might be parallel with the ground surface.

I'm particularly interested in the work done on brecciation beneath a glacier and the creating of what the authors call "rubble till".   There is a great deal of breccia, sometimes with pseudo-bedding and sometimes not, beneath the Devensian tills of West Wales, and I have always interpreted this as rockfall debris or as an indication of a long period of periglaciation dominated by freeze-thaw processes and downslope movement associated with a permafrost active layer. Perhaps I have been wrong over all these years?  Perhaps some, at least, of these deposits are indeed associated with bedrock disruption and ripping, as described by Adrian Hall and his colleagues?

And the material described in the past as "rubble drift" in Pembrokeshire -- could that be connected to the processes now described?

Glacial ripping is a newly recognized process sequence in which subglacial erosion is triggered by groundwater overpressure. Investigations in gneiss terrain in lowland Sweden indicate that ripping involves three stages of (i) hydraulic jacking, (ii) rock disruption under subglacial traction, and (iii) glacial transport of rock blocks. Evidence for each stage includes, respectively, dilated fractures with sediment fills, disintegrated roches moutonnées, and boulder spreads. Here, we ask: can glacial ripping also occur in sedimentary rocks, and, if so, what are its effects? The case study area is in hard, thinly bedded, gently dipping Cambrian quartz-arenites at Loch Eriboll, NW Scotland. Field surveys reveal dilated, sediment filled, bedding-parallel fractures, open joints, and brecciated zones, interpreted as markers for pervasive, shallow penetration of the quartz-arenite by water at overpressure. Other features, including disintegrated rock surfaces, boulder spreads, and monomict rubble tills, indicate glacial disruption and short distance subglacial transport. The field results together with cosmogenic isotope ages indicate that glacial ripping operated with high impact close to the former ice margin at Loch Eriboll at 17.6–16.5 ka. Glacial ripping thus can operate effectively in bedded, hard sedimentary rocks, and the accompanying brecciation is significant— if not dominant—in till formation. Candidate markers for glacial ripping are identified in other sedimentary terrains in former glaciated areas of the Northern Hemisphere.
Conclusions:
Application of a checklist of marker features for the operation of glacial ripping in Precambrian gneisses in Sweden reveals that many analogous features are present on Cambrian quartz-arenite in NW Scotland. Hydraulic jacking was driven by the entry of overpressured water along bedding planes and thin quartz-arenite beds and lifted the rock surface and the overlying glacier ice, causing fracture dilation, cracking, and brecciation. Further disruption of the quartz-arenite occurred as traction was applied to the disrupted rock mass at the glacier bed, causing brittle deformation, décollement, and rock block removal. The impact of glacial ripping was variable and controlled largely by the distribution of overpressured groundwater across the former glacier bed. Glacial ripping at Loch Eriboll operated intensively during the last ~1.1 kyr of the last glaciation in a submarginal, terrestrial setting with high discharges of meltwater. The production of large volumes of breccia and rubble till indicates that glacial ripping was an important process for mechanical weathering, glacial erosion, and till production. A literature survey indicates that potential markers for glacial ripping occur in hard sedimentary rocks in many other formerly glaciated areas.
Posted by BRIAN JOHN at 12:26