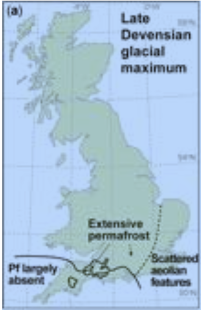 I have mentioned this article briefly in the past, but it now seems more relevant than ever as we try to reconstruct the conditions that might have been experienced in Great Britain before, during and after the LGM.  This is a vast paper -- almost 100 pages long -- and it contains a wealth of information as well as a comprehensive reference list.  I intend to take a more detailed look at it as I try and work out what happened during the growth phase of the Preseli Ice Cap and the Welsh Ice cap and when they were transformed from being independent ice caps into ice domes surrounded by, and maybe partly overwhelmed by, the fast streaming ice associated with the Irish Sea Ice Stream.....

Abstract:
Periglacial environments are characterized by cold-climate non-glacial conditions and ground freezing. The coldest periglacial environments in Pleistocene Britain were underlain by permafrost (ground that remains at or below 0°C for two years or more), while many glaciated areas experienced paraglacial modification as the landscape adjusted to non-glacial conditions. The growth and melt of ground ice, supplemented by temperature-induced ground deformation, leads to periglacial disturbance and drives the periglacial debris system. Ice segregation can fracture porous bedrock and sediment, and produce an ice-rich brecciated layer in the upper metres of permafrost. This layer is vulnerable to melting and thaw consolidation, which can release debris into the active layer and, in undrained conditions, result in elevated porewater pressures and sediment deformation. Thus, an important difference arises between ground that is frost-susceptible, and hence prone to ice segregation, and ground that is not. Mass-movement, fluvial and aeolian processes operating under periglacial conditions have also contributed to reworking sediment under cold-climate conditions and the evolution of periglacial landscapes. A fundamental distinction exists between lowland landscapes, which have evolved under periglacial conditions throughout much of the Quaternary, and upland periglacial landscapes, which have largely evolved over the past c. 19 ka following retreat and downwastage of the last British–Irish Ice Sheet. 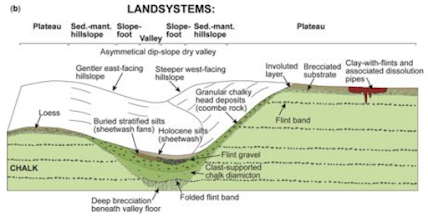 This diagram has some relevance for our understanding of what went on
on Salisbury Plain.....

You write about the Salisbury Plain " Clay - With - Flints Puzzle" on pages 181 - 182 of 'The Stonehenge Bluestones', June. 2018. I have walked near them, north of the so - called 'Codford Circle', where they occur on Clay Pit Hill which is due south of the village of Chitterne.