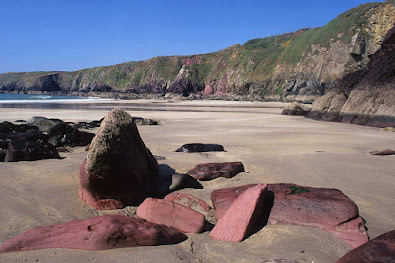 Red Cambrian sandstones on the beach at Caerfai, near St David's.  These red and purple sandstones outcrop in just one small area on the south side of the St David's Peninsula

I have been looking again at those red sandstone boulders and cobbles found in the roadworks near Penblewyn, near Narberth.  There are quite a lot of them in the glacial deposits -- mostly quite small, less than 50 cm in diameter.  They are sub-rounded, but they do have glacial facets on them, and some are clearly striated.  HH Thomas (yes, he of the bluestones) recorded other red sandstone boulders in the area, and assumed they had come from the ORS red marl beds -- which are exposed around 3 km to the south of the find site.

The biggest puzzle relating to the glacial deposits at Penblewyn is the relative abundance of boulders and cobbles of red marls -- coloured bright red and pink. What on earth are they doing here, 3 km to the north of the ORS outcrop? Are they derived from ancient river gravels that have been carried northwards from the outcrop and then incorporated into glacial deposits? That would be vanishingly unlikely, because there is no reason to assume that local drainage ever flowed northwards from the outrop, across the Afon Marlais valley (Lampeter Vale) and up the south-facing slope of the ridge. I checked the old Geological Survey Memoir for the Country around Haverfordwest (1914) and found that similar deposits from nearby are described on page 221: "The presence of red marl from the Old Red Sandstone in this drift.........shows that the transportive agency had a certain amount of northerly direction." The author? None other than our old friend HH Thomas. He was confused, and so am I........
So it is vanishingly unlikely that these red sandstone clasts can have been carried northwards by ice or any other transport medium -- so the conclusion is that they are not from the ORS at all, but from the Cambrian sandstones at or near Caerfai.  That would involve ice transport from the WNW -- within the range of erratic transport directions already established by Griffiths and others.
The only alternative would be that the boulders and clasts have come from some other ORS outcrop in Western Britain -- but such outcrops are rare, and they may not even have the same red and purple colouring........ 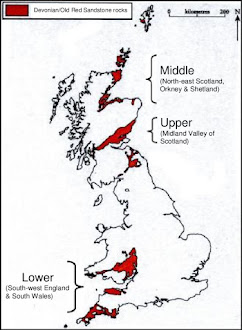 All in all, I incline to the view that the red, pink and purple clasts found in glacial deposits in the Penblewyn - Llanddewi Velfrey area have come from the St David's Peninsula -- but I doubt that they were freshly entrained from bedrock outcrops during the Devensian glaciation.  I am pretty sure they have come from an ancient till deposit somewhere to the west or north.  The boulder surfaces are heavily weathered or rotten, and they still have residues of iron oxide / manganese oxide cement, providing a rather intriguing kaleidoscope of colours!  Patches of concreted gravelly debris still remain, especially in weathering pits on boulder surfaces.  And on the larger boulder collected there are faint traces of striations which cut through the veneer, as seen on the smaller cobble featured in earlier posts:
https://brian-mountainman.blogspot.com/2023/01/jagged-pits-on-ice-moulded-surfaces.html
https://brian-mountainman.blogspot.com/2022/09/the-penblewyn-ors-erratics-interesting.html
That means the boulders and cobbles have been moved in TWO (at least) glacial episodes -- and there must be other ancient till deposits to match those describes at Black Mixen (Lydstep), Witches Cauldron and Ceibwr.  Where are they?  The hunt starts now........ 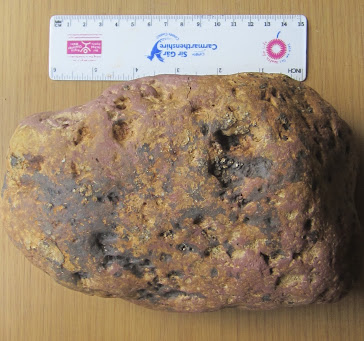 This is a rather battered (and far travelled?) small boulder, faceted, striated and heavily abraded, and once clearly incorporated in a solidly cemented ancient till at a site still be be discovered. 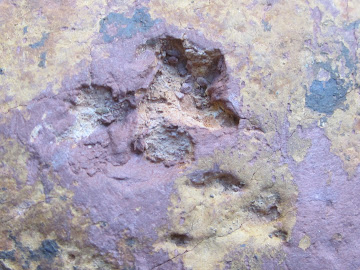 Surface pitting on the boulder, with black cemented gravelly debris in the pits. 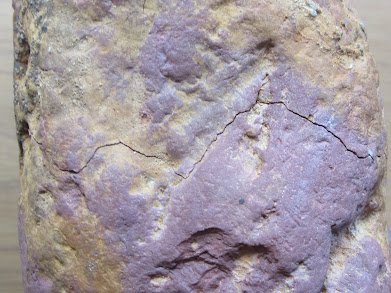 There are hairline cracks all over the boulder, so it is something of a miracle that it is still intact.
Here we can see that in certain light conditions the colour shades towards purple,
like some of the outcrops near Caerfai. 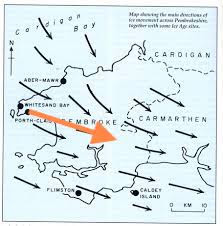 Postulated ice movement direction for direct clast transport from Caerfai to Penblewyn  --
but it might not have been this simple.

There are a lot (relatively) of these sandstone pebbles, I'm constantly seeing them now walking across the job.

If there was a flow of material here from the west, should we expect to find other distinctive rocks from the St Davids' area?

We already have crystals that reportedly come from a very localised area of St Davids, but they were almost certainly carried by Neolithic man, I doubt if the number we have and the archaeological deposits they are found in allows a glacial explanation for these.

Yes, it would make sense for other erratics from that area to be incorporated in the till. Ramsey Island volcanics, for example........ Give me a shout, Dave, if you see anything unusual! re the crystals -- are you referring to worked tools, or just flakes? In surface layers there is no reason why there should not be Mesolithic or Neolithic bits and pieces here and there.....

I'll have to go and have another close look at suitable areas, they change every now and then.

We have a Neolithic pit with several quartz crystals in and yesterday a crystal picked up over what is probably going to be another part of the Neolithic.

The story also ties in to the excavations at Dorstone Hill between Hay-on-Way and Hereford that also has quartz crystals in a Neolithic context. There seems to be only only one location, somewhere on St Davids' Head where these come from. They are not worked, I doubt if they would stand retouching, but are probably some form of talisman.

The excavations at Dorestone Hill features in a recent, 2023 episode of Digging For Britain, which is introduced by Alice Roberts

Has Mackenzie Crook taken over the directing of Digging for Britain? I saw last weeks episode and what with the camera work and background music I could have been watching an episode of The Detectorists.

No idea -- don't watch it myself. I don't suppose it is meant to be reliable -- it's just entertainment.....

Yes, Digging For Britain has these days gone very folkie with its background music etc. Then we have Alice With Her Pink Hair.....but,thankfully, the only time she's been in Pembrokeshire was to Haverfordwest, and NOT to the Preseli Hills!